Dollar Turns to US Data Releases as Yields Spike

With yields going berserk, the upcoming batch of US economic data on Friday could be crucial for the dollar’s fortunes. Personal income and consumption numbers along with the Fed’s favorite inflation metric will hit the markets at 12:30 GMT, before the ISM manufacturing survey is released at 14:00 GMT. Overall, the outlook for the dollar remains positive against the euro and yen.

The Fed is turning more hawkish. Chairman Powell stated quite clearly last week that unless a catastrophe strikes, his central bank will start dialing back its asset purchases this year. More importantly, the new interest rate projections showed the FOMC being split 9-9 on whether liftoff will begin next year already.

Markets seem much more certain though, as the first quarter-point rate increase is now fully priced in for December 2022. This has propelled Treasury yields higher, along with some signs that inflation is unlikely to cool anytime soon amid an energy crisis in China that threatens to exacerbate supply disruptions. The dollar typically benefits when yields spike higher, particularly against the yen. 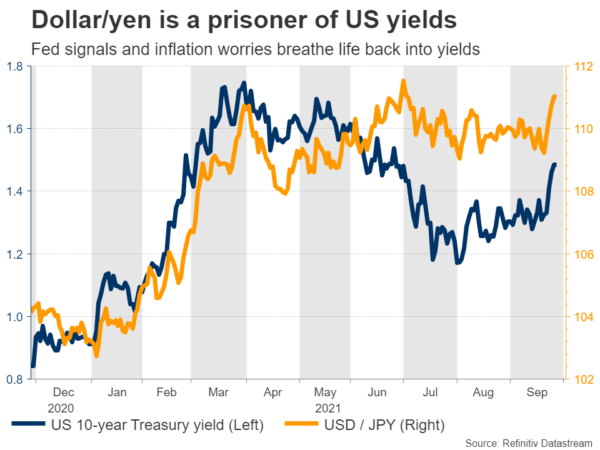 The central question that will drive the dollar moving forward is whether an even earlier rate increase is possible, for instance in September 2022. Markets currently assign a 60% probability to that scenario.

There are several releases slated for Friday, but the most important one is the ISM manufacturing PMI. That’s because it’s a forward-looking indicator. It will reveal whether supply chains worsened further in September and give us an early look into how the labor market performed during the month.

Personal consumption and income numbers for August, as well as the core PCE price index are quite important too, but they usually don’t move the markets much. Investors already have a very good idea of how the economy and inflation evolved in August, so this would essentially be ‘old news’.

In the big picture, the outlook for the dollar seems positive, particularly against the euro and yen. American inflation could become persistent as supply chain disruptions continue to rage, consumption is booming with retail sales being far above their pre-crisis levels, and the labor market could be back to full employment by next year. 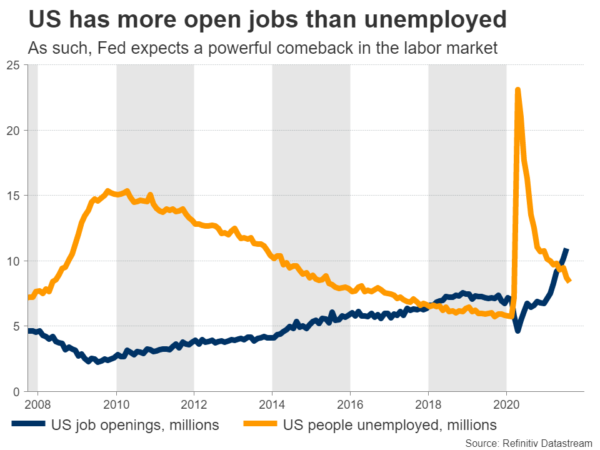 Don’t forget about Congress either. If the Democrats manage to pass anything remotely close to the $3.5 trillion social package they are working on, it could be a real game-changer. It would juice up economic growth for years, and likely push yields even higher on expectations of bigger deficits and a more aggressive Fed.

In contrast, neither the Bank of Japan nor the European Central Bank will raise rates in the coming years. Japan is still trapped in deflation and economic growth is anemic. Meanwhile, European inflation has accelerated lately but that won’t change much for the ECB, which is confident that price pressures will cool once supply chain disruptions ease.

Central banks view inflation through the prism of the labor market. If inflation is hot because of supply problems but your economy is still far away from full employment, inflation is unlikely to be persistent because consumers don’t have the pockets to sustain it. That’s the situation in Europe.

The Fed might be a different story though, as the US labor market recovery is at a much more advanced stage. Hence, the Fed will most likely out-normalize the ECB and BoJ, ultimately making the dollar more attractive from a relative rates perspective.

On the flipside, a reversal lower could encounter initial support near the 110.80 region, before the focus turns towards the 109.05 zone.