Markets Perk Up Ahead Of NFP But Dollar Holds Ground 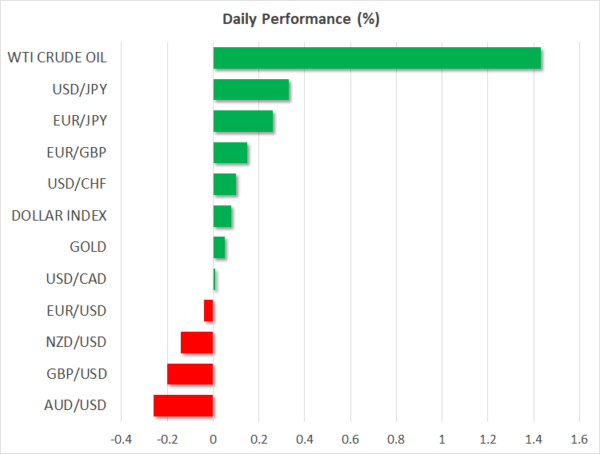 Another rebound on Wall Street on Thursday set the tone for global equities on Friday as risk appetite recovered further after a tumultuous few days. Stock markets were roiled earlier in the week as energy prices skyrocketed, threatening to exacerbate the power crisis and push fragile economies still reeling from the pandemic into a fresh recession. But a halt in the rally – at least for now – in the price of key energy commodities such as natural gas and oil appears to have calmed some nerves.

However, it’s doubtful that this was a one-off wobble in the face of a worsening global energy crisis as reassurances from Russia about more supply should probably be taken with a pinch of salt while the true scale of the shortages in Europe and elsewhere is unlikely to be felt before the winter months set in.

Higher energy bills not only risk fuelling the surge in inflation and cornering central banks into a faster withdrawal of monetary stimulus, but they could have a devastating impact on business and consumer spending just as the fiscal taps are drying up in many countries.

This is where the United States stands out as being somewhat more immune to a major energy shortage as it has more than enough domestic production to meet demand. Furthermore, Congress is not yet done with fiscal packages aimed at reviving the economy. This favourable position is underscoring the US dollar’s safe-haven status.

In the immediate term, however, relief about the passing of a bill in the US Senate on Thursday to temporarily raise the debt ceiling until December as well as some encouraging economic data are likely contributing to the improvement in the market mood.

Now that the threat of the US government defaulting on its debt is no longer hanging over the markets and there’s a strong chance the Democrats will be able to raise the debt ceiling through the end of 2022 using the reconciliation process, investors are hoping that the other major hurdle of reaching a deal on a massive spending bill to be accompanied by an infrastructure package will also be overcome.

In the meantime, yesterday’s stronger-than-expected jobless claims numbers and a solid print in China’s September services PMI this morning are easing worries about a sharp economic slowdown, further boosting stocks.

The S&P 500 closed up 0.8% on Thursday, while the Nasdaq Composite finished the session 1.1% higher. Asian equities were mostly in positive territory today, lifted by Chinese stocks that headed up as trading resumed after a weeklong holiday despite ongoing troubles in the property sector. European shares and US stock futures were mixed, however, as traders awaited the US nonfarm payrolls report.

The US economy is expected to have added 500k jobs in September, which will likely be more than sufficient for the Fed to get the green light to announce tapering in November. US Treasury yields rose in anticipation of this, with the 10-year yield hitting a four-month high of 1.6010% today.

This supported the dollar even as other safe havens like the yen fell against their peers. The greenback was eyeing the 112 level against the yen, while the euro wallowed near 14½-month lows around $1.1550.

The pound slipped back below $1.36 and even the Australian dollar appeared to be faltering. The aussie has been somewhat more resilient during the latest market jitters as it was shored up by higher commodity prices, which are boosting Australian exports, as well as by the gradual easing of the country’s lockdown curbs.

However, it was the Canadian dollar that got the lead among the commodity currencies on Friday as oil prices seem to be gaining traction again, climbing towards the peaks scaled earlier this week. 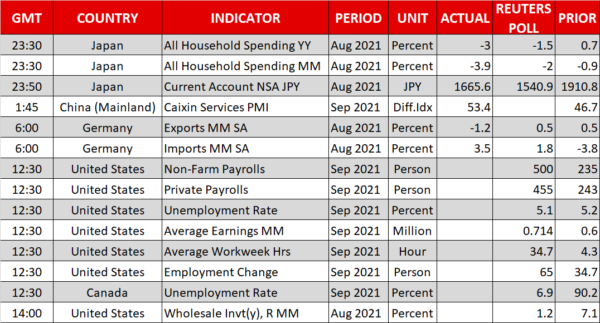