The US dollar was left unscathed from Friday’s disappointing payrolls numbers, with investors sticking firmly to their expectations of the Fed announcing tapering in November. Inflation data and the minutes of the September FOMC meeting due on Wednesday (12:30 and 18:00 GMT, respectively) may solidify those bets, eliminating any remaining doubts that the Fed will soon pull the plug on stimulus. However, given how strongly US yields have been rising lately, there is a risk of a pullback from any surprise softness in the CPI readings, which could in turn weigh on the dollar.

The great puzzle of the US jobs market

The US labour market keeps puzzling economists who are struggling to understand why more people aren’t returning to work even after the generous federal unemployment benefits ended at the beginning of September. The US economy added just 194k jobs in September, defying predictions of a strong rebound following a similarly big miss in August. It seems that many Americans are still cautious about returning to work due to the ongoing prevalence of the Delta variant. Hiring in government education was affected particularly badly as schools reopened amid teacher shortages. 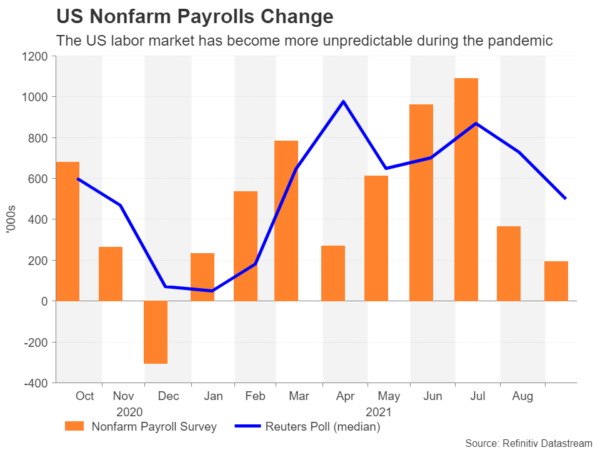 However, not only were the losses in government payrolls possibly overstated by not accounting for teachers engaged in remote learning, other previously hard-struck industries did well. For example, jobs in leisure and hospitality rose by 74k, suggesting that the recovery in the sector may finally be back on track after getting hamstrung by the Delta outbreak.

This should make it easier for the Fed to overlook the weakness in the headline NFP figure and go ahead with tapering at the next meeting on November 2-3, especially as inflation worries are mounting. The consumer price index rose at the fastest pace in 13 years during the summer months and is expected to have stayed above 5% in September.

Analysts are forecasting the month-on-month rate to have increased by 0.3% and the 12-month rate by 5.3%, unchanged from August. Core CPI, which excludes volatile food and energy prices, is expected to have quickened in September from 0.1% to 0.3% on a monthly basis but to have remained unchanged at 4.0% on a year-on-year level. 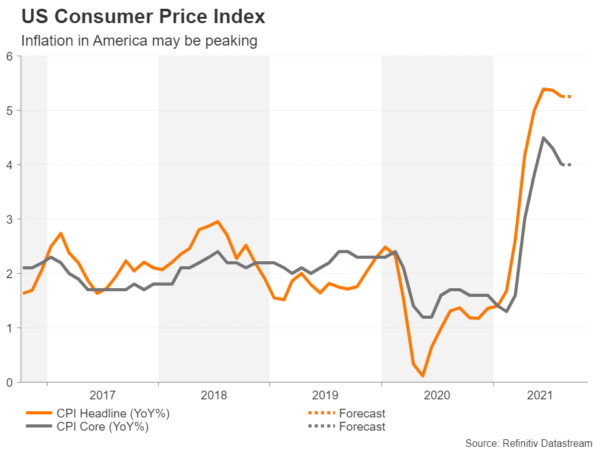 Should the CPI data miss the forecasts hot on the heels of the weaker-than-expected NFP print, markets might begin to question how hawkish the Fed will be in November as policymakers might proceed more cautiously following two back-to-back underwhelming jobs reports. Although price pressures in America are persisting and becoming broader based, inflation may now be plateauing. The fact that the US isn’t experiencing fuel shortages like other countries as it is more energy self-sufficient gives some credence to this view.

Hence, any further evidence on Wednesday that inflation might be past its peak could take the steam out of the rally in Treasury yields. The 10-year yield hit four-month highs on Monday, surpassing 1.60%, boosting the US dollar against the Japanese yen.

The pair has surged towards the 161.8% Fibonacci extension of the July-August downtrend at 113.47 – a near three-year high – and the CPI numbers could determine whether it’s able to break above it. Clearing the hurdle of the 161.8% Fibonacci could see dollar/yen test the 114 level before reaching for the 200% Fibonacci of 114.59.

Alternatively, a downside reversal would turn attention on the 113 and 112 psychological barriers for support before revisiting the October low of 110.81.

Another clue on whether a dovish taper is more likely than a hawkish one will come from the Fed’s September meeting minutes. At the last meeting, the Fed finally took the step of flagging a taper decision, with Chair Powell suggesting asset purchases could be unwound by the middle of 2022.

The minutes could shed some more light on the discussions around the tapering timeline as well as on the timing of the first post-pandemic rate hike. The latter will take priority once the taper debate is over, but the minutes will probably not reveal a great deal more than what Powell has already said and investors will be hoping that the Fed officials lined up to speak this week will provide some fresh answers.