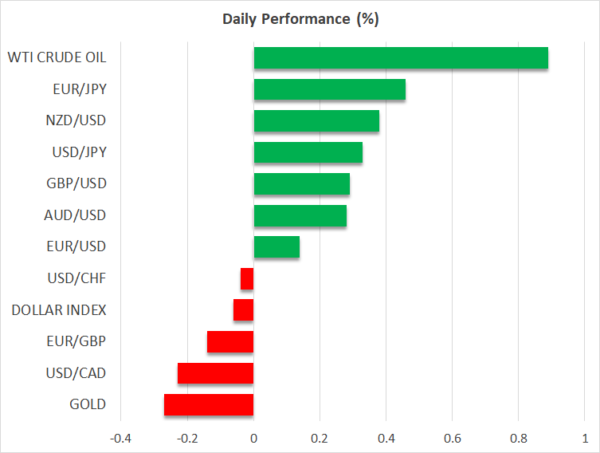 Investors forgot about the mayhem in supply chains and energy markets on Thursday and instead increased their exposure to riskier plays, as a combination of encouraging US economic data and corporate earnings from the big banks cheered up the mood.

Initial jobless claims in America fell to a post-pandemic low, painting a brighter picture for the labor market recovery, while a weaker-than-expected acceleration in factory gate prices calmed some inflation fears. Meanwhile, bank executives suggest consumers are spending without concern again, confirming that demand is ample in the economy.

Of course, the real issue is that businesses have hit a supply wall and can’t cover all this demand, which threatens to kneecap growth next year while inflation remains hot thanks to rising production costs with energy prices going through the roof.

But that’s a worry for another day. For now, investors are happy to take a glass-half-full approach and deploy more capital towards riskier assets, enjoying the small victories like the promising earnings season. The S&P 500 and Nasdaq Composite both advanced by 1.7%, coming one step closer to reclaiming their record highs.

In the FX spectrum, the commodity-linked currencies came back to life as the risk tone improved, also capitalizing on some signs that China is trying to stabilize its real estate market. The nation’s central bank loosened mortgage rules to encourage more lending and cushion the Evergrande fallout.

It’s not all good news, however, as China’s coal prices continue their relentless rise, threatening to exacerbate the power rationing that has forced some factories to halt production. Economic growth data for Q3 will hit the markets early on Monday and will be closely watched as investors try to gauge how much damage the world’s growth engine has sustained from the energy calamity and a slowing property sector.

Meanwhile, the Japanese yen remains the ‘sick man’ of the FX arena. The spike in global yields ignited the yen’s downfall and the latest improvement in risk appetite only added fuel to the slide. Between worsening rate differentials, a diminished role as a safe haven, and Japan’s reliance on imported energy, this is a dreadful environment for the yen.

Oil prices keep ripping higher, playing catch-up with the unreal rally in other energy commodities and the wider shift in market sentiment. WTI crude touched another seven-year high today as demand continues to outstrip supply after OPEC decided not to throw the market a life jacket.

This has naturally been a blessing for the oil-sensitive Canadian dollar, with investors also betting that the Bank of Canada will begin its rate hike cycle even earlier thanks to intensifying inflationary forces. The first rate increase is now fully priced in for June according to money markets.

Finally, the US dollar has drawn the short straw this week, giving back some of its recent gains as Treasury yields calmed down and traders rotated back into riskier currencies. The market is now leaning towards the scenario of an earlier but shallower rate hike cycle by the Fed, and today’s retail sales could be crucial for this narrative.

Overall, the dollar remains unique in that it enjoys both favorable growth prospects and offers protection against global risks, with the American economy’s energy independence compounding the reserve currency status.