The global economy is fighting a battle on multiple fronts. From paralyzed supply chains to an energy crisis that threatens Europe and Asia to a painful deleveraging in the Chinese real estate sector, there is a clear risk that growth slows down but inflation stays hot. This could spell some more trouble for stock markets as corporate profit margins get squeezed, while the winner might be the US dollar, which is shielded from the power crunch thanks to America’s energy independence.

Stories about supply chains in chaos have been around since the pandemic started, but the market didn’t care much. The assumption was that lockdowns were to blame, so this problem would sort itself out as companies adapted to the new environment. It didn’t.

Transportation costs have gone absolutely crazy. The price of shipping containers has risen exponentially as many ports have been operating at reduced capacity. When fewer containers are loaded on ships, international trade slows down and the price of those containers soars as companies compete to get their products shipped on time. 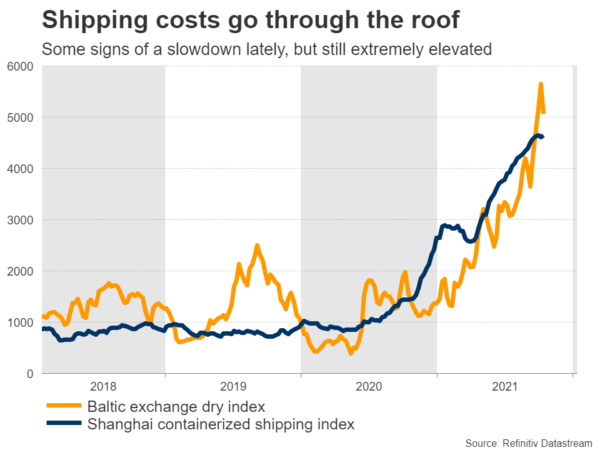 Beyond the ports, this issue has spilled over into the mainland thanks to a shortage of truck drivers. Even if ships can unload their cargo on time, those goods are often stuck as there isn’t enough manpower to transport them to warehouses quickly, many of which are packed full already. It’s a logistical mess at every step of the supply chain, overloaded with a massive backlog of shipments and labor shortages.

Enter the energy crisis. Natural gas and coal prices have gone through the stratosphere in Europe and China, threatening to hammer economic growth as consumers are faced with higher electricity and heating bills, while companies struggle with rising production costs.

How did we end up in this mess? There’s a long list of reasons, from chronic underinvestment in fossil fuels, to stricter emissions regulations, to transportation bottlenecks and depleted inventories, and even the wind not blowing enough this year to power wind farms. In Europe, many blame Russia for not releasing more natural gas to ease the shortage, whereas in China, a ban on coal imports from Australia last year certainly didn’t help. 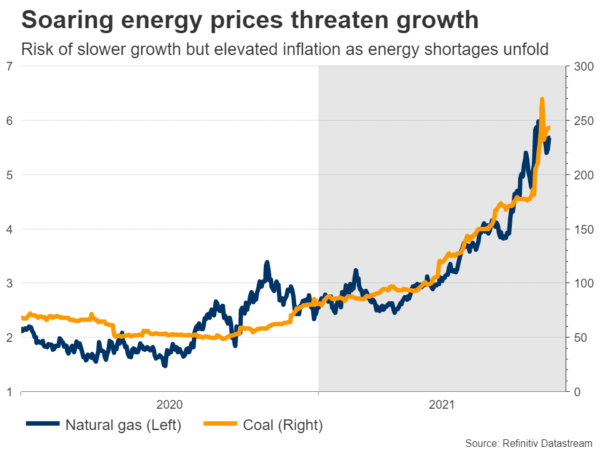 Funnily enough, the winner from all this is Vladimir Putin, who now gets to decide whether Europe will freeze during the winter. Fortunately, he has already promised to release more natural gas to help the situation. The question is what will he demand back for this assistance.

The only major economy that could escape with minor injuries is America, thanks to its self-sufficiency on energy. It will still feel some pain from spillover effects, but the damage will likely be much greater in Europe and Asia.

Everyone has heard of Evergrande, China’s overleveraged property developer that is headed for bankruptcy. Markets initially panicked about the risk of a domino effect of serial defaults that infected the nation’s banking system. But once it became clear the government would ringfence the company to avoid any spillovers, investors moved on. 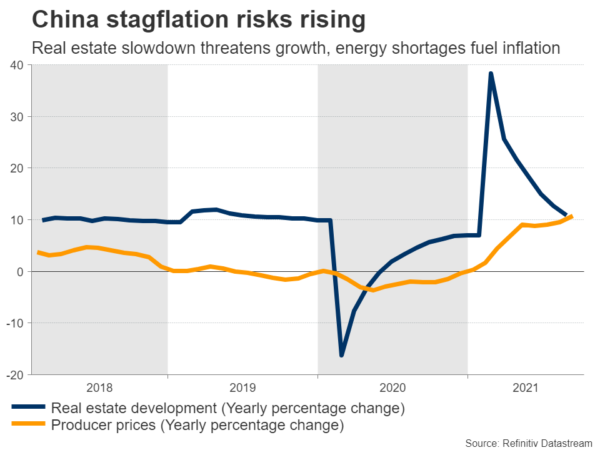 While there is still risk of a credit event as more property developers have missed debt payments lately, Chinese authorities will likely keep any fallout isolated. Instead, the real risk is what happens to the real estate market. This sector is huge at nearly 30% of GDP and it relied on debt-fueled growth for several years. Now that the government has tightened leverage rules for real estate developers, that recipe is dead.

In other words, China’s property sector will likely experience a massive hangover as growth slows and companies clean up their balance sheets. This could impact demand for metals and other building-related commodities, for which China is the biggest global consumer. 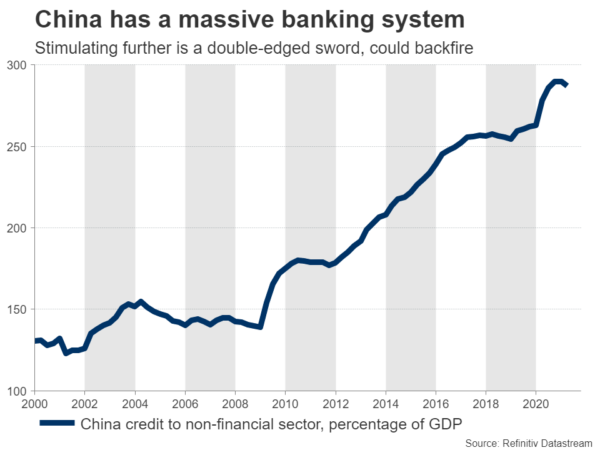 And with one of the main growth engines stalling, this could slow the overall economy. In the past, Chinese authorities resorted to powerful stimulus to revive growth, but they can’t really play that card again as the banking sector is absolutely massive already. Encouraging even more lending could backfire by making the whole system more vulnerable to future shocks.

So what does all this mean for global markets? Let’s start with stocks. We seem to be entering a period of slower economic growth but elevated inflation. Persistent supply disruptions coupled with skyrocketing energy prices is a really toxic combination.

It implies that companies are unable to cover demand, which chokes growth, but their costs are rising at the same time. This ultimately squeezes profit margins. It also hurts consumers who absorb some of these higher costs and energy bills, taking a bite out of real incomes. 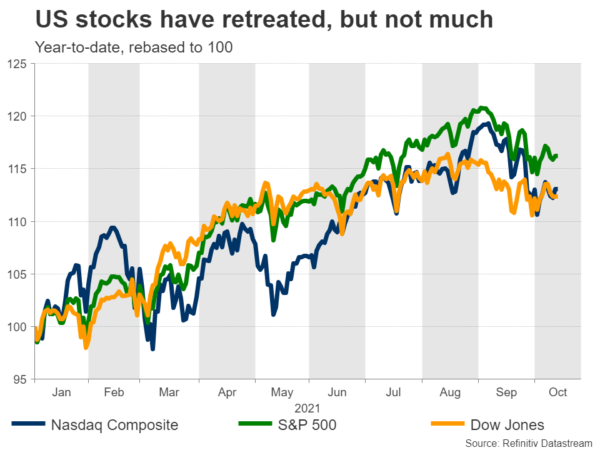 With China also slowing down and the prospect of higher corporate and capital gains taxes in America, it seems like a recipe for a correction. Stocks have been struggling for weeks now, but with the S&P 500 just 3.5% away from its record highs, there’s probably scope for a deeper retracement.

In the forex arena, the winner might be the US dollar. The American economy is shielded from the energy crisis and more spending is coming from Congress to juice up growth. This ultimately allows the Fed to raise interest rates to fight inflation, a luxury neither the European Central Bank nor the Bank of Japan can afford given their fragile economies.

In an environment of slowing growth in Europe and Asia, the dollar offers both brighter economic prospects and protection against bad outcomes given its reserve currency status.

On the other hand, the euro, the yen, and the Australian dollar are most at risk. For the euro, it’s pretty obvious why. The euro area is caught in the eye of the energy hurricane, which threatens to undermine an already-weak recovery.

Meanwhile, the Australian dollar is heavily exposed to China. For decades, Australia’s economic model has been exporting raw materials to China, so if Chinese growth slows as the property sector rebalances, so will the demand for Australian exports.

As for the yen, it boils down to interest rate differentials. If inflation remains elevated globally, that argues for foreign bond yields to climb even higher. However, the Bank of Japan essentially keeps a ceiling on Japanese yields, so they cannot really participate in any global rally, making the yen less attractive. Japan’s heavy reliance on energy imports is another risk.

Having said everything, this isn’t a catastrophe either. Growth might slow but that’s unlikely to lead to another recession. Supply chains will ultimately correct, even if it takes a while longer. We are essentially facing a period of a few months or even a year where supply and energy problems keep markets guessing.

In fact, there are some upside risks too. For instance, a big stimulus push in China could allay some concerns about a global slowdown, even if it amplifies longer-term financial stability risks. Markets usually focus on the short term.

Even better, once there are signs that supply chains are finally improving or that enough energy production is coming back online to cool prices, a powerful relief rally could follow in every asset that got beaten up. The world isn’t ending, but there could be some more turbulence ahead.