Houston, We Have An Inflation Problem

The release of the U.K. September CPI revealed a slight lull in what has nonetheless been a growing inflation problem for U.K. policymakers. Headline inflation eased to 3.1% year-over-year (still above the upper end of the central bank’s inflation target range), while core CPI inflation slowed to 2.9% and services inflation slowed to 2.6%. The slowdown, however, was in part due to base effects stemming from restaurant & cafe inflation, which made a smaller contribution to overall price inflation. Restaurant & cafe prices rose in September 2020 as the U.K. government ended its “Eat Out to Help Out” program, a price increase that was not repeated in September 2021. However, the lull of inflation will likely be brief. The recent rise in energy prices, specifically stemming from higher natural gas prices, should be reflected in October, while underlying wage growth appears to be firming. CPI inflation still appears on track to peak at or above the Bank of England’s (BoE) forecast of around 4%. 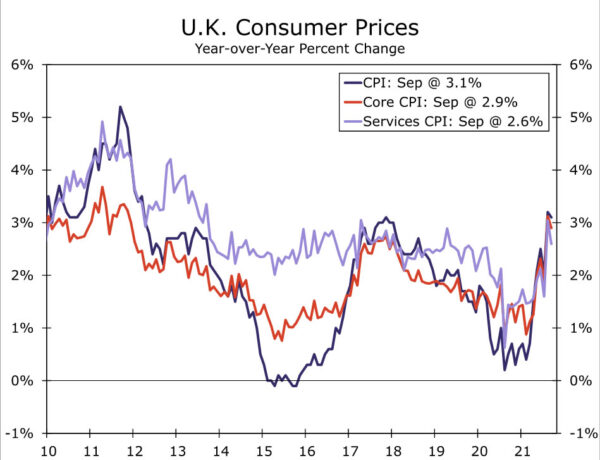 While inflation still appears to be on a fairly clear upswing, the pace of economic growth appears to be moderating. The latest news on that front was August GDP data which showed a GDP increase of 0.4% month-over-month, a bit less than expected, while July GDP was revised to show a slight decline from the previously reported slight increase. For August, services activity rose 0.3%, only half as much as expected, while industrial output rose 0.8%. September GDP growth seems likely to be similarly subdued given recent energy dispruptions, while a recent renewed rise in COVID cases also adds a complication to the outlook. 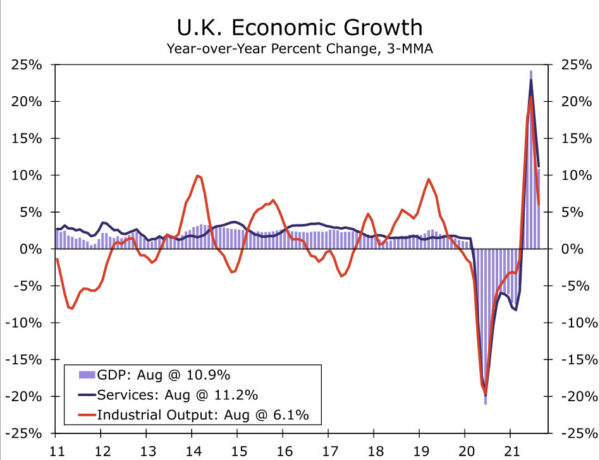 While U.K. growth and inflation trends don’t by themselves offer and open-and-shut case for an imminent rate hike, they also come in the context of increasingly hawkish recent comments from Bank of England policymakers. Most notably, governor Bailey recently said “rising energy prices mean will last longer and it will of course get into the annual numbers for longer as a consequence.” He added that:

“That raises for central banks the fear and concern of embedded expectations. That’s why we, at the Bank of England have signaled, and this is another signal, that we will have to act.”

That points to an underlying inclination from the Bank of England to start raising interest rates soon, and today’s CPI reading was very likely high enough for the central bank to proceed. Between now and the November 4 monetary policy announcement the only U.K. data of any real consequence are September retail sales and the October PMI surveys, neither of which we believe will dissuade policymakers from tightening. As a result, and in part because the initial rate hike should be modest, we now expect the Bank of England to raise its policy rate by 15 bps at its November announcement. If the BoE was instead looking to deliver a more typical 25 bps increase, we believe it might hold off on an initial rate hike for up to a few more months.

Indeed, looking beyond November we expect a relatively gradual pace of rate increases. We believe economic growth could remain somewhat choppy which could limit the speed at which policymakers move, while CPI inflation should also ease back gradually as 2022 progress. Following the initial November hike, we expect another 25 bps increase in May 2022 and a further 25 bps in November 2022, meaning we see the Bank of England’s policy rate ending next year at 0.75%—a bit less than currently priced into interest rate markets. As a result the pound could face some downside for now, and there may also be some mild downside risk to our forecast of GBP/USD appreciation over the medium-term. 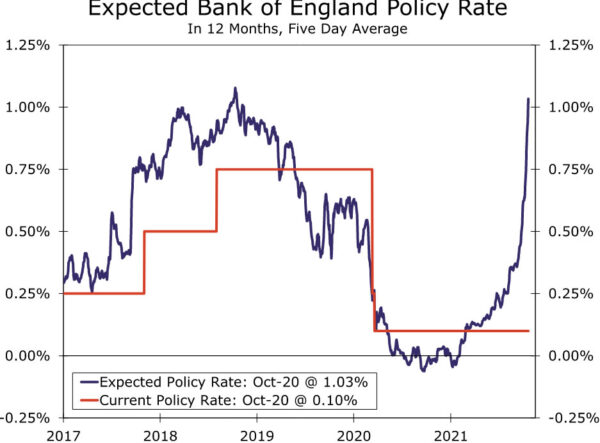