Another Challenging Quarter for Japan’s Economy

Japan’s third quarter GDP figures confirmed another challenging quarter for the country’s economy, as ongoing COVID-related restrictions in Tokyo and the surrounding areas restrained consumer and investment spending. Overall GDP fell 0.8% quarter-over-quarter (not annualized), more than reversing the unexpected 0.4% gain seen in Q2. The softness in third quarter GDP was relatively broad-based, as private consumption fell 1.1% and business capital spending fell a larger 3.8%. While not fully complete, the income details from the report were however mildly encouraging, as (nominal) employee compensation rose 0.5% quarter-over-quarter and 1.8% year-over-year. 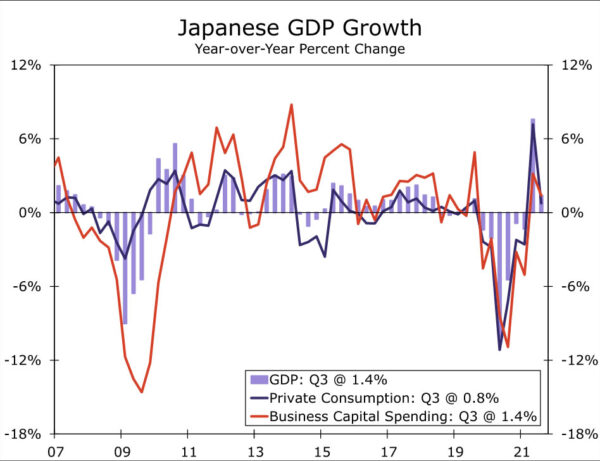 The more encouraging news with respect to Japan’s economic outlook stems from recent political and policy developments. Significantly, the Japanese government lifted the state of emergency and all associated restrictions at the end of September, paving the way for an increase in consumer and service sector activity during Q4. While this is not yet evident in the ‘hard’ activity data, there has been a perceptible improvement in confidence surveys so far during the fourth quarter. The October economy watchers survey rose to 55.5, the strongest reading since early 2014, while October consumer confidence also rose to 39.2. 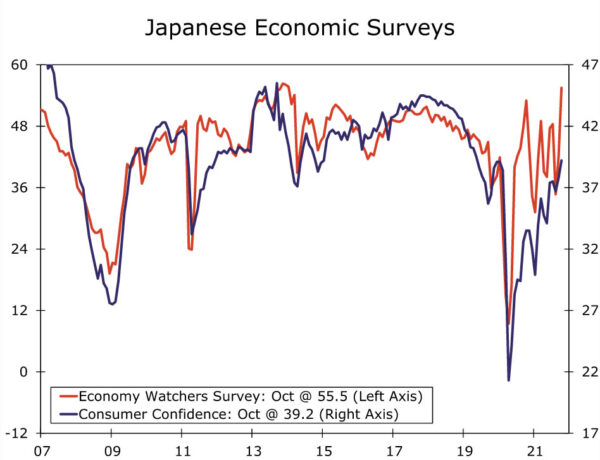 Other recent political and policy developments have also, in our view, led to some brightening in prospects for Japan’s economy. In recent months, Fumio Kishida was installed as Japan’s new Prime Minister, and his Liberal Democratic Party (LDP) subsequently won lower-house elections held at the end of October, securing 261 seats in the 465 seat lower house. Following the election, Kishida repeated his previously signaled plans for a new stimulus package, which among other things could include cash handouts and vouchers. Kishida has said the package will be put together in November, with the intention of passing by the end of the year. While the size of any additional stimulus has yet to be determined, a recent survey of economists suggested measures in the region of ¥30 trillion, which would be equivalent to more than 5% of Japan’s GDP. Even if actual new spending is less than the size of the headline package, which is usually the case, the proposed fiscal stimulus could still offer significant support to the economy in 2022 in particular. It is against this backdrop that we have in recent months moderately raised our GDP growth forecast for Japan, and we now look for 2.3% growth for 2021 and 2.8% growth for 2022. The risks around that growth outlook are potentially to the downside for 2021, but to the upside for 2022.

Although the prospects for Japan’s economy have improved moderately, our view remains for Japanese currency underperformance over time, and we expect the yen to weaken versus the greenback over the medium-term. Unlike many other economies, inflation pressures remain notably absent in Japan. For both 2022 and 2023, we forecast CPI inflation of just 0.6%, and expect the Bank of Japan to persist with its accommodative monetary policy stance for an extended period, including maintaining its 10-year Japanese government bond yield target at zero percent. 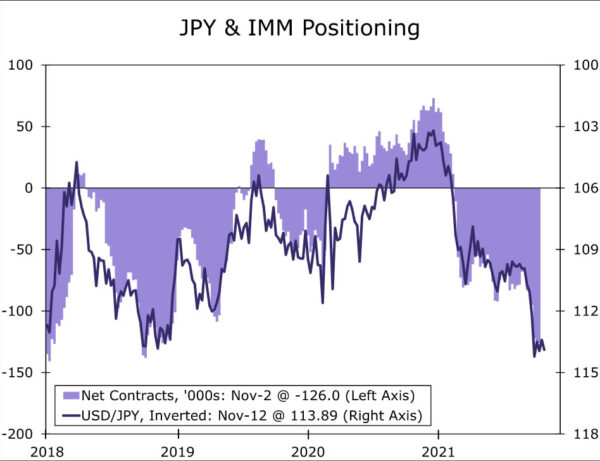 For the time being, a brief period of yen stability is possible, given some recent declines in global bond yields and existing FX positions. IMM currency futures, for example, show speculative yen short positions near their largest levels since 2019, potentially limiting yen softness for now. However, we do expect global bond yields to show a renewed rise in the months and quarters ahead as inflation pressures persist. U.S. price pressures in particular remain quite robust, with the U.S. October CPI rising 6.2% year-over-year. As U.S. inflation remains quite elevated by historical standards and the Federal Reserve winds down its quantitative easing program by mid-2022 and starts its rate hike cycle before then end of next year, we see U.S. 10-year Treasury yields rising to 2.20% by early 2023. With Japanese yields unlikely to follow U.S. yields perceptibly higher, we expect that will translate into a weaker yen versus the U.S. dollar, and target and USD/JPY exchange rate of JPY120.00 by early 2023. 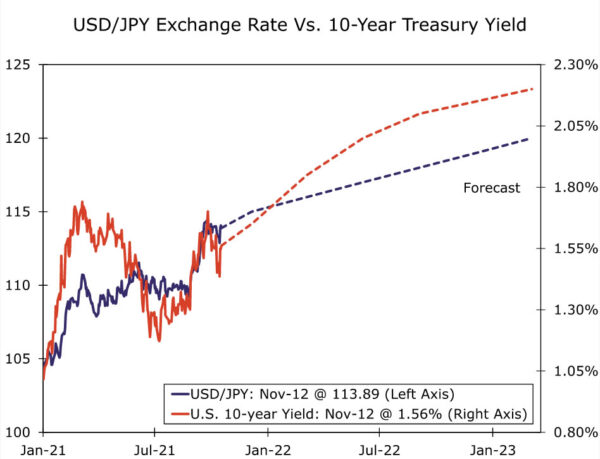