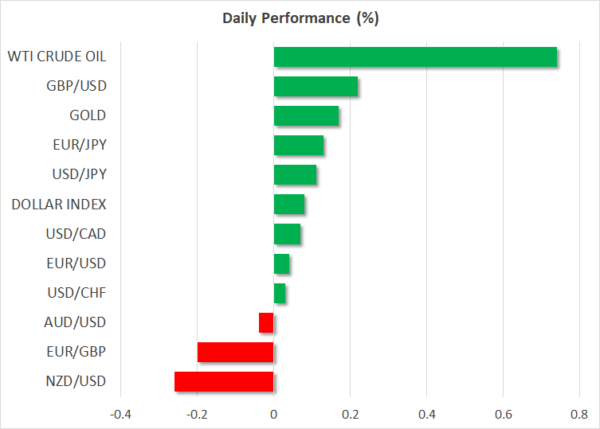 It’s still all about inflation

Uncertainty about the persistence of higher inflation continues to dog investor sentiment amid ongoing speculation about the timing of interest rate hikes by the world’s major central banks. A stronger-than-expected jump in the New York Fed’s manufacturing gauge on Monday was the latest data point to highlight long-lasting supply disruptions and rising costs, giving Treasury yields a nudge up.

The 10-year Treasury yield climbed back above 1.60% to the highest in three weeks, helping the US dollar to stretch its latest winning streak.

However, the breach of the 1.60% level proved somewhat painful for stocks on Wall Street, cutting short the rebound from last week’s dip. The S&P 500 ended the session flat and e-mini futures were marginally lower at the start of European trading.

Equity markets look a bit adrift on Tuesday but there should be some direction later from the latest retail sales numbers out of the United States. Retailers will also be in focus on the earnings front as Walmart and Home Depot are due to report their Q3 results before the US market open.

Overall, the mood is slightly risk-on, helped by easing tensions between Washington and Beijing. The much anticipated virtual meeting between President Biden and Xi Jinping ended late on Monday without much to show for other than the pledge for more cooperation.

However, hopes for reduced hostilities and better trade ties were enough to lift the Chinese yuan to 5½-month highs against the dollar.

Nevertheless, stocks are struggling to maintain the recent strong upward momentum and they may not be able to do so until there is more clarity on the monetary policy front. Although the Fed has so far given no indication that it is anywhere close to considering a faster pace of tapering, it has kept the door open to the possibility.

Several Fed policymakers will be making appearances today, including Richmond Fed President Barkin, San Francisco Fed chief Daly, and the Atlanta Fed’s Bostic. Their remarks will be closely watched for any fresh takes on the inflation outlook.

The Fed has a good record of letting the markets know in advance of any forthcoming shifts in policy so the risks for an immediate change are low. However, there is the added uncertainty about Jerome Powell’s future as Chair of the Fed as President Biden has yet to renominate him. An announcement is thought to be imminent. Should Biden instead decide to promote Governor Brainard who’s a strong contender and considered to be slightly more dovish than Powell, there could be a bit of a pullback in both yields and the dollar.

The policy paths of the Bank of England, European Central Bank and the Reserve Bank of Australia are also in the spotlight, spurring some volatility in the currency markets.

The euro took a fresh dive on Monday, slumping to a 16-month low of $1.1354, after President Lagarde reiterated that a rate hike in 2022 was “very unlikely”, warning that it could hurt the Eurozone recovery.

The Australian dollar also came under pressure earlier today, easing to around $0.7340, after RBA Governor Philip Lowe told investors that “the latest data and forecasts do not warrant an increase in the cash rate in 2022”. With no sign of a substantial pickup in wages – a key criteria for the RBA, a rate increase should be seen as some way off. However, markets are still not convinced and expect policy tightening to begin next year, hence, why the aussie slipped only marginally.

The Bank of England on the other hand is once again talking up rate hike expectations, with Governor Bailey telling lawmakers yesterday that he was “very uneasy” about the inflation situation. His comments confirm that December is very much a live meeting and the odds for a hike have moved up to more than 60%.

The pound is surging on the back of Bailey’s remarks and is today’s best performer, rising by 0.3% against the greenback and 0.4% versus the euro. 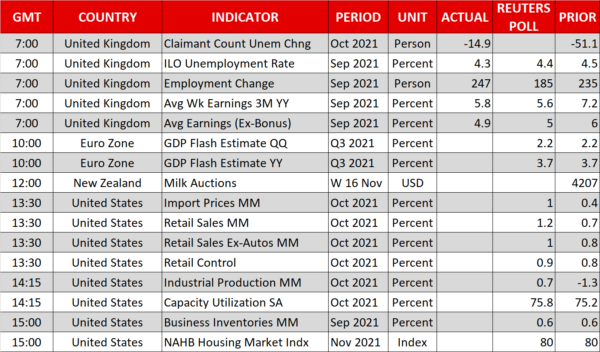