Today’s very hot inflation numbers from the UK reaffirms expectations that the Bank of England will hike interest rates in December. After leaving policy unchanged in a move that surprised the markets last time, we have now seen more evidence to justify a small rate rise and the start of a hiking cycle with the latest inflation, wages and employment data all rising more than expected.

Following the publication of the UK inflation data this morning, the pound responded in the way you would expect – rising across the board. The key question is whether it will hold onto those gains. While I am not so sure it would be able to against the US dollar, owing to an improving US economy and where inflation is even hotter than in the UK, sterling is likely to remain supported against her weaker rivals i.e. currencies where the central bank is likely to remain more dovish or less hawkish than the BoE. Among others, these include the euro, yen and franc.

Indeed, the EUR/GBP today slipped to its lowest level since early 2020, as expectations over a growing UK-Eurozone rate differential caused UK yields to perform comparatively better than German yields. This comes as the UK Consumer Prices Index (CPI) rose by 4.2% in the year to October, on the back of rising petrol and household energy costs. This was much higher than 3.9% expected and marks a sharp increase from 3.1% the month before. Bank of England Governor Andrew Bailey has already warned inflation could climb as high as 5% but judging by today’s print it could rise even higher. Other measures of inflation were also stronger:

As mentioned, the EUR/GBP broke to a fresh yearly low, although it did bounce off its lows. Still, the path of least resistance remains to the downside. I wouldn’t be surprised to see a return to the lows from 2019 and 2020 around the 0.8275-85 area in the days ahead. This is also where the 161.8% Fibonacci extension of the most recent up move come into play (see the daily chart). 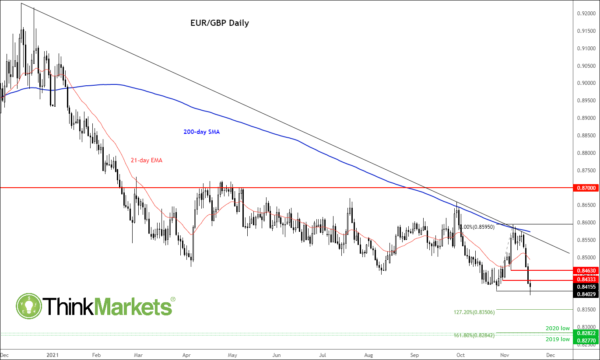 With the BoE likely to hike rates, the ECB is far from doing so. The single currency may be hurt further if fears materialise that Germany and other Eurozone nations introduce fresh lockdown measures for unvaccinated people amid rapidly rising coronavirus infections in the region. This should keep the EUR/GBP fundamentally undermined.