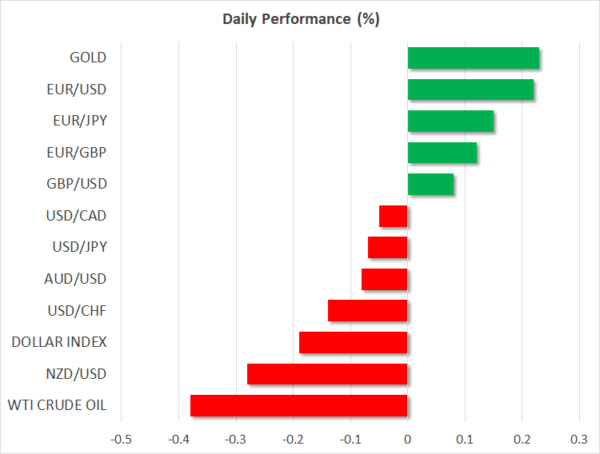 The dollar continues to bulldoze its way through the currency complex, tearing down everything in its path as the prospect of faster Fed tapering gets baked into the bond market cake. A flurry of data releases yesterday reaffirmed the strength of the American economy, but the real hero was the labor market, where the number of people seeking unemployment benefits for the first time hit a five-decade low.

With the jobs market looking healthier, more Fed officials have started to throw their weight behind the idea of accelerating the tapering process. San Francisco Fed chief Mary Daly highlighted the merits of doing so yesterday. Daly usually leans on the side of caution, so this is a crucial signal as it may reflect the consensus within the Committee.

It looks like this will get done in December. The minutes of the latest FOMC meeting showed “some” participants already supported a quicker pace of reductions in asset purchases, and inflation has only fired up further since then.

The greenback hit new cycle highs against the euro, yen, and sterling yesterday as the prospect of faster tapering propelled shorter-dated US Treasury yields higher. But longer-dated yields fell as traders priced out some inflation risk. If the Fed tightens earlier and more forcefully, that would likely snuff out inflation.

It is natural to see the yen getting blasted in an environment of rising yields. The Bank of Japan keeps a ceiling on domestic yields, so when foreign yields rise, interest rate differentials automatically widen against the yen.

The euro has also sustained heavy injuries. Germany could go into a lockdown at any moment and growth prospects for the entire Eurozone seem bleak with fresh social restrictions across the continent, energy costs squeezing consumers, and China’s slowdown threatening demand for exports.

Wall Street closed a volatile session higher on Wednesday, on its final full trading day before the long weekend. While the spike in shorter-term yields served as fuel for the dollar, what matters most for stock markets is how longer-dated yields perform.

Hence, the pullback in longer-dated yields gave equity traders the green light to load up on tech and growth stocks again. US markets will remain closed today for the Thanksgiving holiday and will close early tomorrow.

With American traders out of the picture until Monday essentially, liquidity will probably be in short supply. This means there could be sharp moves without much news behind them, and if there is any news, the market reaction may be even larger than usual.

Finally, there’s a litany of ECB speakers on the agenda for today. A speech by Bank of England Governor Bailey at 17:30 GMT will also be crucial ahead of the central bank’s December meeting, where markets are pricing in 50-50 chances of a rate increase.