In a week shortened by the Thanksgiving holiday, the U.S. economic calendar was packed. Let’s kick things off with the BEA’s second estimate for third quarter GDP. Economic growth was revised up one tenth of a percentage point to 2.1% annualized. This represents a slowing of economic activity from 6.3% and 6.7% in Q1 and Q2 respectively. The marginal revision reflected a small upgrade to consumer spending that was partially offset by a downward revision to business investment. Given the strength of consumer spending in October (discussed below), we expect a rebound in fourth quarter GDP more in line with the numbers reported for Q1 and Q2.

Up next is October’s personal income and spending. The data showed that personal income rose by 0.5% month-on-month (m/m), with the gain primarily reflecting an increase in compensation of employees (up 0.8%) and income receipts on assets (up 0.9%). These were partly offset by a decline in current transfer receipts (down 0.5%). Unfortunately, inflation ate away those nominal gains. Real personal disposable income fell by 0.3% in October, an improvement from the 1.6% decline posted in September.

Nominal personal spending rose by 1.3% m/m in October (up 0.7% in real terms). Goods spending accelerated to 2.2% (from 0.9% in September) and spending on services rose by 0.9% (up from 0.5% in September). Spending on durable goods continued to exceed its pre-pandemic share with consumers spending about 13% of their total expenditures on durables – up from an average of 10% in 2019.

The personal consumption expenditure (PCE) price deflator rose by 0.6% m/m in October. Year-over-year (y/y) it was up 5.0%, 1.2 percentage points below the CPI inflation rate (Chart 1). Excluding food and energy, core PCE inflation rose 0.4% m/m and accelerated to 4.1% y/y (from 3.7%) – like its CPI counterpart, hitting a fresh 30-year high. The core PCE deflator has been running ahead of the Fed’s long-term 2% target since April of this year. 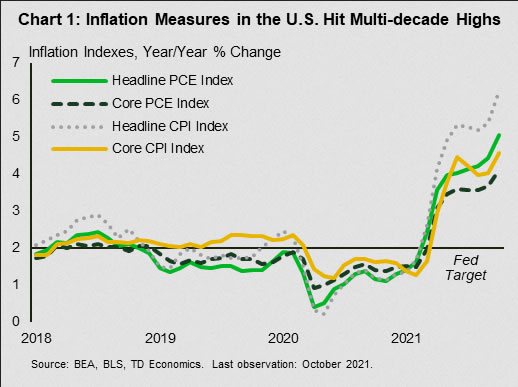 With spending outpacing income, the personal saving rate dropped to 7.3% in October from an upwardly revised 8.2% in September (Chart 2). The figure now stands below the pre-pandemic average of 7.5%, as consumers drawdown excess savings amassed during the pandemic to compensate for months of restricted economic activity. 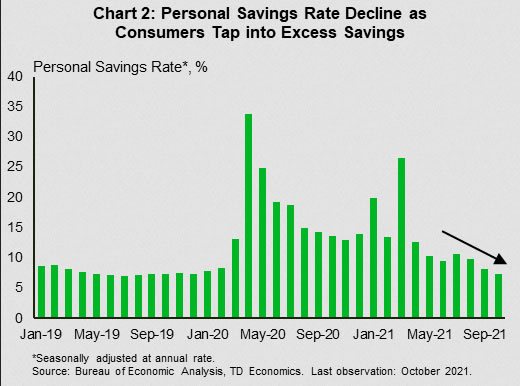 To wrap things up we turn to activities at the Fed. President Biden announced that he will nominate Jerome Powell to retain his seat at the head of the central bank, with Lael Brainard joining him as Vice-Chair. The announcement ends months of speculation and signals continuity in U.S. monetary policy amid public concerns about inflation.

The central bank also released minutes of its November meeting. The minutes showed continued concerns about widespread price pressures. Chair Powell noted that inflation came in higher than expected and supply bottlenecks were more persistent than initially thought. ‘Uncertainty’ and ‘flexibility’ were key themes. With the potential for a new more contagious COVID-19 variant emerging, the Fed has positioned itself to respond quickly should the realized path of economic activity diverge from expectations.

This week was an eventful one. Out west, communities in B.C. are slowly beginning to dig out from the powerful rainstorm that hit the province last week. Unfortunately, recovery efforts could be hampered by incoming storms. Flood warnings have been issued through much of the province and may lead to further highway closures and damage farmlands still reeling from the first storm. The economic impact of the floods will be dictated by how long the bout of severe weather lasts, as well as the time it takes to restore damaged infrastructure. November is looking like it will be a challenging month for the province. Hopefully, the recovery from it will be swift.

On the data front, key releases this week suggested labour market conditions tightened in September. The Survey of Employment, Payrolls and Hours reported a fourth consecutive monthly increase in employment of 91k positions. In addition, job vacancies surged, rising to above one million openings during the month (Chart 1). While these data highlight growing labour shortages in industries like accommodation and food services, it also points to rising wages and robust employment gains in the coming months. Indeed, employers may be forced to increase pay to address inadequate staffing levels. 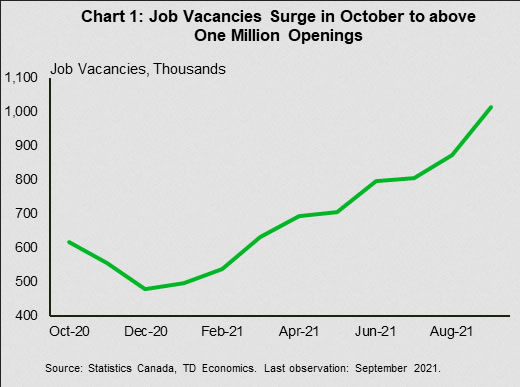 Regrettably, this vibrancy in the labour market is unlikely to be matched by third quarter GDP, which will be released next week. Supply chain constraints and plummeting agriculture production hit economic activity hard during the quarter, even as a strong rebound in services consumption fueled employment growth. We expect growth will come in a little over 3% (annualized) for the third quarter, more than two percentage points below the Bank of Canada’s forecast in the October Monetary Policy Report (Chart 2). 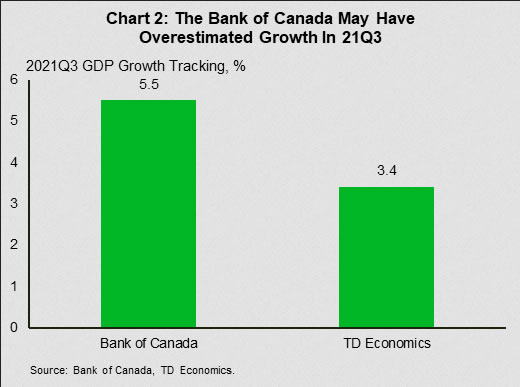 This is likely to pose a communication challenge for the Bank. With inflation top of mind, the Bank brought forward its expectation for when economic slack will be absorbed to the middle of 2022 (from the second half of the year previously). With GDP underperforming, this could push the timeline back to the latter part of the year, requiring a reversal in their guidance for the eventual tightening of policy. If the Bank wants to maintain this date it will either have to downgrade potential growth (again) or lift its expectations for growth over the first half of 2022.

However, there are COVID-related clouds forming. Scientists sounded the alarm this week about a new strain of COVID-19, likely to be named Nu, that featured an “unusual constellation of mutations” that could render vaccines less effective and the virus more transmissible. In fact, this version of the virus is already overtaking other variants in South Africa. There is much that’s not known about Nu. But if it is deemed to be a nastier variant than Delta, it would certainly be the most important downside risk to Canada’s economic outlook.