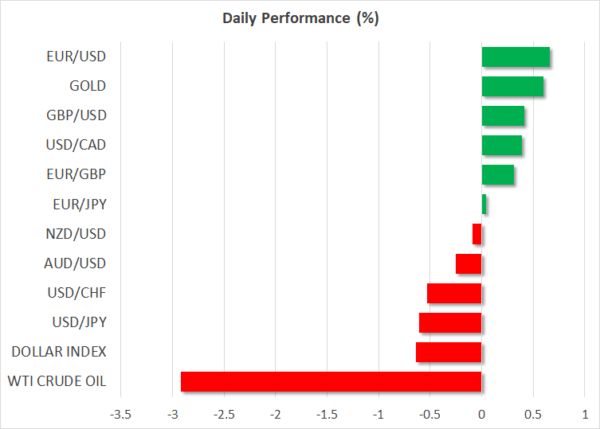 The chief executive of Moderna struck fear into financial markets on Tuesday after he warned that existing vaccines probably won’t be very effective against the new Omicron variant. His comments shouldn’t have been very surprising considering that the entire scientific community has been saying this for days now, but nervous traders still took the opportunity to liquidate riskier bets.

Wall Street futures have fallen back to virtually erase Monday’s rebound, while oil prices and commodity-linked currencies briefly dropped to new post-Omicron lows. Across the risk spectrum, Treasury yields edged lower as investors fled to the safety of US bonds. Admittedly, this tension might run deeper than Omicron itself.

Markets seem to be grappling with the risk that new restrictions will be on the table for years to come despite the vaccines, as mutations are inevitable. The twist is that central banks can’t ride to the rescue this time because inflation is sizzling hot, and there isn’t much political appetite left for gargantuan spending packages.

Ultimately this storm shall pass too but in the meantime, there’s a battle raging between market participants looking to buy any dip and funds trying to protect the profits they’ve already earned heading into year end. Shares of tech darlings have been the place to hide so far, highlighting the ‘defensive’ nature of these stocks when lockdowns are high on the radar.

Risk aversion has rippled through the FX arena too. With expectations for rate hikes by central banks being dialed back and traders piling into the safety of bonds, yield differentials have been compressed again, breathing life back into the Japanese yen and Swiss franc.

Euro/dollar has also bounced back with some force, which likely boils down to US yields falling faster than European ones and retreating energy prices relieving one headache for the euro area economy.

That said, the Eurozone was struggling with growth risks even before a new variant entered the equation, so it is difficult to envision the pair’s rebound being sustained. And if the selloff in equity markets intensifies further, the dollar could simply decouple from US yields and charge higher as safe-haven flows overpower rate differentials.

The show will continue today with the latest inflation data out of the Eurozone. Senior ECB officials have gone out on a limb lately to say this will be the ‘peak’ for inflation, but with German producer prices soaring by 18% in yearly terms, that theory will be tested soon.

The main event of the day will be a dual testimony by Fed Chair Powell and Treasury Secretary Yellen before the Senate at 15:00 GMT. Prepared remarks from Powell have already been released, with the Fed chief saying the Omicron variant poses “increased uncertainty” on inflation but downside risks to employment and growth.

That’s another way of saying the Fed can’t really do much to fight another covid wave when inflation is already so hot and new restrictions threaten to make matters worse by keeping supply chains under stress. The immediate question is whether Omicron is enough to shelve plans for a faster taper of asset purchases, but the real question is whether it could push back rate increases altogether. 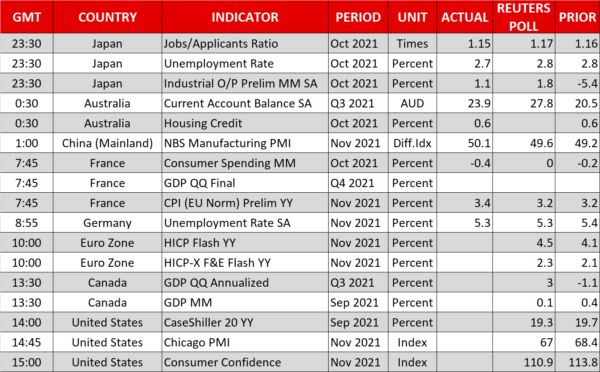