The FOMC’s final meeting of 2021, to conclude on December 15, will leave plenty to talk about at this year’s holiday parties. The highest inflation in a generation shows few if any signs of slowing in the near term. Along with the rapidly tightening labor market, the persistence of inflation pressures has committee members rethinking where policy needs to be positioned to balance the current risks to the outlook.

Despite initially announcing plans to taper asset purchases just five weeks ago, we expect the FOMC to start reducing its asset purchases at a faster pace at its meeting next week. Specifically, we look for the FOMC to reduce Treasury and mortgage-backed securities purchases at a pace of $15 billion and $7.5 billion per month, respectively, which would lead to purchases wrapping up in April 2022 instead of June 2022, which is when it would have been reached under the current pace.

FOMC members have taken pains to convey that the wind-down of asset purchases is not directly linked to the fed funds rate, and that ending asset purchases sooner is partly intended to give the FOMC greater optionality in the year ahead. That said, we expect a more hawkish tilt from the FOMC’s Summary of Economic Projections. It would not surprise us to see the “dot plot” indicate at least two 25-bp rate hikes in 2022, followed by an additional three hikes in both 2023 and 2024. That would put the median estimate for the fed funds target range at the end of 2024 at 2.00%-2.25%. Although below the FOMC’s longer-term estimated rate of 2.50%, that is above current market pricing and could feel to some at the party that the punchbowl is being removed.

The Groundwork Is Laid for a Faster Taper, but Omicron Deals a Wildcard

At the conclusion of the FOMC’s November 3 meeting, the committee announced it would begin reducing its pace of asset purchases. More specifically, the committee announced it would reduce the $80 billion monthly rate of Treasury purchases by $10 billion per month in both November and December, while reducing the initial $40 billion monthly pace of mortgage-backed securities (MBS) buying by $5 billion per month over the same period. If tapering were to continue at that pace, asset purchases would conclude in June 2022. However, the FOMC did not indicate how much it would scale back purchases beyond December, giving itself the flexibility to make adjustments “if warranted by changes in the economic outlook.”

Since November 3, there have been a few notable data developments as well as changes in how key Fed officials view the outlook. First, inflation has continued to surprise to the upside. The consumer price index rose a scorching 0.9% in October, pushing the one-year change up to a 30-year high of 6.2%. Core PCE inflation at 4.1% is now more than twice the FOMC’s target (Figures 1 & 2). The November CPI report, to be released this Friday, will give an additional look at inflation developments. We expect another uncomfortable print for the Fed, with a 0.8% monthly rise pushing prices up to a year-over-year rate just shy of 7%. 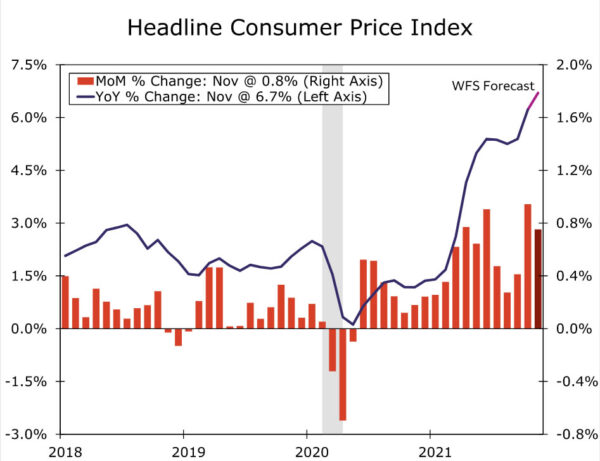 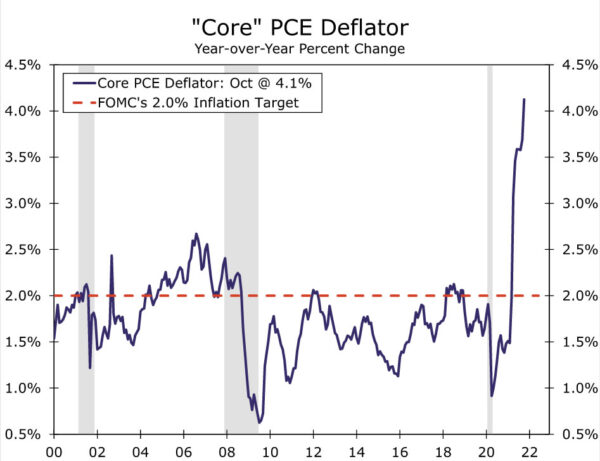 But beyond any one month’s data, FOMC members have indicated that the strongest inflation in a generation is likely to take longer to subside than previously thought. In Chair Powell’s prepared remarks to Congress last week, he stated that “it now appears that factors pushing inflation upward will linger well into next year,” and that it was time to retire using “transitory” to describe the current bout of above-target inflation.

The labor market has also made meaningful strides toward full employment over the inter-meeting period. Although November payrolls underwhelmed, a solid gain in October and upward revisions to prior months’ data show 1.1 million more employees on the books since the FOMC’s most recent meeting concluded. What’s more, the unemployment rate has declined rapidly, falling 0.6 points, even as labor force participation has risen to a new COVID-era high (Figures 3 & 4). While there is still room for the jobs picture to improve, the clearly tighter labor market reduces the tension between the FOMC’s price stability and employment goals. 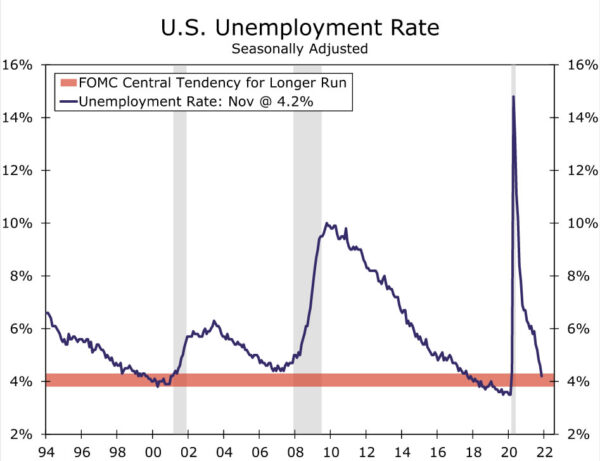 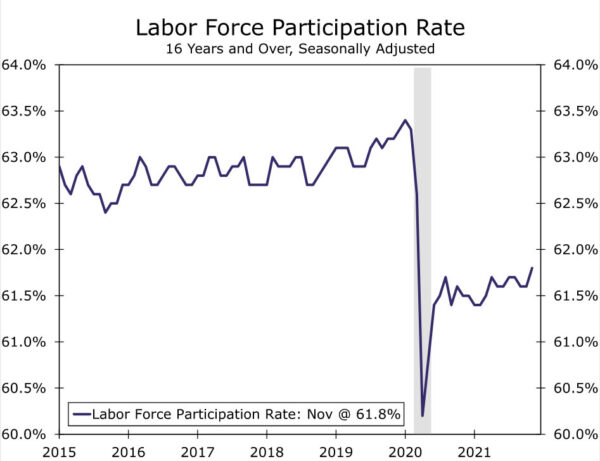 The recent inflation and labor market developments have led to a chorus of FOMC members flagging the possibility of reducing asset purchases more quickly. The laundry list of officials includes more hawkish members, such as Waller (Board), Bostic (Atlanta), Bullard (St. Louis) and Mester (Cleveland), but also more dovish members, Clarida (Board) and Daly (San Francisco). Even Chair Powell recently highlighted the potential for a faster pace of tapering at the FOMC’s upcoming meeting. Notably, his comments came after the emergence of the Omicron variant become known. We believe that if Powell viewed Omicron as a significant threat to the outlook at that time, he would have refrained from saying that it would be appropriate to discuss wrapping up purchases a few months earlier at the December meeting.

Our working assumption therefore is that the FOMC will announce plans to speed up the tapering of its asset purchases at its meeting next week. Specifically, we expect the committee to announce that for January, it will purchase $45 billion of Treasuries and $22.5 billion of MBS, i.e., reducing Treasury and MBS monthly purchases by $15 billion and $7.5 billion, respectively. At that pace, asset purchases would wrap in April rather than June. However, if information in the coming days points to the Omicron variant becoming a bigger threat to the economic outlook and/or November’s CPI report paints a significantly more benign picture of inflation, then we could envision the FOMC punting any adjustments until its January 26 meeting. In other words, an accelerated taper is not a sure-fire bet.

The Dots Will Rise, but How Much?

Next week’s FOMC meeting will include the first update to the Summary of Economic Projections (SEP) since the September 21-22 FOMC meeting. As we have already discussed, much has changed in the economic outlook since then, and all eyes will be on the dot plot, as financial market participants try to discern the outlook for fed funds rate hikes once the taper is complete. In the September projections, the median dot for the end of 2022 sat squarely between zero and one 25-bp rate hike (Figure 5). This was largely in line with market pricing at the time. However, over the past few months, market pricing for 2022 rate hikes has increased sharply. As of this writing, markets are priced for approximately 66 bps of tightening in 2022. Our best guess is the updated dots to be released next week will have a median projection of two 25-bp rate hikes in 2022.

Past 2022, we doubt the median dot will change all that much, although the distribution of participant submissions might. The September projections showed a median of three rate hikes in 2023 and three more in 2024. If the median dot moves to two hikes in 2022 and the 2023/2024 dots continue to indicate three hikes each year, the cumulative number of hikes would put the fed funds target range at 2.00%-2.25% at the end of 2024. Perhaps one more rate hike sneaks in somewhere over that horizon, but any more than that and the median dot would be at or above the “longer-run” dot of 2.5%. We doubt most FOMC participants want to signal that short-term rates may rise above the neutral rate this far out.

Other than the dots, the second-most important SEP projection will be the FOMC’s inflation outlook. As it has done at the past few meetings, the FOMC will need to mark to market its 2021 inflation projections. The FOMC’s September median core PCE inflation forecast for Q4-2021 was 3.7%, a number that is already below October’s reading of 4.1%. More interesting, in our view, will be the 2022 projections. The FOMC’s median core PCE inflation projection for Q4-2022 was 2.2% in September. Our current forecast is for 2.9% (Figure 6). We doubt the updated median projection will be as high as our forecast, but something in the 2.4%-2.7% range seems plausible to us. Revisions to the projections for real GDP growth and the unemployment rate should be more modest and probably will not garner as much attention as changes to the dots and inflation outlook. 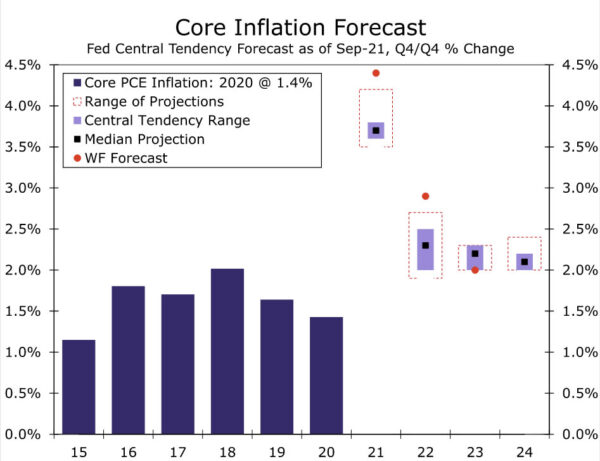 Even the Fed Has Plenty of Job Openings to Fill

Shortly before Thanksgiving, President Biden announced his intention to nominate Jerome Powell for another term as Chair of the Board of Governors. President Biden also announced that he would nominate current Governor Lael Brainard to be the Vice Chair. The timing of their confirmation votes has not yet been announced, but we suspect they will be confirmed sometime in the first few weeks of January. Assuming they are both confirmed, and Richard Clarida, whose term expires at the end of January, is not appointed for another Board term, there will be three vacant seats on the seven member Board of Governors. One of these three vacant seats would be the Vice Chair of Supervision, whose duties include leading the Federal Reserve’s financial system regulatory initiatives. Media reports suggest President Biden will put forth candidates for at least a couple of these seats in the coming weeks, but thus far, no one has been officially named. We doubt any of these potential candidates would materially change our outlook for monetary policy, but as the situation evolves, we will update our readers accordingly.