Fed Meeting: Faster Taper Looms But What Will The Dot Plot Reveal?

The Federal Reserve will conclude its final meeting of the year on Wednesday, announcing its decision at 19:00 GMT. Chair Jerome Powell has already dropped some hints as to what to expect after his hawkish pivot last week when he testified before Congress. Most FOMC members seem to be on board with accelerating the pace at which bond purchases are tapered given the relentless rise in inflation. The question is, will they be equally as hawkish when it comes to raising interest rates, or has the Omicron variant upset the rosy outlook for the US economy? Ahead of the meeting, dollar bulls are feeling reinvigorated.

A booming economy, with high inflation to show for it

Throughout the pandemic, the American economy has been the most impervious to the numerous Covid waves that have come and gone. GDP has expanded in every quarter since emerging from the collapse in output induced by the shutdowns of the first wave and now exceeds its pre-pandemic peak. But more importantly, the labour market is getting closer to a full recovery, worker and component shortages are worsening, and commodity prices remain too high, all of which mean inflationary pressures won’t be abating anytime soon.

The US consumer price index hit 6.8 in November – a 39-year high. Judging from their latest remarks, inflation appears to have crossed the threshold that is within policymakers’ comfort zone. Up until recently, Powell and most of his colleagues were willing to remain patient on the inflation front to give more time for the labour market to heal. But the jobs data has been steadily improving, and besides that, all the evidence suggests that the surge in inflation won’t be temporary.

It was a game-changing moment when Powell and his predecessor, Janet Yellen, both admitted in their hearing before lawmakers last week that it may be time to retire the word ‘transitory’. This climbdown has paved the way for the Fed to speed up the winding down of its emergency asset purchases – something the more hawkish FOMC members had been strongly calling for prior to Powell’s change in tone.

Policymakers will probably opt to double the pace of tapering from $15 billion a month to $30 billion, ending the program in mid-March instead of in mid-June as per November’s decision. But markets had been sensing this shift coming from the Fed and there was no tantrum to Powell’s signal.

Will Omicron spur some caution?

However, it’s possible that following the discovery of the Omicron variant, should the Fed still go ahead with faster tapering, the market response might not be so tamed. Yet, investors do not seem particularly worried about the Omicron variant and even less concerned that US growth would suffer because of it. Nonetheless, there are still far too many unknowns about this latest mutation. Moreover, the growth outlook in some of America’s trading partners has dimmed lately. Hence, a too aggressive rate hike path might just spook the markets.

It’s all about the dot plot

The Fed publishes its quarterly economic projections in December and so the updated dot plot will likely be the centre of investors’ attention. Back in September, policymakers had pencilled in even odds for one rate increase in 2022 and three in 2023. Money markets are currently pricing in three hikes in 2022. If the new dot plot becomes more closely aligned with fed funds futures, it might deal a reality check for Wall Street where stocks continue to prove to have the remarkable ability to always bounce back from negative headlines. 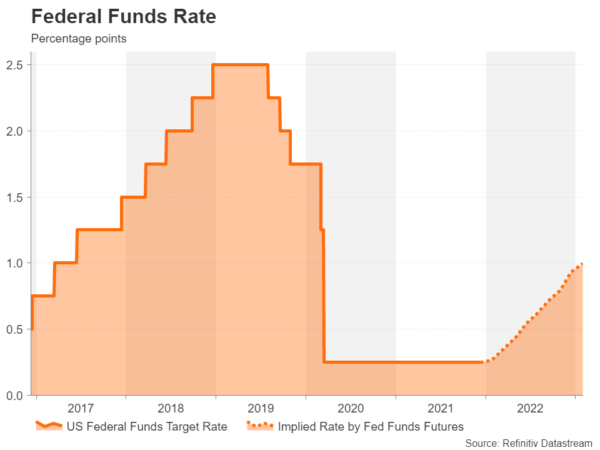 But what about in the currency markets? The US dollar has been caught between rising short-dated Treasury yields and downward trending long-term ones. If the dot plot cements expectations of at least two rate rises in 2022, starting soon after QE has ended, yields could post some fresh gains, bolstering the dollar. Currencies like the euro are the most vulnerable to a boost in the greenback, especially if the European Central Bank, also due to meet this week, is contrastingly dovish.

Dollar may pull back in absence of hawkish surprises Euro/dollar is currently fluctuating around the $1.1290 mark, which is the 61.8% Fibonacci retracement of the March 2020 – January 2021 uptrend. A hawkish FOMC outcome could pull the pair back down to November’s 17-month low of $1.1184. A drop below this trough would clear the path towards the $1.10 level – the 78.6% Fibonacci.

However, should the Fed disappoint the hawkish expectations, the euro could climb towards its 50-day moving average, which lies slightly beneath the 50% Fibonacci of $1.1492.

Nevertheless, although there is a risk that the Omicron outbreak will spur some caution, the Fed will probably want to get an early start on rate hikes and traders should brace themselves for some volatility in the coming days.