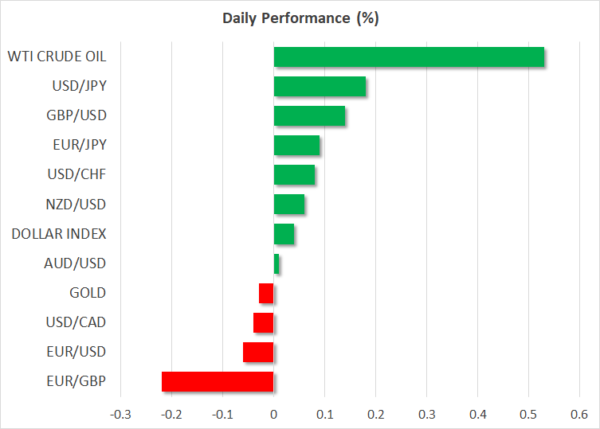 After a dismal start to the week, financial markets are back in a cheerful mood. All it took to turn the tide was some encouraging news around public health and promises of more stimulus spending.

Risk appetite returned with a vengeance after reports that US regulators are about to authorize the covid treatment pills from Pfizer and Merck, while President Biden sweetened the pie by pledging to “get something done” on his Build Back Better bill.

With the prospect of effective treatments negating the Omicron outbreak and newfound hopes that the multi-trillion spending deal may ultimately get pushed through Congress, market participants got the green light to load up on riskier assets again.

The relief rally was felt across every asset class. US equities came back swinging to erase all their losses for the week and trade even higher, with the energy sector leading the charge thanks to a similar comeback in oil prices.

Treasury yields edged higher as well, helping the US dollar to stabilize. But the spike in yields inflicted some damage on the Japanese yen, which tends to underperform in an environment where foreign yields are rising due to the Bank of Japan’s yield curve control strategy.

Gold suffered the same fate. The yellow metal has been a peculiar case this year, unable to capitalize on its reputation as an inflation hedge and instead trading almost entirely as a mirror reflection of real yields. This is an ominous sign because if bullion couldn’t shine with real yields floored at record low levels, it could be in real trouble next year when the Fed stops asset purchases and those yields start to creep up.

Excluding the swings in the yen, the FX market has been uncharacteristically quiet lately. Most major pairs remain confined in relatively narrow trading ranges, with the minor moves that do occur merely reflecting the shifts in risk sentiment.

Euro/dollar for instance has been trapped within a range of 140 pips this entire month despite the Fed taking markets by storm with signals for three rate increases next year, uncertainty around fiscal spending, and lockdowns in Europe.

Hence, the FX complex remains a prisoner to risk appetite and it may take some big piece of news to break it out. Seismic news is unlikely over the next few days as everything winds down for the holidays, but equally, if anything does hit the markets it could have an oversized impact because of poor liquidity conditions.

There isn’t much on the agenda for today, so the spotlight will remain on the usual suspects – Omicron and the risk of new restrictions in Europe, as well as any updates on Biden’s spending ambitions.