Action Forex
HomeContributorsFundamental AnalysisDXY: What is Going on with the Dollar?

DXY: What is Going on with the Dollar?

Inflation is a hot topic and will likely dominate the agenda for most of the year. Yet despite rising to 7.0%, the highest print since the 80s, the CPI measure of inflation failed to have the sort of impact you would expect from the dollar. The greenback fell across the board on Wednesday, before extending its declines in the first half of today’s session, as the PPI measure of inflation also had not impact.

Coming hot on the heels of that 7% rise in consumer inflation, today we found out that producer prices also remained very high. The PPI measure of inflation was stronger-than-expected on the core front (8.3% y/y vs. 8.0% eyed), but slightly weaker on the headline front (9.7% y/y vs. 9.8% expected). The slight weakness on the headline PPI number was due to the 6% drop in the index for gasoline. However, with WTI climbing above $82, this component of the PPI is likely to have risen back.

So, price pressures show no signs of abating, and with the Fed turning even more hawkish, why isn’t the dollar rising?

While there are a few good reasons behind the dollar’s performance, as I will discuss below, the greenback is unlikely to remain in protracted bear trend for too long. I reckon it could recover sooner rather than later.

Foreign investors are likely to be reducing their equity holdings in the US, possibly favouring Europe, where the markets are likely to remain supported on the back of the ECB’s ongoing support and the potential for a strong economic recovery. Buying stocks in Europe means there is demand for euros, pounds and francs etc.

Additionally, there is a real risk that high levels of inflation could hurt consumer demand, which could weigh on economic activity, especially with omicron spreading like wildfires. This is tun may mean the Fed will slow down or pause its hiking later this year.

Still, the above consideration may only have limited impact on the dollar. I wouldn’t bet against the greenback making a comeback, especially with many major currency pairs having reached key technical levels, with the EUR/USD being a spitting distance away from the 1.15 handle.

The dollar index itself has reached the upper end of THIS critical zone between 94.50 to 94.65: 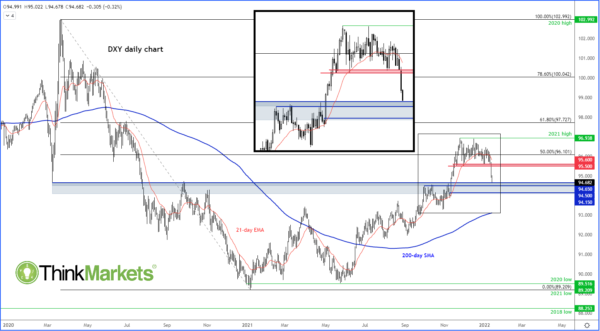 As the chart shows, this area was previously resistance and the base of the last breakout. Will it now turn into a major support or demand zone? Traders should wait for signs of a bottom pattern to emerge here before potentially looking for any long dollar trades. For what it is worth, I reckon we will get at least a short-term bounce from around here.