Action Forex
HomeContributorsFundamental AnalysisCanada: Rate Hikes Close, But Not Quite Yet

After a bumpy path earlier in 2021, the Canadian economy enjoyed a solid rebound late last year. The recovery was highlighted by strong labor market trends, with seven consecutive months of job gains, including a 54,700 increase in employment for December. The unemployment rate fell almost two percentage points over the second half of last year, to 5.9%.

However, it was not just the labor market that showed sturdy trends, with retail sales, manufacturing sales, and overall GDP registering solid gains. In terms of the most recent figures, October GDP rose 0.8% month-over-month, October retail sales rose 1.6%, and manufacturing sales rose 2.6%. With respect to the overall economy, Q3 GDP grew 5.4% quarter-over-quarter annualized in Q3, and the consensus forecast is for a similar sized gain in Q4.

Still even with Canada’s rebound, it’s not clear that will lead to immediate rate hikes from the Bank of Canada (BoC). At the December monetary policy announcement, after the sizable Q3 GDP increase was already known, the central bank said:

“The Governing Council judges that in view of ongoing excess capacity, the economy continues to require considerable monetary policy support. We remain committed to holding the policy interest rate at the effective lower bound until economic slack is absorbed so that the 2 percent inflation target is sustainably achieved. In the Bank’s October projection, this happens sometime in the middle quarters of 2022.”

The Bank of Canada also point to some uncertainties surrounding the Omicron variant. From a global perspective, the central bank said the “..new Omicron COVID-19 variant has prompted a tightening of travel restrictions in many countries…and has injected renewed uncertainty”, while with respect to Canadian specific developments the BoC said the “devastating floods in British Columbia and uncertainties arising from the Omicron variant could weigh on growth by compounding supply chain disruptions and reducing demand for some services.”

Some of these concerns or uncertainties are perhaps borne out by the Bank of Canada’s latest Business Outlook Survey. Within that survey the Past Sales Balance rose to +63 in Q4, reflecting the strength seen late last year. However, the Future Sales Balance fell further to +3, highlighting the possibility of a soft patch for the economy early in 2022. We would also note that some COVID-related restrictions went back into place in Ontario in early January, including a work-from-home order, stricter limit on indoor gatherings, a shift to remote learning for schools, and closure for some businesses including gyms, theaters and restaurants. Restrictions have been imposed in some other provinces as well. 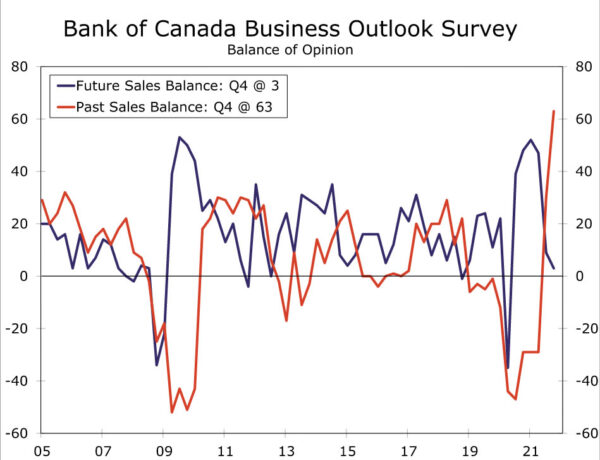 Thus even as inflation continues to move higher, with the December CPI edging up to 4.7% year-over-year and the average of the core inflation measures firming to 2.9%, we do not expect an imminent rate increase at the Bank of Canada January monetary policy announcement. Indeed, with the central bank perhaps wanting to monitor the impact (or perhaps lack of impact) from the Omicron variant in the coming months, our view remains the Bank of Canada will deliver an initial rate increase at its April monetary policy meeting, which would also be broadly consistent with the timing for which it anticipates slack within the economy will be absorbed. Our outlook for a 25 bps rate hike by April is more conservative than current market pricing, which anticipates 52 bps of rate increase during the next three months. Indeed, more broadly we forecast 75 bps of rate increase from the Bank of Canada over the next 12 months, compared to the 152 bps of rate increase anticipated by market participants. Thus even though there are some positive factors for the Canadian dollar, including a recent rise in oil prices, considering the aggressive market expectations for Bank of Canada policy, and the prospect of relatively rapid tightening (at least by international standards) from the Federal Reserve in 2022, we still expect the Canadian dollar to show renewed weakness versus the greenback as the year progresses. 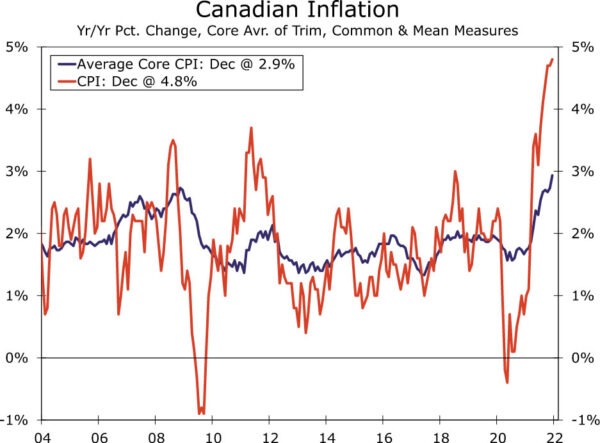 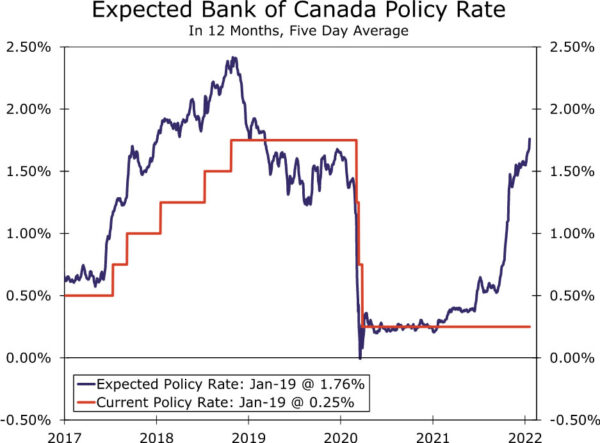