Gold price was in a super uptrend from the $1260-1265 levels against the US Dollar. The price recently traded as high as $1357, started a correction and currently trading near a major support. 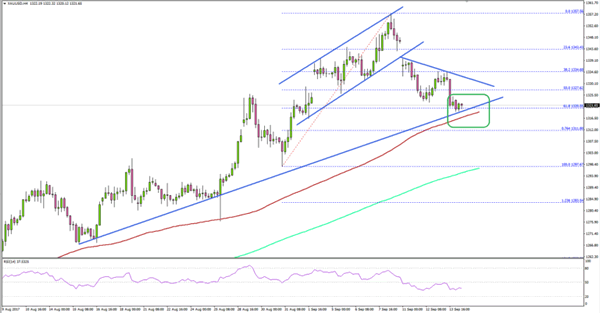 As mentioned, after trading as high as $1357.56, the price started correcting lower. It moved below the 50% Fib retracement level of the last wave from the $1297 low to $1357 high, which is a short-term bearish sign.

At the outset, the price is currently near a crucial bullish trend line with support near $1320 on the 4-hours chart. The stated $1320 support is also positioned above the 100 simple moving average (H4).

Therefore, the $1320 level holds a lot of importance for the current trend. A break and close below it could take the price back towards the next support at $1300. On the upside, there is a connecting bearish trend line at $1330, which is a short-term resistance.

Today, China saw a couple of important releases like the Retail Sales and Industrial output by the National Bureau of Statistics of China. The forecast was lined up for an increase in the Retail Sales by 10.5% in August 2017 compared with the month a year ago.

However, the actual result was on the lower side, as the Retail Sales grew 10.1%, which was also less than the last 10.4%. Similarly, the Industrial output was lined up for an increase of 6.6% in August 2017 compared with the month a year ago.

The actual was disappointing, as the increase was 6%, less than the last +6.4%. The Urban investment also posted a lower reading of +7.8%, less than the forecast of +8.2%.

Overall, Gold price might correct a few points towards $1330, but it remains at a risk of further corrections.

Oil Rallies But Gold Is Directionless