Research Russia-Ukraine: Talk is Cheap – We Expect No Immediate Breakthrough in Peace Talks But Market Focus to Shift Elsewhere

Despite the prevailing optimism, we think it will take weeks, probably months, before any peace deal between Russia and Ukraine can be achieved. The devil is in the details and many details remain open. The key questions relate to security guarantees proposed by Ukraine, its neutrality status and the destiny of Crimea and Russian-occupied territories in Eastern Ukraine.

Any peace deal is likely to be placed under a referendum in Ukraine, and in the context of rising patriotism, we do not think the Ukrainian public is ready for any substantial concessions to end the war yet. Instead, they want to win the war.

Hence, we think the war will drag on as the peace talks are protracted. However, in the absence of escalation outside Ukraine, market focus will increasingly focus on other topics: tighter financial conditions, high inflation and recession risks. 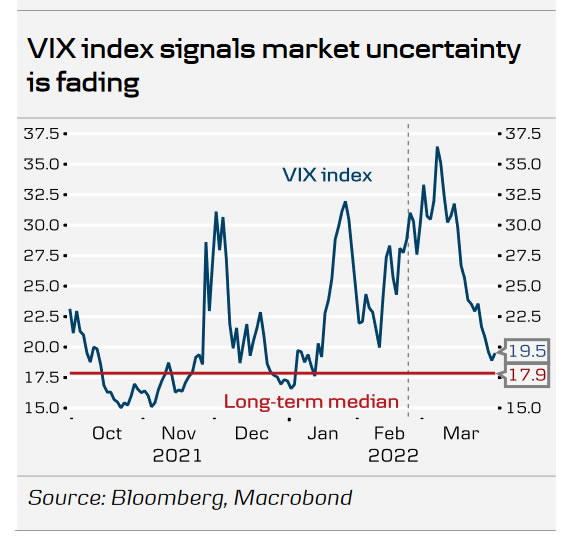 Optimism around the peace talks between Ukraine and Russia is gaining ground. The negotiating delegations met face-to-face on Tuesday 29 March for the first time in two weeks and are due to continue talks albeit that the exact date for the next round of talks has not been set yet. According to Russia, the talks have been constructive, and according to the Ukrainian aide, time could soon be ripe for the two presidents to meet. Despite the prevailing optimism, we do not expect any immediate breakthrough. Rather, it is likely to take at least weeks, probably months, before any agreement could be made.

Ukraine has said it could give up its aspirations to join NATO if it received security guarantees from third parties. While Ukraine dropping its ambitions to seek NATO membership would likely satisfy Russia, we are not convinced it is plausible for Ukraine to receive such guarantees. Ukraine could seek security guarantees from the US, the UK, China, Turkey, Israel or some of the larger European countries. Under the Ukrainian proposal, guarantor countries would have to consult each other within three days after the beginning of any military aggression or hybrid war. After consultations, the guarantor countries would have to provide Ukraine troops, weapons and protection over Ukraine’s airspace. As we have seen no evidence of third-party guarantees being prepared, and particularly as the US has not supplied troops or weapons to Ukraine and NATO has consistently rejected Ukraine’s request for a no-fly-zone, we are sceptical whether third countries would have motivations for providing such guarantees.

The current draft proposal also includes provisions for Crimea and Donbass region. Under Ukraine’s proposal, the question of Crimea would be frozen for 15 years, during which Ukraine would hold negotiations with Russia on the status of the region. The status of Russian-occupied Luhansk and Donetsk regions is proposed to be discussed in the meeting between the presidents. Media reports with regards to Ukraine’s willingness to make any territorial concessions have been mixed. In any case, we do not see how Russia could spin the results from its ‘special operation’ as a win domestically without gaining control over at least the regions in Eastern Ukraine. Hence, we see a deal without any territorial concessions unlikely or unsustainable at least.

What is worth keeping in mind is that the Ukrainian President Zelenskyi has promised a referendum on key terms and conditions of any peace deal. A referendum would only be held after Russian troops had withdrawn from Ukraine. Russia has said they will reduce their military activities in Kyiv and Chernihiv (in Northern Ukraine), but only time will tell whether Russia walks the talk or whether they are simply buying time to regroup and provide maintenance for their troops in the frontline. In the last days of March, Russia has continued heavy attacks on the Ukrainian capital Kyiv despite their official communication signalling de-escalation. Hence, we think there is a long way to go for Russian troops to start withdrawing (and definitely no evidence yet), a key precondition for a Ukrainian referendum on any peace deal terms and conditions.

Recent public opinion surveys highlight the strong patriotic sentiment in Ukraine in the context of their remarkable resistance against the Russian army in conventional warfare. According to the survey conducted by the Ukrainian Sociological Group “Rating” on 18 March, 77% of the respondents believe that things in Ukraine are moving in the right direction. Belief in victory remains high, as 93% of the respondents believe that Ukraine will be able to repel Russia’s attack. A clear majority of respondents (82%) consider the threat of the country being split unlikely, and this confidence has increased significantly during the war. To us, these opinions signal that Ukrainians, as of now, are unlikely to vote for a peace deal that would include substantial concessions to Russia.

In terms of NATO membership, more people now support NATO cooperation outside of the alliance than before the war, implying that the Ukrainian public could be in favour of dropping aspirations to join NATO. However, a slight majority (44%) still believes Ukraine should join NATO while 42% prefer cooperation with NATO without becoming a member. Support for NATO membership is stronger in the West and Centre of Ukraine, while people in the South and East prefer cooperation outside the alliance.

We continue to highlight that the terms and conditions on the negotiation table are a reflection of the actual war developments and as long as the Ukrainian resistance remains strong, Russia will struggle to achieve terms favourable enough for it to spin its ‘special operation’ a victory in the homeland. Hence, the most likely scenario is that Russian aggression will remain over the coming months, as peace talks are protracted and the current set of sanctions remaining in place. A Russian attack with chemical, biological or tactical nuclear weapons may now seem more unlikely but it remains a possibility. However, in the absence of such attacks and/or a substantial step-up in sanctions (such as an EU embargo on Russian energy), market focus is likely to increasingly shift to other topics – tightening financial conditions, high inflation and looming recession risks being the main drivers.