Inflation and retail sales figures for March are the focal point for traders in the United States next week. The consumer price index (CPI) is released on Tuesday and retail sales on Thursday, both due at 12:30 GMT. The two datasets will likely reinforce expectations that the Federal Reserve will step on the brakes hard over the coming months to cool an overheating economy. But with investors already pricing in almost nine more 25-basis-point rate increases to come in 2022, can the US dollar find much upside from the numbers?

The pressure will be on for Fed policymakers as inflation is expected to exceed 8.0% for the first time since January 1982. After hitting 7.9% in February, the annual rate of CPI is projected to have reached 8.3% in March. The core figure, which excludes food and energy prices, is forecast to have edged up from 6.4% to 6.6% year-on-year. 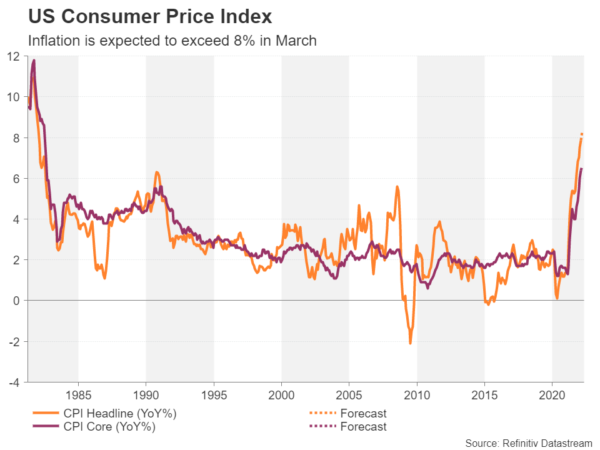 Before Russia’s invasion of Ukraine, many market participants, as well as the Fed, were hoping that inflationary pressures would begin to subside at some point in the spring. But that’s not looking very likely following the massive upsurge in energy and commodity prices that was triggered by the West’s heavy sanctions on Russian exports.

How much longer will US consumers keep spending?

Although the US is energy independent and not very reliant on other imports from Russia, there are worries that soaring consumer prices will curb household spending as wages will struggle to keep up with inflation. However, that impact has yet to be felt and consumers probably continued to spend in March.

Retail sales are expected to have risen by 0.6% month-on-month in March, accelerating from the prior 0.3% rate. A pickup in average hourly pay over the last year and excess savings from the pandemic stimulus checks are likely supporting consumption for now. But the savings ratio is already close to dropping towards the historical average and it’s only a matter of time before the wage increases start to fall even more behind the pace of inflation. So the rosy picture may not last much longer. 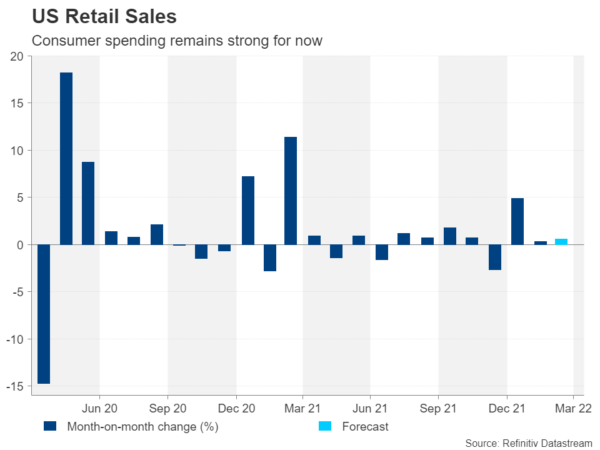 Fed on course to hike rates by 50 bps

Nevertheless, that’s not going to stop the Fed from pressing ahead with a series of rate increases this year and next week’s data will be taken as another green light by policymakers that the economy is robust enough to withstand a fast tightening in policy.

The US dollar has rallied sharply since late February on the back of the combined boost from safe-haven demand and intensifying rate hike bets. Its gains have been the strongest against the Japanese yen, which has come under intense pressure due to the Bank of Japan’s yield cap.

Can the dollar reclaim the 125-yen level?

Dollar/yen hit a 6½-year of 125.10 on March 28 and the pair could re-challenge that peak if both the inflation and retail sales reports beat expectations. The Fed holds its next rate-setting meeting on May 3-4 so these will be the last crucial releases before then for FOMC members to gauge the strength of the economy and for investors to ramp up their bets of a 50-bps rate hike.

There is a risk, however, that with markets so heavily priced for an aggressive Fed, any softness in the data might spark some profit-taking. In such a scenario, dollar/yen could slip towards the 121 level, which is the 261.8% Fibonacci extension of the January downleg.