The European Central Bank will conclude its next meeting at 11:45 GMT on Thursday, and with inflation running wild, it will likely signal that a rate increase is on the menu soon. Ending asset purchases in July followed by a rate increase in September seems like the most likely endgame. However, markets have already priced an even more aggressive tightening pace, so such signals might not be enough to rescue the battered euro.

The ECB has a crisis on its hands. Eurozone inflation is running at 7.5% per year, which is the fastest clip since the euro came into existence. And this may not be the peak. Supply chains are still a mess with the recent lockdowns in China while the invasion of Ukraine has sent commodity prices rocketing higher, so more inflation is probably in the pipeline.

The problem is that economic growth is losing steam. This means the ECB cannot raise interest rates with brute force to fight this inflationary spiral. Consumers are being forced to spend more on necessities like food and energy, which limits their ability to consume everything else. Coupled with the slowdown in China that will restrain European exports, economic data over the next few months could be ugly. 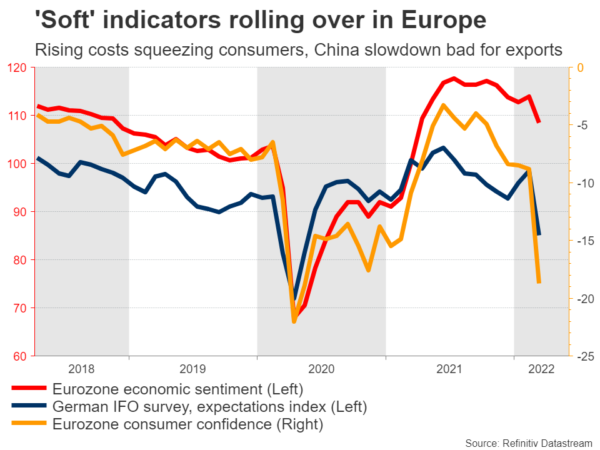 Business and consumer confidence readings have already cratered and even though governments have rolled out support measures to cushion the impact, there is still a clear risk of recession in Europe.

In this environment, the ECB is essentially trapped. It needs to tighten policy to control inflation, but if it steps on the brakes too hard, it would increase recession risks even further. That’s not a gamble the officials want to take.

Hence, the only realistic option is to raise interest rates in a very careful manner. The ECB has to strike the right balance, tightening neither too fast nor too slow. 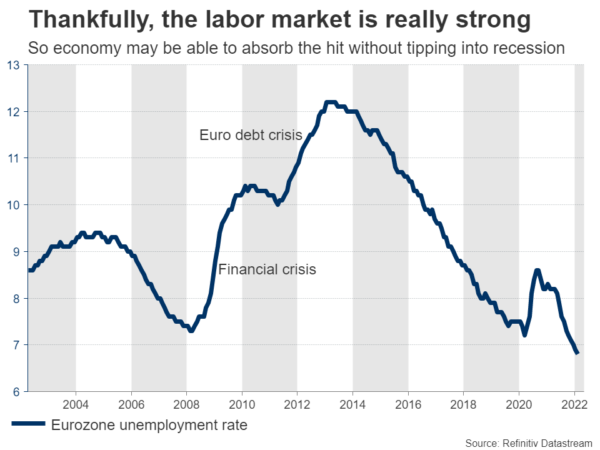 On the bright side, the labor market was very strong before the Ukraine crisis. The unemployment rate hit a record low in February, so there is some optimism that the economy can absorb the hit without falling apart.

No relief for the euro?

All told, the ECB is about to hike rates for the first time in a decade. While it won’t commit to a specific meeting this week, it is becoming clear that September is a realistic time for liftoff. Asset purchases could end in July, the earliest possible date according to the forward guidance.

But for the euro, this might not be enough to stop the bleeding. Money markets have already priced in 73 basis points of rate increases for this year, which amounts to three quarter-point hikes. The first move is fully priced for September and market pricing also implies a 60% probability for a ‘double’ hike of 50 basis points at that meeting.

This is a tall bar for the ECB to overcome. Therefore, even though the central bank is moving in a more hawkish direction, its speed might not be enough to satisfy euro traders.

Euro/dollar has been trending lower for more than a year and if the ECB only delivers ‘half measures’ this week, that’s unlikely to change. A disappointment could see the pair test the 1.0835 region again.

If the ECB wants to save the euro, it needs to signal that rates can be raised earlier, possibly over the summer. This is a low-probability outcome as it would violate its own forward guidance, but not impossible given the inflation dynamics. In this scenario, euro/dollar could shoot higher, perhaps towards the 1.1120 zone.

Of course, for the euro to stage a sustainable rally, the growth outlook needs to improve first. That’s unlikely to happen until there’s a ceasefire in Ukraine and the French presidential election is out of the way.