The US dollar moved sideways on Monday ahead of a busy week in the market. The index has been in a spectacular rally as risks in the market rise and as hopes of additional rate hikes by the Federal Reserve rise. Key data to watch this week will be the American retail sales data scheduled for Tuesday. Analysts expect these numbers to reveal that sales remained under pressure as consumer prices rise. The US will also publish the latest new home sales and housing starts numbers. The index will also react to geopolitical tensions as Finland and Sweden make their Nato application.

US futures were in the green during the Asian session, continuing the trend that started on Thursday last week. The Dow Jones, Nasdaq 100, and S&P 500 indices will react to revenue numbers from the biggest retailers in the US. These companies include Walmart, Target, Home Depot, Lowe’s, and Macy’s. Other key companies that will publish this week are Take Two Interactive, JD.com, Cisco, Analog Devices, and Deere among others. According to FactSet, most American companies have been publishing strong revenue growth and weak profits. The average earnings growth is 9.1%, which is the lowest level since Q4 of 2020.

The Chinese statistics agency published weak economic numbers earlier today. These numbers point to the fact that the economy is struggling because of ongoing lockdowns in Shanghai. During the weekend, Shanghai announced reopening plans that will include mass testing and shopping malls reopening. The economic calendar will have minimal events today, with the main one being the EU economic forecast by the European Commission. Investors will also focus more on cryptocurrencies following last week’s volatility.

The EURUSD pair was little changed on Monday morning. It is trading at 1.0406 and is hovering near the lowest level since 2002. The pair is below the important resistance level at 1.0480, where it struggled moving below in April and early this month. The pair is between the middle and the lower side of the Bollinger Bands while the William % Range and RSI have moved above their oversold levels. Therefore, with the pair forming a bearish flag pattern, there is a likelihood that it will move lower. 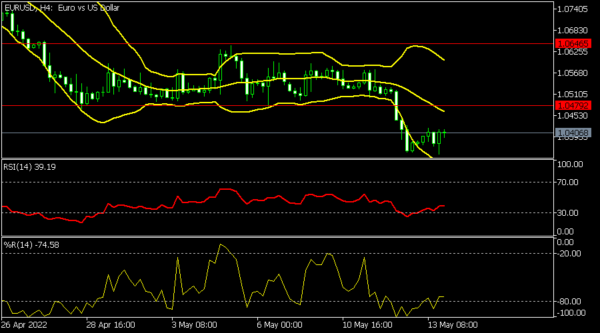 The USDCHF continued its bullish trend. The pair is trading at 1.0018, which is slightly above its parity level. It is along the upper side of the Bollinger Bands. Also, the Relative Strength Index kept moving above the overbought level while the MACD has risen above the neutral level. The pair will likely keep rising as the bullish momentum continues. 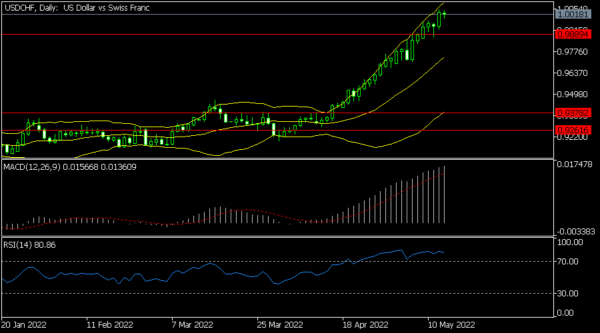 The XAUUSD pair continued falling as the gold sell-off continued. The pair is trading at 1,811, which is significantly lower than this month’s high of 1,911. It is between the middle and lower side of the Bollinger Bands while the RSI is hovering slightly above the oversold level. The path of the least resistance for gold is lower, with the next reference level being at 1,800. 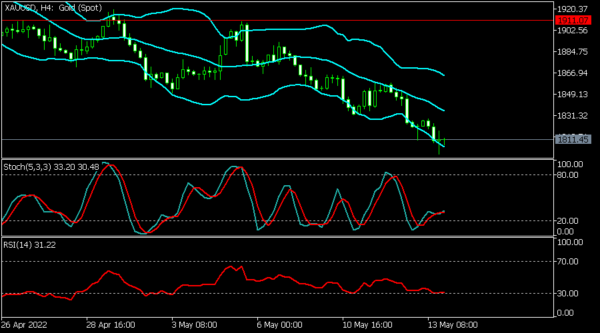