Action Forex
HomeContributorsFundamental AnalysisDollar: Brief Correction or the Beginning of a Downswing?

Dollar: Brief Correction or the Beginning of a Downswing?

The Dollar is continuing its retreat, which started precisely two weeks ago. Over this period, the Dollar Index has retreated 3.5% from the 20-year highs, losing about half of the gains from the last leg of the rally since late March.

And now the big question for investors and traders is whether we see a correction before a new wave of US currency strength or whether the highs reached were a peak for years to come, as they were in 2017 and 2020. 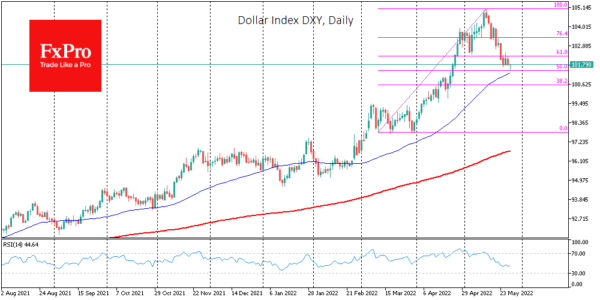 While the picture is mixed, there are more factors in favour that buying the Dollar at current levels is not good.

Many of the major central banks have verbally (Bank of England and ECB) or already actually (RBNZ, Bank of Canada) come out at the pace of the Fed’s rate hikes. Consequently, short-term bond yield spreads, which had driven the demand for the Dollar in the previous few months, are no longer driving the prices.

The latest Fed minutes have indicated a “flexible approach” – a hint of willingness to reduce the pace of rate hikes in the event of economic problems.

Before the Dollar’s retreat, there was a peak in 10-year Treasury yields, which declined from 3.2% to 2.8%. Yields have been hovering around that level for the last three days, falling back to the 50-day moving average. A pullback below this line could be the first signal of a break in the uptrend. In that case, be prepared for increased pressure on the Dollar. 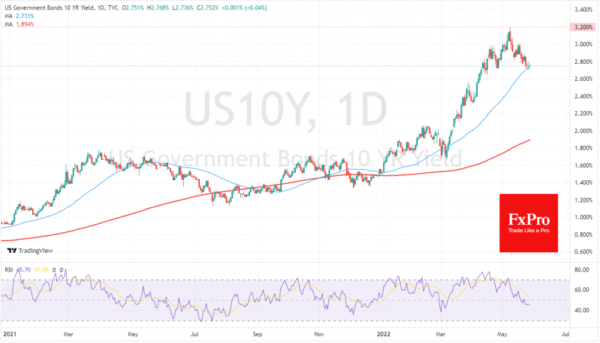 Elsewhere, there are rumours that China is cutting its more than trillion-euro investments in US Treasuries, following the Russian experience with blocking the Central Bank reserves. However, China may be reducing its holdings for another reason: capital outflows and pressure on the currency due to the economic slowdown.

The current uncertainty in the US debt market and the currency market is likely to resolve in the next few days and has a high chance of sending important signals to all markets, from FX and debt to cryptocurrency and commodities, over the coming weeks or even months.