The 75 bps rate hike by the FOMC today—the largest in 27 years—demonstrates the Committee’s growing concern over inflation as well as its increased commitment to restore price stability. The move takes the fed funds rate to a range of 1.50-1.75%, which is still below the Committee’s estimated range of neutral.

The statement and updated Summary of Economic Projections (SEP) showed the FOMC is prepared to continue to tighten policy at a historically aggressive pace. The median estimate for the fed funds rate at year-end rose to 3.375%, implying another 175 bps of tightening before the year is over.

Despite aiming to move policy into restrictive territory by year-end, the SEP continues to paint a rather optimistic picture of the economy ahead. GDP growth next year is expected to slow only slightly below trend, while inflation falls back to 2-3% and the unemployment rate rises modestly enough to where it remains within its “longer-run” neutral range. In our view, it will take a more material slowdown in economic growth to bring core inflation back to the FOMC’s 2% target and more damage is likely to be inflicted to the labor market.

Growing alarm over inflation led the Federal Open Market Committee (FOMC) to deliver its biggest rate increase in 27 years at today’s meeting. Specifically, the FOMC voted to raise the fed funds rate 75 bps, bringing the target range to 1.50-1.75%. In the post-meeting release, the Fed underscored its focus on inflation by adding the statement that “the Committee is strongly committed to returning inflation to its 2% objective.” Yet, the Fed appears to be increasingly aware that this objective will not be quick or easy. The statement removed the line that “the Committee expects inflation to return to its 2 percent objective and the labor market to remain strong”, a tacit admission that reining in inflation will likely inflict some pain on the labor market.

The historically large rate hike comes as inflation shows no signs of abating soon. Following the last FOMC meeting in early May, Chair Powell pledged to be nimble if price pressures did not ease as anticipated. Since then, both the April and May CPI reports came in hotter than expected, with “peak” inflation increasingly likely to still be ahead. At the same time inflation concerns have intensified, the labor market has remained on fire. Job growth surprised to the upside in the two employment reports since the FOMC’s last meeting, and labor demand is still exceptionally strong. However, not all Committee members were on board with such an aggressive and, up until a few days ago, unanticipated response. Kansas City Fed President Esther George, historically one of the more hawkish members of the Committee, dissented in favor of a smaller 50 bps hike.

The statement released by the Committee at today’s meeting made clear that “ongoing increases in the target range [for the federal funds rate] will be appropriate.” The median projection in the dot plot was for the federal funds rate to finish 2022 at 3.375% which would suggest 175 bps of additional tightening at the remaining four FOMC meetings of the year. This could imply the FOMC reverts back to 50 bps for most of the remaining meetings of the year or opts for another 75 bps in July and then steadily ramps the pace back down to 50 bps and then 25 bps.

For 2023, the median dot for year-end was 3.75%. It is important to bear in mind that the projections for the dot plot are for the year-end federal funds rate. Thus, it is possible some participants expect the rate to peak somewhat higher than 3.75% at some point next year before reversing course. Regardless, it is clear that the baseline expectation on the Committee is for the bulk of the rate hikes to occur in 2022. In 2024, the median projection falls slightly to 3.375%, in line with inflation that continues to gradually normalize. 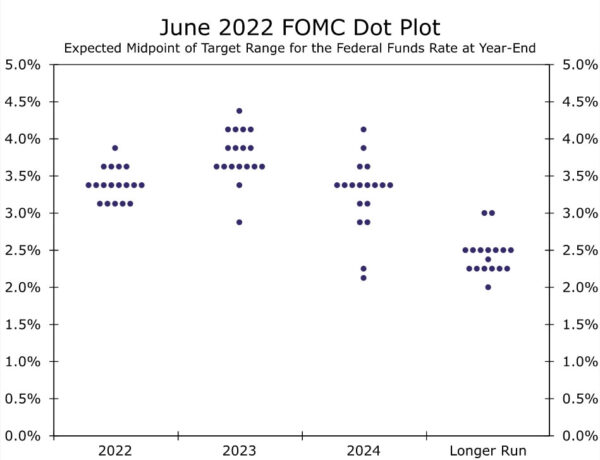 Although it did not play a major role in the statement or Chair Powell’s press conference, the Fed’s balance sheet began to decline this month and will continue to do so for the foreseeable future. The Federal Reserve will allow up to $30 billion worth of Treasury securities to roll off the central bank’s balance sheet each month from June through August. The Fed will also allow up to $17.5 billion worth of mortgage-backed securities to roll off the balance sheet per month. The FOMC’s plan is then to increase the size of the monthly caps to $60 billion and $35 billion, respectively, beginning in September, and to maintain the monthly caps at those levels for an indefinite period of time.

In the post-meeting press conference, Chair Powell made clear that the Committee does not expect 75 bps rate hikes to be “common.” That said, his comments made clear that another 75 bps rate hike could come in July depending on how the data evolve over the next six weeks. This suggests to us the July 13 CPI release for June will be critical to the Committee’s decision on the fed funds rate at the next meeting. Chair Powell once again reiterated that the Committee needs to see “compelling” evidence that inflation is rolling over before it feels comfortable taking its foot off the brake.

Starting to—But Not Fully—Fessing Up to Pain Ahead

We believe the SEP paints a more realistic but still overly optimistic picture of the bumpy road ahead for the economy as the Fed aims to restore price stability compared to the March projections. Inflation is still expected to run at an elevated rate over the next year-and-a-half, consistent with the more aggressive policy path outlined by the dot plot. The median estimate for headline PCE inflation in Q4 was revised up to 5.2% from 4.3%, while core PCE expectations were bumped up to 4.3%. While inflation is expected to recede over 2023, Committee members look for inflation to remain noticeably above target; the median estimate puts headline PCE at 2.6% in Q4:2023 and core at 2.7%, both little changed from the March projections. Notably, no Committee members expect core inflation to fall back below 2% through 2024. 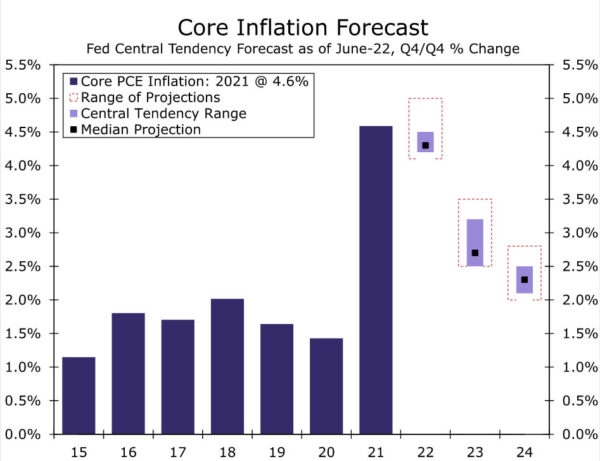 Meanwhile, officials expect the tighter policy to have only a modestly more dampening effect on economic growth. The median estimate for GDP Q4/Q4 GDP growth in 2022 was downwardly revised to 1.7% from 2.8% in the March projections. GDP forecasts for 2023 were also pared down, but at 1.7% show the FOMC expects the economy to grow closely in line with its longer-run rate of 1.8%. This slowdown in economic growth was reflected in the projections for the unemployment rate. The median forecast for the unemployment rate shows a steady rise from 3.7% at the end of this year to 3.9% at the end of 2023 and 4.1% at the end of 2024. An unemployment rate of 4.1% is not far off the Committee’s “longer-run” neutral estimate of 4.0%, and it is indicative of a very soft landing for the economy, or “masterful performance” in the words of Federal Reserve Governor Waller. That said, unemployment that is increasing by more than half a percentage point as a base case scenario highlights the potential risks of a harder landing. In our view, it will take a more material slowdown in economic growth to bring core inflation back to the FOMC’s 2% target.

Taking a step back, we believe today’s 75 bps rate hike marks an important inflection point in U.S. monetary policy. Numerous Fed officials have stated previously that monetary policy should be nimble in response to new developments and that the FOMC will do whatever it takes to reduce inflationary pressures. Prior to last Friday’s CPI report, consensus expectations were firmly anchored to a 50 bps rate hike. But after the inflation data came in hotter than expected, it appears the Committee nimbly adjusted course in real time. Ultimately, the difference between 50 and 75 bps is somewhat small, but today’s hike boosts the Fed’s credibility and demonstrates that the door is open for similar adjustments at future meetings. This suggests to us a much more sensitive reaction function from the FOMC, and similar upside inflation surprises in the future very well may be met with equally aggressive upside surprises for the federal funds rate.