The era of subzero interest rates will conclude in the eurozone next month after a decade, but what is less certain is how fast the monetary tightening phase will develop in the year ahead as recession risks build up in investors’ mind. Flash CPI inflation figures will provide some clues on Friday at 10:00 GMT, with forecasts pointing to a new record high.

The headline CPI inflation figure is expected to unlock a new record high at 8.4% y/y in June compared to 8.1% in the previous month, while the core measure, which excludes volatile food and energy prices, could see a moderate increase to 4.5% y/y from 4.4% previously. Growth in consumer prices is already quadruple the central bank’s 2.0% symmetrical target and twice as high the level when the euro currency was first launched in 1999. Therefore, policymakers have no other choice than to catch up with other major central banks and rush to raise interest rates after the regular asset purchase program (APP) ends on July 1. 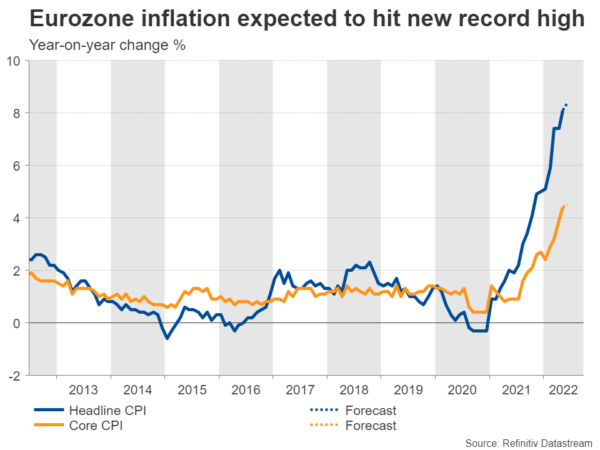 Perhaps, accumulated inventories due to retailers’ overspending to restock shelves during the pandemic period, may motivate some discounting in prices, though that may not be enough to cool inflation metrics towards the target in the near term. Hence, even though consumer confidence has plummeted to the all-time low reached in April 2020, the ECB will likely listen to market expectations and gear up its rate hike cycle by delivering two aggressive 50-bps rate increases in September and October; something Lagarde could not exclude during her latest speech in Portugal.

However, the problem that arises at this point is that eurozone member states all have a different economic background and the unavoidable path of higher borrowing costs may raise fresh sovereign risk in indebted economies such as Italy, which is the third largest economy in the bloc.

The spread between the Italian and German 10-year bond yields that is considered a measure of financial stress in the euro area, has widened to the largest since the start of the pandemic, forcing the central bank to start studies on a new bond-buying anti-fragmentation tool. Investors anticipate a compromise to be reached on July 21, though the program may require participation in the European Stability Mechanism conditionality, which some member states may not be willing to undertake. The old issue of how fiscal policy is implemented across the union might be another challenge, while the Italian national election on June 1, 2023 could also cause some delay. 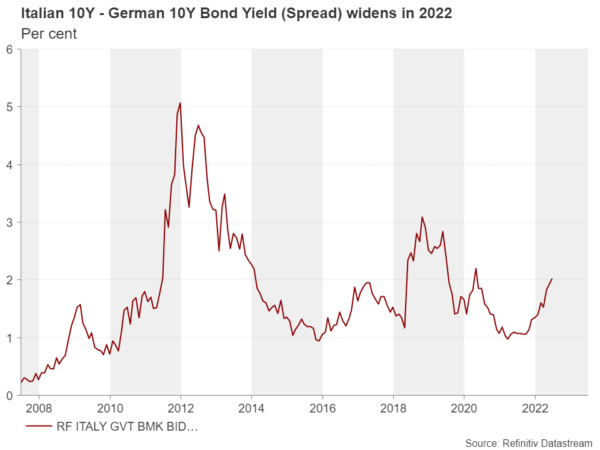 The eurozone’s uncertain economic outlook explains the short-lived upside reversals in euro/dollar and this may remain a headwind in the near term. New peaks in inflation may barely move the euro unless the data calls for even aggressive rate hikes beyond July. In this case, it would be interesting to see whether recession fears can offset any inflation-driven bullish corrections in the euro.

Technically, a step below the nearby support of 1.0480 could squeeze the price directly towards the double bottom area of 1.0352. Alternatively, a close above the descending trendline and the shorter-term simple moving averages (SMAs) seen around 1.0600 are required to bring the previous high at 1.0786 back under examination.