The EURUSD pair declined sharply as key central banks warned that the era of easy money was coming to an end. Speaking at an ECB conference in Portugal, officials said that higher interest rates were necessary to curb soaring inflation. In his statement, Jerome Powell said that the Fed has accepted higher recession risks in its policies. He argued that the Fed must do whatever it takes to stabilize prices and restore stability. The same view was shared by Christine Lagarde of the ECB and Andrew Bailey of the BOE. Analysts now expect that the ECB will hike rates by either 0.25% or 0.50% in the coming meeting.

The US dollar rose against other currencies after the US published weak economic data. According to the statistics agency, the country’s economy contracted by 1.6% in the first quarter. This decline was worse than the previous estimate of -1.5%. The bureau pointed to lower consumer spending, higher trade deficit, and low government spending for the contraction. Analysts expect that the second quarter will also contract. The currency will next react to the upcoming personal consumption expenditure data. The median estimate by a Reuters poll is that core PCE dropped from 4.9% in April to 4.8% in June.

The British pound dropped below an important support level ahead of the upcoming UK economic data. Economists expect the numbers to reveal that the country’s economy rose by 0.8% in the first quarter. Analysts believe that the rising inflation and weak consumer spending will lead to a contraction in the second quarter. Other important data will be the house price index (HPI) data by Nationwide Society. With mortgage rates surging, most analysts believe that the HPI dropped from 11.2% in May to 10.8% in June.

The GBPUSD pair retreated to a two-week low of 1.2128 after the hawkish tone by Powell and Bailey. As it dropped, it managed to move below the lower side of the descending channel shown in green. It has also fallen below the 25-day moving average, slightly above the 23.6% Fibonacci retracement level. The Relative Strength Index has moved close to the oversold level. Therefore, the pair will likely continue falling today. 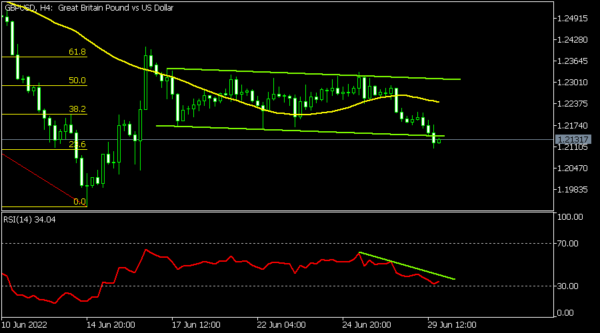 The EURUSD pair dropped to the lowest level since June 18 after the hawkish statement by Powell and Lagarde. It has moved below the 25-day moving average and the ascending trendline shown in green. The Relative Vigor Index (RVI) has fallen while the Williams % Range has dropped to the oversold level. The pair will likely continue falling, with the next key support being at 1.0400. 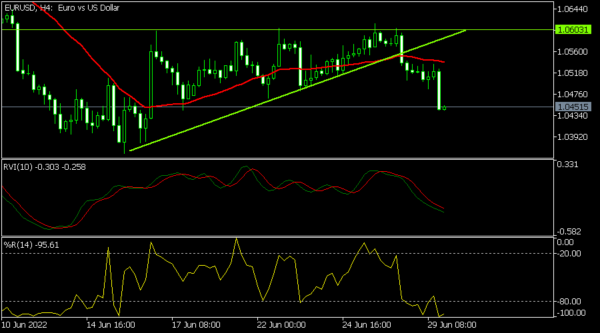 The EURCHF dropped below the parity level of 1.00 as the Swiss franc strength continued. It is trading at 0.9975, which was the lowest level since March this year. It has moved below the 25-day and 50-day moving averages while most oscillators have moved to the oversold point. The pair will likely continue falling as the Swiss franc gains momentum. 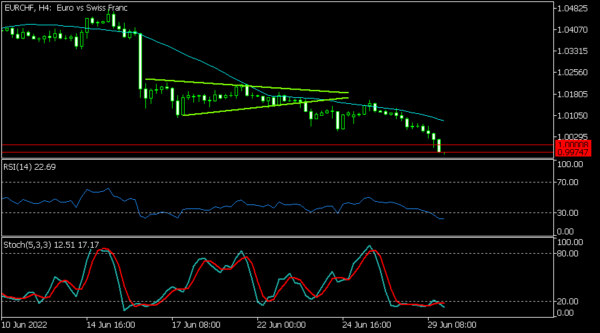