GBP/USD recovers as BoE to hike by 50bp

Sterling bounces higher as the Bank of England may deliver its first half-point hike since 1997. The UK’s inflation surged to a 40-year high at 9.4% band could reach a double digit in the autumn. When it comes to choosing between fighting soaring prices and preventing a downturn, it seems to be the same story all over again. Even the ECB has become more aggressive than expected with a 50 bp rate hike, the market is pricing in a similar-sized move this week by Governor Bailey and co. The downside risk would be a surprise with a dovish 25 bp increase. 1.1800 is a fresh support and 1.2300 the first hurdle if the rebound gains traction. 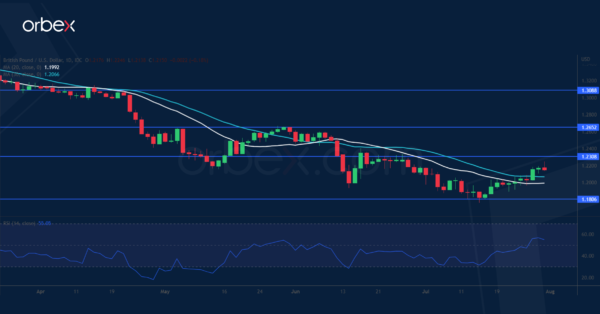 The Australian dollar rallies as the RBA speeds up its quantitative tightening. Australian inflation surged to a 21-year high in the previous quarter with no sign of peaking yet. In their latest economic update, the government painted a rather gloomy picture with growth forecasts revised down and inflation up. The central bank is expected to add another 50 basis points to its cash rate at the upcoming policy meeting. Meanwhile, cyclical commodities such as iron ore and copper have shown signs of stabilising, offering extra tailwinds to the risk-sensitive currency. The pair is testing 0.7070 with 0.6700 as a fresh support. 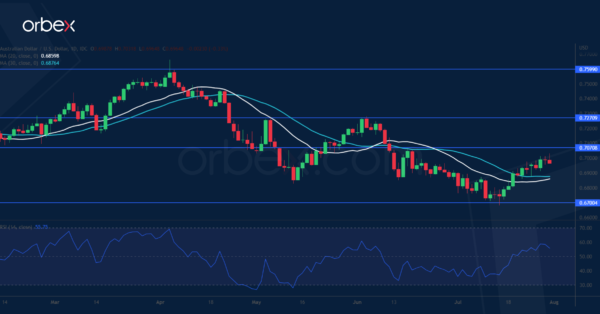 Gold recoups losses as the US dollar retreats in the wake of a less aggressive tone from the Fed. Chairman Powell has chosen to stay vague about his next move, with the decision hinging on economic data. The US economy unexpectedly shrank by 0.9% in the second quarter, cementing concerns that a recession is in sight. What the market actually cares about is whether the Fed could engineer a controlled slowdown which would convince them to lift their feet off the hike pedal. Such a prospect led traders to offload their dollars from a crowded bullish ride. Gold gained traction after it bounced off 1685 and is heading towards 1820. 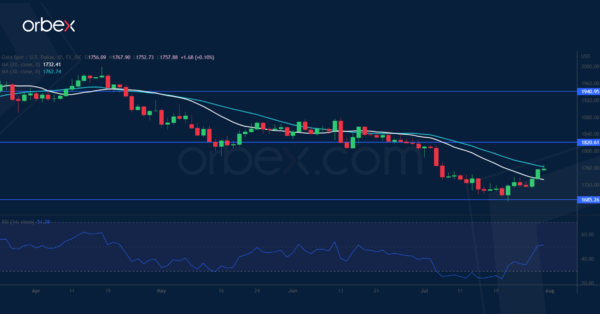 The Nasdaq 100 jumped after traders found relief in a subtle dovish shift in the Fed’s agenda. The latest 75bp rate increase was widely anticipated by the market. By leaving the psychological 100bp off the table, policymakers gave investors hope for a slower pace of monetary policy normalisation. Peak in interest rate expectations would ease strains on hard-hit growth stocks, whose valuations are heavily dependent on discount rates. Combined with upbeat revenues and earnings, albeit lowered analyst expectations, the tech index may attract bidders once again. 13500 is the next resistance to crack and 12100 a fresh support. 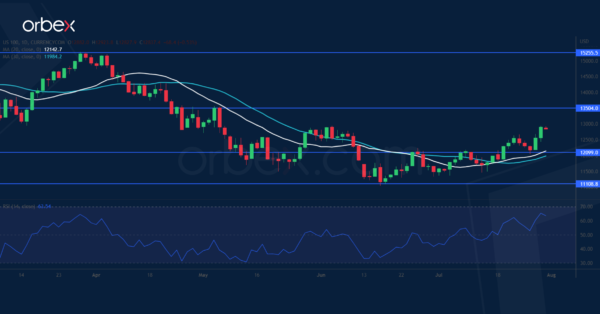