The total capitalisation of the crypto market, according to CoinMarketCap, rose 1.9% to $1.13 trillion overnight.

Bitcoin on Monday tested the area of the previous month’s highs around $24K, from where it had previously rolled back twice. Sellers’ pressure increased somewhat near the earlier highs following a moderate correction in stock indices, but the general consolidation trend with an upward bias persists for now. 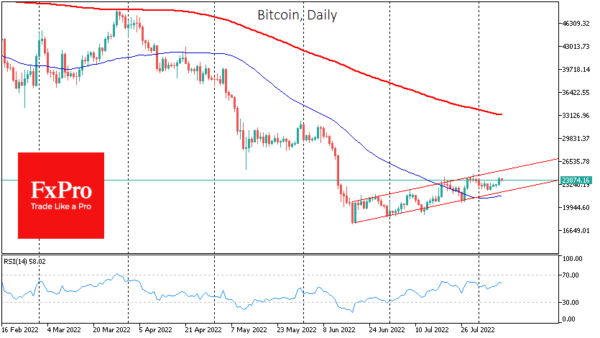 Ethereum co-founder Vitalik Buterin said the network’s impending move to PoS in September could boost the popularity of cryptocurrencies for everyday payments. According to him, the popularity of payments has fallen since 2018 due to high transaction fees.

Last week, BlackRock entered a partnership with Coinbase, under which BlackRock customers will be able to trade cryptocurrencies. Famous online analyst InvestAnswers believes the inflow of cryptocurrency funds from this investment company’s clients could push the BTC price to $773K.

According to Messari, investments in the crypto industry reached $30.3bn in the first half of 2022, more than the entire year 2021. According to Coin ATM Radar, around 15 cryptocurrencies are set up worldwide daily, with the total number exceeding 39K.