The US dollar rally has picked up a second wind, despite some signs that the US economy is losing steam. Investors seem much more concerned about Europe and China, which is helping the reserve currency attract safe-haven flows. Retail sales data and the minutes of the latest Fed meeting will hit the markets on Wednesday, providing fresh clues around how far interest rates might be raised in this cycle.

With the Fed opening the door for a slowdown in the pace of tightening and the latest batch of CPI readings signaling that inflationary pressures have started to lose power, it seemed like the relentless rally in the dollar was finally running out of juice. But that weakness didn’t last long.

As soon as the outlook for other major economies turned darker, traders rushed back into the reserve currency’s safety. China’s property sector is melting down and the latest data reflect the unfolding crisis, pushing investors away from currencies like the Australian or New Zealand dollars, whose economic models rely on China absorbing their commodity exports. 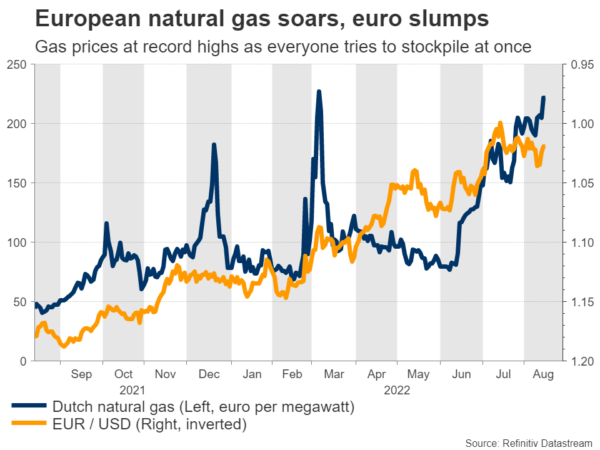 Meanwhile, Europe is still grappling with an energy shortage. Natural gas prices on the continent have pushed higher to challenge record highs as every country tries to stockpile for winter, keeping the squeeze on consumers and ravaging the euro.

In contrast, the US economy doesn’t look so fragile. While leading indicators like business surveys point to slower growth ahead, the labor market remains at full employment, calming some nerves about a deep recession. Currency trading is a relative game after all, so when other major economies struggle, the dollar naturally shines.

This week, the show will get started on Wednesday with the latest retail sales. Expectations are mixed, with the headline print anticipated to have ticked up in July while the core figure is seen slightly lower from last month.

Most importantly, the retail control group that is used in GDP calculations is projected to have risen at a solid clip, something supported by credit card spending data from Mastercard and JPMorgan Chase. The catch is that these prints are not adjusted for inflation. Once CPI inflation has been accounted for, real retail sales are negative for the year. 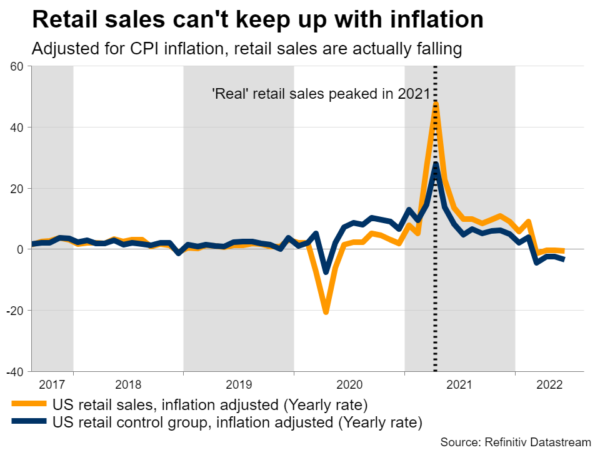 A few hours later, the minutes of the latest Fed decision will be released. This was when the FOMC raised rates by three-quarters of a percent but hinted that future moves won’t be quite so forceful. Market pricing for September is currently split, with traders assigning almost equal chances for a half-point or three-quarter point rate hike, so any fresh signals could swing the pendulum.

Fed Board Governor Bowman will speak right afterwards. Financial conditions have loosened lately with bond yields retreating and stock markets rallying, which is counterproductive for a Fed trying to slay inflation. Bowman might push back against this phenomenon and ‘massage’ market expectations after the minutes.

In case she talks a big game about future rate increases and financial conditions tighten, that could boost the dollar, helping euro/dollar pierce below the 1.0100 region and aim for another test of parity. 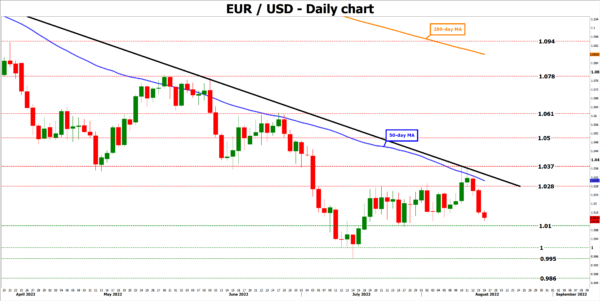 On the flipside, a disappointing batch of data or cautious signal from the minutes could enable a relief rally in the pair, with the first barrier to the upside likely to be the 1.0280 zone. That said, even if euro/dollar trades up to 1.0350, some 200 pips away, it would still be stuck in a clear downtrend.

Looking beyond this week, it is still difficult to envision any trend reversal in the dollar. For this ‘strong dollar’ dynamic to change, the landscape for the rest of the world needs to improve first.

A nuclear deal with Iran that sinks oil prices would be a good start, but the real game-changer would be a ceasefire in Ukraine. China abandoning its zero-covid strategy could also be pivotal. Until then, ‘king dollar’ is unlikely to lose its crown.