If the US economy is on the brink of recession, the front end of the US money market curve is not paying attention. The money market discounted 50bp interest cuts from Federal Reserve next year in July. It only discounts 14bp now. We find it reasonable for the market to pull back on expectations for interest rate cuts next year. Further, a couple of excerpts from the latest FOMC Minutes published on Wednesday backs our view. 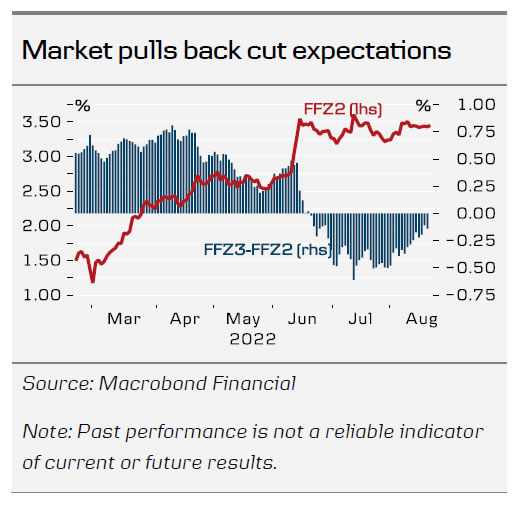 “Even so, with inflation elevated and expected to remain so over the near term, some participants emphasized that the real federal funds rate would likely still be below shorter-run neutral levels after this meeting’s policy rate hike.”

The 1Y real interest rate based on consumer’s inflation expectations (we use an average of surveys from University of Michigan, New York Federal Reserve and Conference Board) is about 1.5pp below the peak in 2018. In our view, Federal Reserve needs to increase the real interest rate to at least this level to combat inflation and possible even more. At least another 125bp of hikes over the coming months, as we expect, in combination with a moderation of inflation expectations would likely do the trick. 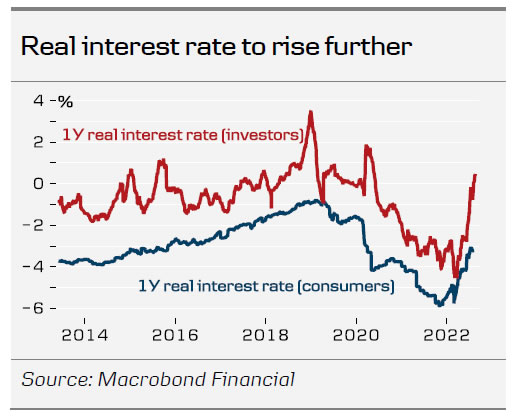 Financial conditions eased over the summer and some commodity prices started to recover – another signal that monetary policy is not restrictive enough yet. Thus, in order to avoid a resurgence in inflation, Federal Reserve needs to appreciate the USD, increase yields, weaken equities and/or widen credit spreads through tighter monetary policy.

“Some participants indicated that, once the policy rate had reached a sufficiently restrictive level, it likely would be appropriate to maintain that level for some time to ensure that inflation was firmly on a path back to 2 percent.”

Real GDP recovered near the pre-pandemic trend, but labour force participation remains lower. We do not think the economy has reached a new equilibrium, but rather that the output gap turned positive. The imbalance is the most evident in labour markets, where despite the recent easing in labour demand, job openings per unemployed remain near record-levels. 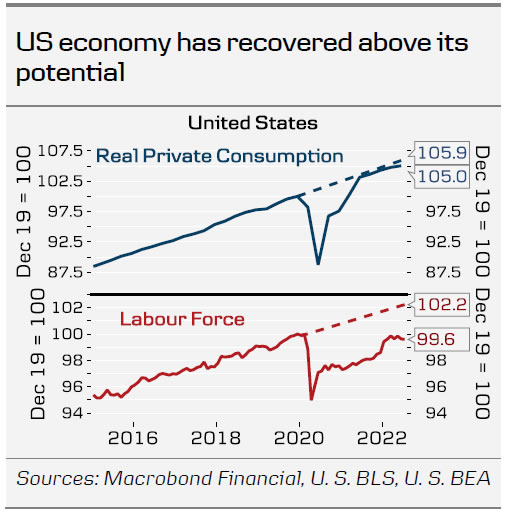 Unless demand is brought back to equilibrium, US economy could face an extended period of inflation exceeding the 2% target. Keeping interest rates at a mildly restrictive level for a period of time is one way to get rid of excess demand. Another would be to raise interest rates to a very restrictive level, e.g. by another 2-300bp. That would lead to a faster normalisation and open up for interest cuts next year. The money market, Federal Reserve and we lean towards the former scenario.