BoE call. We expect the Bank of England (BoE) to hike the Bank Rate by another 50bp at its next meeting bringing it to 2.25%. Markets are currently pricing around 65-70bp. We expect 50bp as opposed to 75bp, as we are more negative on the growth outlook. Also BoE has had a tendency to surprise to the dovish side at recent meetings. Additionally, BoE was the first G10 central bank to forecast a recession by Q4 2022 at its last meeting, while using a far more dovish market pricing as policy input than what is currently priced. We see this as a contributing factor to our base case as the growth outlook looks considerably worse now than back then given current market pricing.

We expect the BoE to repeat the message of a meeting-by-meeting approach effectively eliminating forward guidance, similar to both the ECB and the Fed. Note, that there will not be any updated inflation or GDP forecasts published at this meeting (interim meeting).

In light of recent developments we update our BoE call and now expect 50bp hikes in September, November and December followed by a final 25bp hike in February 2023. The endpoint is thus lifted to 3.25% (from 2.50%). We see possibility for further hikes in 2023, if we see underlying inflation pressures to prove persistent.

As outlined at the last meeting, we expect outright government bond selling to commence with a proposed bond sales of GBP 10bn per quarter, totalling a reduction in bond holdings of GBP 80bn over twelve months.

Fiscal policy. The newly elected Prime Minister Liz Truss recently announced an energy support package to households, capping the yearly energy bills at GBP 2,500 from October and two years ahead. This limits the planned increase of 80% in energy costs down to an estimate of 27%. In turn, this could result in inflation prints being lower in the near-term than first projected. In our view, this makes a 75bp hike less likely.

Meanwhile, with the package expected to be deficit funded, we could see upside to inflation down the road with inflation possibly proving to be more persistent. This could highlight the need for further hikes in 2023, yet amid the deficit funding uncertainty we still lean towards 50bp next week. 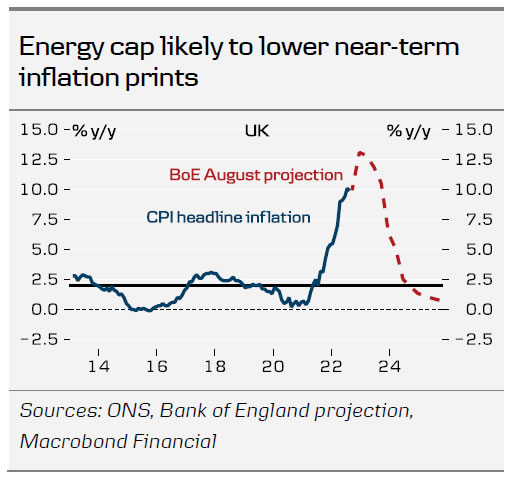 Growth outlook. We continue to expect the UK to head into recession in H1 2023. Although we expect fiscal stimulus to dampen the fall, it will not be enough to fully offset the erosion of real wage growth. Manufacturing PMI dropped to 47.3 in August and retail sales have started to show signs of slowing. The labour market is still very tight with high wage pressure, although the latest labour market data showed some signs that the labour market is losing some of its momentum with higher inactivity and more people stepping out of the work force. 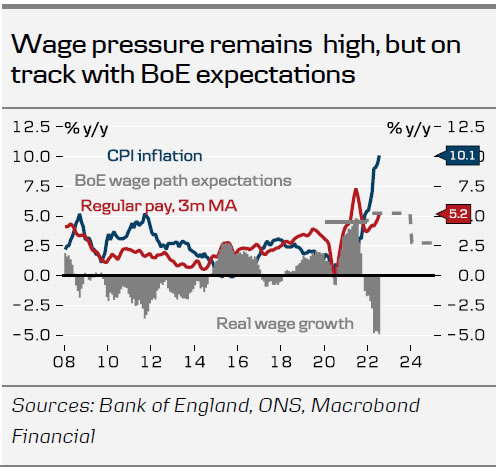 We still widely consider EUR/GBP a range play for the coming months, with GBP currently trading in the weaker part of the range at just below 0.87. Further out, we expect GBP to appreciate vs EUR in a USD-positive environment, which is why we expect the cross to move back towards 0.84 in 12M. We will look for GBP buying opportunities over the coming months as we do not yet like the timing.