The Pound’s Collapse Could Trigger Its Reversal

Last week, we said there has not yet been a final capitulation in many markets. However, we have seen such a capitulation in the pound, often followed by global market reversals. We could see both the interest of long-term investors and the activation of speculators with the bet that such volatility will encourage politicians to take action. 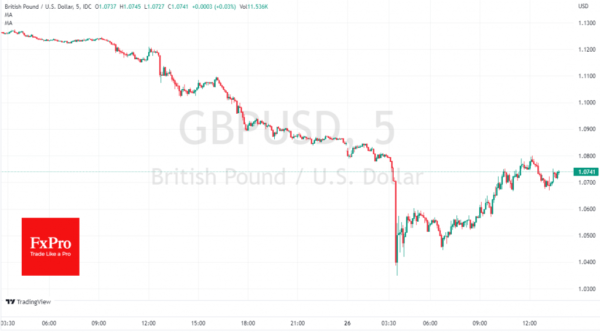 GBPUSD was down to 1.0330 at the start of trading on Monday, although it started Friday’s trading near 1.1250, losing more than 8%. Investors were disappointed by both the Bank of England’s measured pace of rate hikes and the government’s budget initiatives announced on Friday.

As GBPUSD had already been rewriting lows since 1985, the week before, the markets quickly approached the point of a massive and poorly controlled liquidation of positions on the pound, and the reduced liquidity in trading in Asia further amplified this.

As high market volatility could further damage the economy, such currency fluctuations generate enough attention for politicians to awaken to their actions. Debt markets are now pricing in an unscheduled rate hike by the Bank of England, although the previous one was as recently as Thursday. Locally, the pound has a supporting hand from market pricing that BoE will raise Bank Rate to 6% in this cycle. This is higher than in the US, and these hopes seem to fuel local buying by long-term investors. 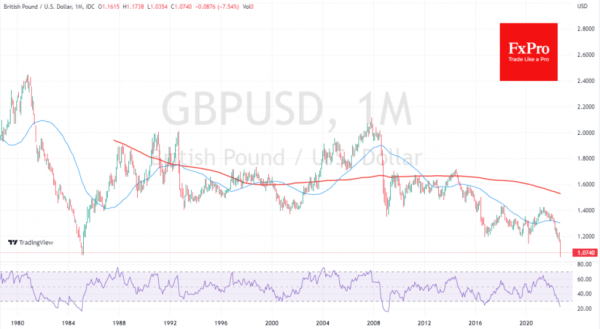 It will take broad and proactive steps by politicians, both the Bank of England and the government, to convince markets of a trend reversal. These steps are vital, not just desirable: a weaker pound is no longer working to improve export competitiveness but is making imports more expensive and undermining financial stability.

In 1985, the so-called Plaza Accord – an agreement on coordinated currency interventions by the world’s major central banks to weaken the dollar – stopped excessive dollar strengthening. For now, however, it is in the interest of the US to continue to allow the dollar to rise, to knock down the country’s inflation and commodities prices. Therefore, in our view, at this stage, we should expect the use of market-to-market currency interventions. Britain could follow Japan’s example by supporting the pound with direct purchases.