European equity markets are expected to open a little higher on Tuesday, buoyed by decent gains in Asia overnight and new record highs in the US on Monday.

The Reserve Bank of Australia left its cash rate on hold at 1.5% overnight and released a relatively neutral statement alongside it that praised certain elements of the global and domestic economy while once again warning about the detrimental effects of a strong Australian dollar.

The statement gave no indication that the RBA is preparing to raise or cut interest rates any time soon, with upside and downside risks aplenty providing the central bank little incentive to do so. The Aussie dollar fell a little after the release to trade below 0.78 against the dollar, back to levels last seen in mid-July. 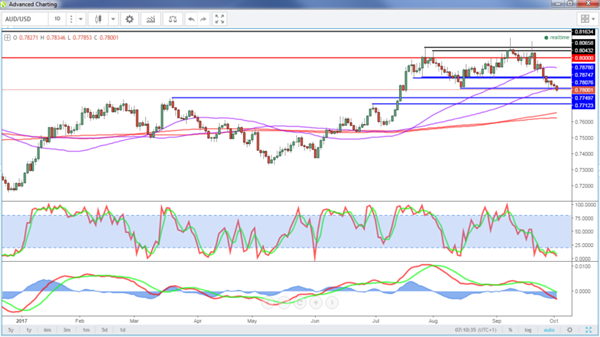 While political distractions will likely continue to tick over in the background – this week’s primary focus being the aftermath of the Catalonia referendum – this week is more about the economic data given the sheer volume of numbers being released. Spanish unemployment is up first today, with the data expected to show a second consecutive monthly increase, this time of 21,300. Given the general improvement in the labour market in recent years and the tendency of unemployment to rise at this time of year, I don’t think anyone will be too concerned by the data.

Construction becomes the latest sector in the UK to come under the microscope when the PMI survey for September is released this morning. Monday’s manufacturing PMI fell a little short of expectations but remained comfortably in growth territory, supported by the weaker pound, despite its recent recovery. The construction PMI is expected to remain unchanged at 51.1, having slipped back here after a summer of much more optimistic readings. The most important of the UK PMIs comes tomorrow though, with the services sector representing more than three quarters of economic output.

While there’s no US economic data being released today, we will hear from Jerome Powell who currently sits on the board of governors at the FOMC but is also one of the four candidates currently being considered for Chair of Federal Reserve once Janet Yellen’s term ends in February.