The cryptocurrency market lost another 7.7% to $900B over the past 24 hours, returning capitalisation to the area of September-October lows; at the peak of the decline, it was approaching the current market cycle lows set in June. Leading altcoins in the top 10 fell from 5.5% (BNB) to 22.9% (Dogecoin).

At its worst moment of market capitulation on Tuesday night, Bitcoin was down to $17.1K, renewing 2-year lows. Many potential long-term investors in cryptocurrencies are now trying to assess whether we saw a final surrender yesterday, followed by a reversal. So far, we have doubts that the most worrisome part is behind us. 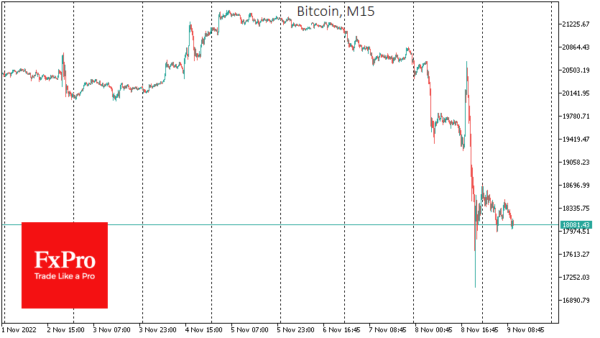 BTC’s sharp decline earlier in the day came amid an abrupt collapse in one of the largest crypto exchanges FTX’s own FTT token, which now trades at $4.6, having lost over 80% from $25.6 on Saturday. And all this on high trading volumes.

Another victim of the latest crypto chaos was Solana coin, which had lost 55% since Saturday before the crypto market went wild. 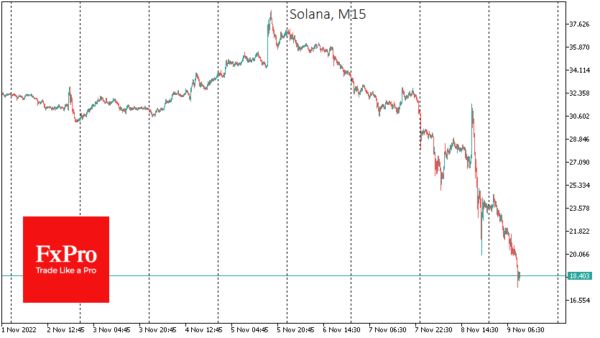 Despite some resolution, the news did not trigger a market recovery. Some experts say what has happened threatens the crypto market with significant disruption.

Other observers point out that the collapse of the crypto market occurred on the day of the US congressional elections, which could have triggered selling in an environment of uncertainty, which is always bad for risky assets such as cryptocurrencies.