The Bank of Japan has remained an outlier compared to the other major central banks which have been raising interest rates at a fast pace throughout 2022 in a synchronized attempt to bring inflation to heel. This resulted in a tumbling yen and forced Japanese authorities to intervene in the currency market in September and October. But, after hitting a 32-year low against the US dollar, the yen staged a comeback, with the BoJ coming under the microscope as investors try to figure out whether a policy tweak is on the cards sooner rather than later. The Bank meets early on Tuesday, but no policy action is expected.

Kuroda wants to see wages at 3%

At its latest gathering, the BoJ kept its ultra-loose policy untouched and maintained its dovish guidance that interest rates will remain at “present or lower levels”.

After that gathering, Governor Kuroda has been adamant on the need to maintain ultra-low interest rates and pushed back against calls for reviewing the policy framework. He has been also repeating that the rise in core consumer prices is driven mostly by surging import costs and that inflation would return back to 2% during the next fiscal year. In a semi-annual testimony before parliament, he noted that the Bank needs to focus on supporting growth until wages increase more, adding that they need to rise by around 3%.

With average monthly cash earnings slowing to 1.8% y/y in October from 2.2% in September, and headline inflation accelerating to 3.7% y/y from 3.0%, real wages shrank the most since July 2020. Combined with the GDP data revealing a small contraction during Q3, this makes the case for any change in policy or language at Tuesday’s meeting unlikely. 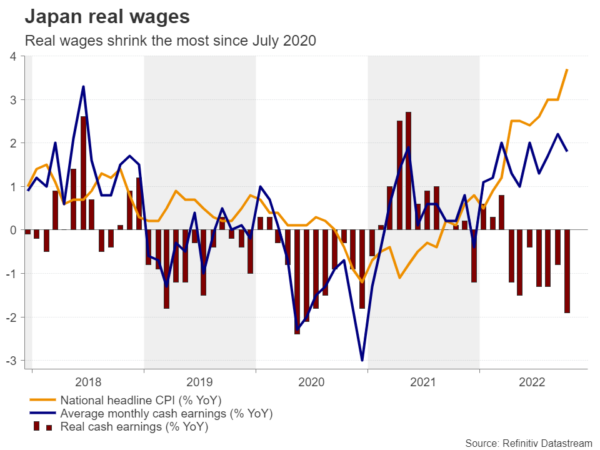 Officials unlikely to pull a rabbit out of a hat

What adds to that hypothesis is that this meeting will be one of the smaller ones that are not accompanied by updated economic projections. Moreover, inflation excluding fresh food and energy rose to 2.5% y/y in October, not far above the BoJ’s target and well below the core metrics of other major nations, whose central banks have already started slowing their tightening crusades. 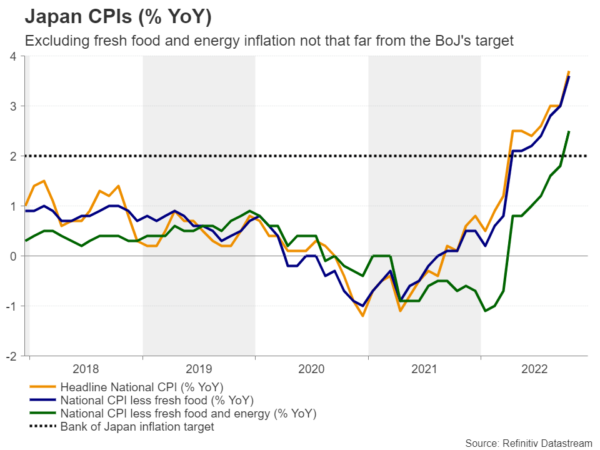 Yes, the spotlight is likely to fall on Kuroda’s post-meeting briefing, but he might decide to not pull a rabbit out of his hat and perhaps wait for the January gathering, the last that offers an economic outlook and updated projections before he steps down on April 8. And yet, if data allows them, officials could wait a bit longer, perhaps after the “shunto” spring wage talks in March, when blue-chip firms meet with unions to discuss salaries for the upcoming fiscal year.

Yen unlikely to react at the decision, recovery may continue

Putting everything together, the yen is unlikely to be affected much by Tuesday’s decision. With dollar traders not touched by the Fed’s last hawkish play for 2022, narrowing yield differentials between the US and Japan could continue working in favor of the yen. The currency might also reclaim its safe-haven status in case concerns about the performance of the global economy resurface. Should market participants continue pricing in 50bps worth of Fed rate cuts by the end 2023, the yielding dollar could lose the title of the “ultimate safe haven”, and dollar/yen may continue to slide. 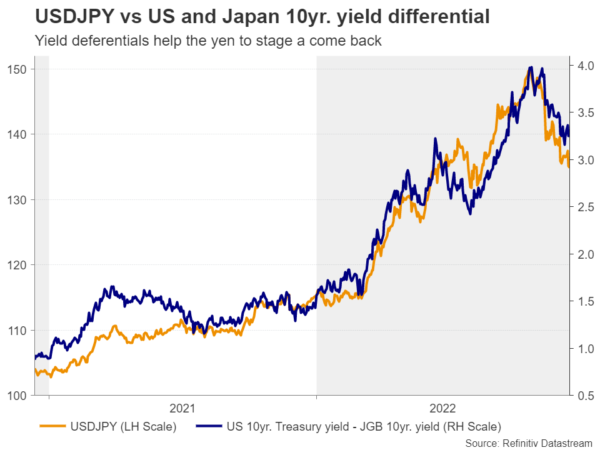 Such a dip could pave the way towards the 130.50 barrier, marked by the low of August 2, and if there are no buyers to be found there either, then the downtrend may extend towards the 126.50 territory, defined as a support by the low of May 25. 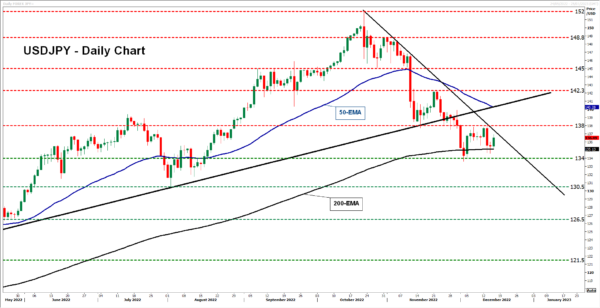 For the bearish outlook to be dismissed, a break above the high of November 22 at 142.30 may be required. This would signal the pair’s return above both the moving averages and the two aforementioned trendlines, and may encourage the bulls to climb towards the psychological zone of 145.00 marked by the inside swing low of October 27. That zone was also proven a strong resistance between September 7 and October 4, but if it fails to stop the advance this time, the rally could stretch towards the 148.80 territory, marked by the highs of October 30 and November 1.