Action Forex
HomeContributorsFundamental AnalysisWeek Ahead – Markets Quiet Down for Holidays, Liquidity in Control

Week Ahead – Markets Quiet Down for Holidays, Liquidity in Control

A quiet week lies ahead for FX markets as the year draws to a close. The spotlight will fall on the Bank of Japan’s summary of opinions, which will add some color around the recent decision to raise the yield ceiling that propelled the yen higher. More broadly, liquidity will be in short supply, making sharp market moves possible without any news catalyst.

In a surprise move, the Bank of Japan adjusted its yield curve control strategy this week, widening the range in which long-dated Japanese yields are allowed to trade. Governor Kuroda downplayed the action as simply ‘fine-tuning’ of policy to ensure smooth functioning in the nation’s bond market, stressing it wasn’t really tightening.

But market participants didn’t see it that way. With inflation firing up and the government preparing to roll out a $200bn stimulus package, investors saw this move as laying the groundwork for proper rate increases next year. 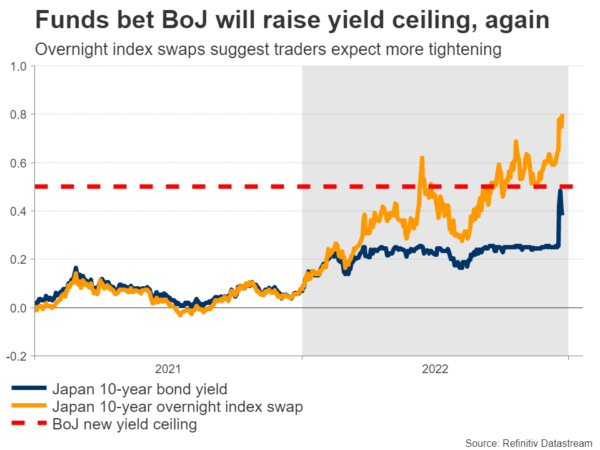 Markets now expect the BoJ to exit negative rates by April, pricing in a 15bps rate hike that would bring rates back above zero. That’s when a new BoJ Governor will take over, so traders are essentially betting that the change in leadership will usher in a new era of monetary tightening in Japan.

In this respect, the summary of opinions from the BoJ’s December meeting will be closely watched on Wednesday. This release is similar to the meeting minutes. It contains less detail, but it’s released much sooner, elevating its importance. Traders will look for any hints around future policy tweaks – was this really a one-off move like Kuroda suggests or the first step in a process?

As for the yen, the tide has started to turn, setting the stage for a comeback next year. Most of the forces that ravaged the currency this year – interest rate differentials, a trade shock arising from soaring energy prices, and a lack of tourism – are fading away. 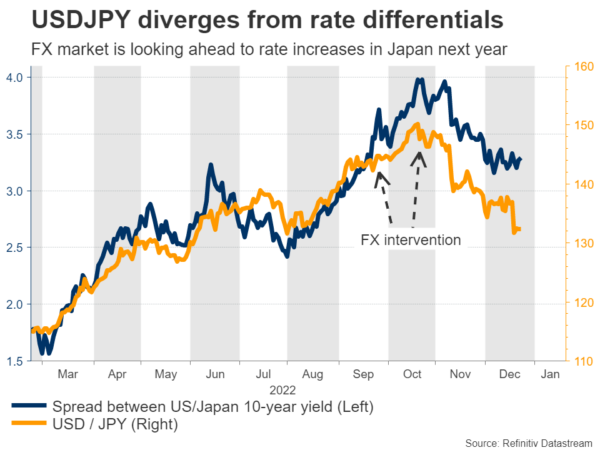 Tourists are allowed back on the island, while oil prices have declined to trade almost unchanged for the year. Most importantly, the BoJ might be tightening next year as foreign central banks stop their own tightening cycles, which alongside recessionary concerns might help compress yield differentials back in the yen’s favor.

The biggest undecided variables are who will replace Kuroda as BoJ Governor and how much wages will rise when the labor negotiations conclude. Both events are scheduled for the spring, so the next few months will be critical for the yen.

Over in America, Monday is a public holiday, so markets will remain closed. The rest of the week is relatively calm, with the only noteworthy data releases being Wednesday’s pending home sales and a variety of regional business surveys throughout the week, which traders usually overlook. 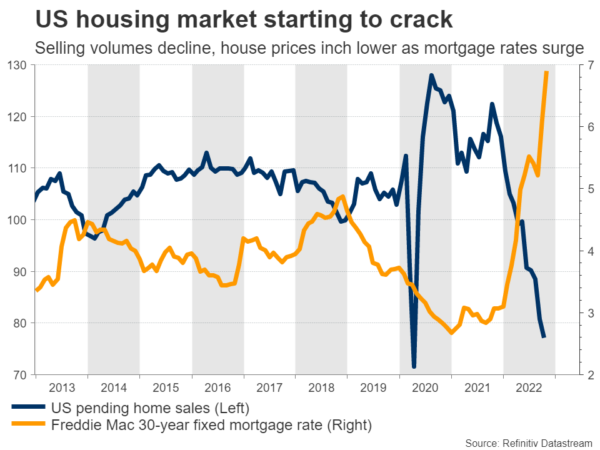 The main story might be the scarcity of liquidity. With many investors closing their books for the year and many traders away from their desks, liquidity will be thinner than usual. This means that markets can move sharply without any news, and that any actual headlines could have a much greater impact. As such, any moves in the coming week might be more ‘noise’ than ‘signal’.