Could Canadian Data Steal the Spotlight from US Jobs Report?

The first week of the new trading year tends to be very busy with data releases, but the market’s attention usually falls on the US employment report, non-farm payrolls in particular. The Canadian labour market statistics tend to stay away from the spotlight, but nevertheless remain significant for overall market sentiment. Especially as the Bank of Canada is hosting its first meeting for 2023 in just three weeks on January 25 – the Bank of Japan meets a week earlier on January 18.

It is obvious that inflation was the buzzword for 2022. The geopolitical developments along with the Chinese issues pushed oil prices higher and complicated supply lines forcing central banks globally in an unprecedented rate hiking cycle. The BoC raised rates by 400 bps to the current level of 4.25%, with the last 50 bps move coming on December 12. Since the market seems eager to distance itself from inflation and turn its focus to the recession fears, employment data could potentially provide some indication of the possible troubles ahead. Traditionally, the unemployment rate is a lagging indicator, but market participants and central bankers would be examining the entire labour market statistics suite. 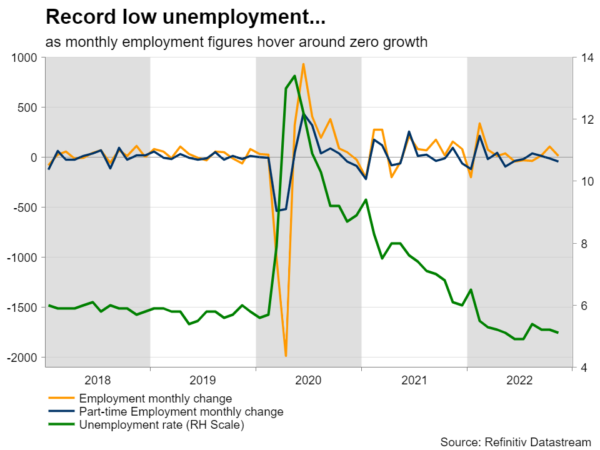 On Friday, the December unemployment rate is expected to rise just a tad to 5.2% from 5.1% in November, while the participation rate is seen stable at 64.8%. Monthly employment is forecast to jump by just 8k following the 10k print in November, and miles lower than the 108k increase in October. A possible surprise in the latter could trouble the minds of central bankers on January 25. The market is currently pricing in a 59% probability of a 25-bps rate hike – the most conservative market pricing among the main central banks, excluding the uber-bearish BoJ. In the meantime, the market is fully pricing in a 25-bps increase from the Fed and assigns a respectable 31% chance of an even stronger move of 50-bps at the February 1 meeting. If we get a plethora of upside surprises in this set of data, there could be renewed chatter about further tightening ahead. On the other hand, a negative bunch of data could add fuel to the recession fire currently spreading across the developed economies.

On the same day we also get the less-advertised average hourly wages year-on-year changes and the Ivey PMI. The latter is less known than its S&P Global manufacturing PMI counterpart, but as it covers the overall Canadian economy, it tends to give a more accurate depiction of the underlying economic forces in play. While the manufacturing PMI yesterday managed to record another small drop to 49.2, the Ivey PMI is seen remaining above 50. Interestingly, the prices paid subindex could continue its downward trend, partially confirming market expectations for lower headline inflation going forward, but also reducing fears for a secondary round of effects on inflation from increased wages. 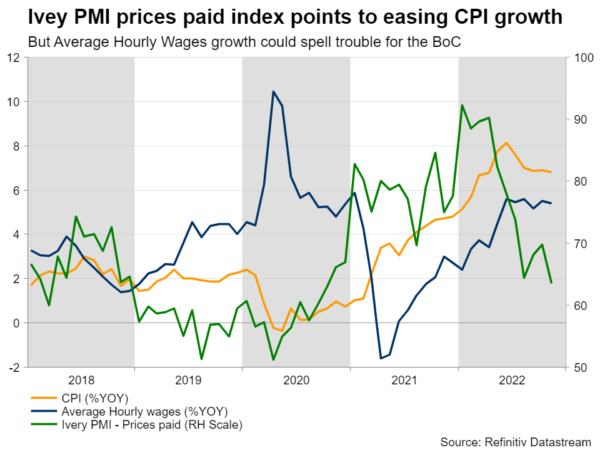 Could the loonie finally record and hold gains against the dollar?

The dollar/loonie pair has been a one-way street since the middle of 2021, climbing to a 2½-year high of 1.3977 on October 13. The loonie has since been trying to make gains but the tide does not appear to have turned in its favour yet. An upside surprise at Friday’s data could allow the CAD bulls to attempt a comeback and thus push the pair towards 1.3520 where the trifecta of the upward sloping trendline, the 50-day simple moving average and the 38.2% Fibonacci retracement of the October 13 downtrend all reside. If successful, the next target could be the 1.34 area. On the other hand, weaker data prints on Friday could inspire the CAD bears to finally break the 1.37 area and potentially, then aim for the 1.3807 level. 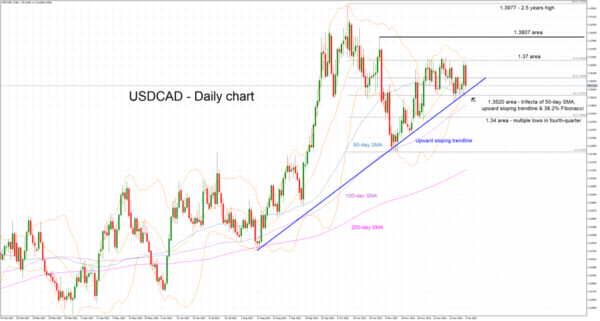