Trading in the new year will fire up with the latest US employment data on Friday. Forecasts point to another solid jobs report, although business surveys warn that the labor market has started to lose steam. As for the dollar, calls about its demise and a bearish trend reversal still seem premature.

The US dollar rally lost some steam in the final stages of 2022, but nevertheless, the reserve currency still came out as the big winner of the year. It was a story of interest rate differentials as the Fed raised rates faster than other central banks, safe-haven flows, and an absence of any attractive alternatives.

Looking into 2023, the question is whether the dollar will remain the ‘alpha’ in the FX complex or whether a bearish reversal is on the cards. There’s a case to be made that it might be a year of two halves, with dollar strength persisting early in the year, only to reverse later on.

The logic is that America is in better shape than most other economies, partly because its vast energy production helped shield it from the global power crisis, and partly because higher interest rates take longer to impact US economic activity. Most US mortgages are on fixed rates, so it takes some time before higher rates can slow the economy, as most homeowners are not directly affected. 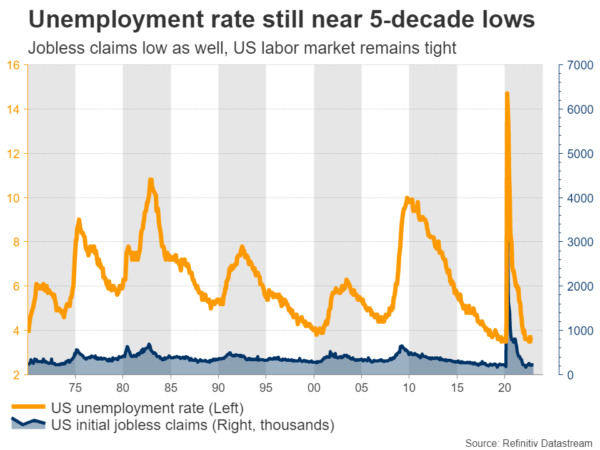 In contrast, other economies such as the Eurozone, United Kingdom, Australia, and Canada have many of their mortgages at variable rates that reset each year. This means the harmful effects of higher rates in these economies will show up much faster, setting the stage for a period where America outperforms mostly because of policy transmission lags.

This is also why the US labor market has not shown any signs of damage from higher rates yet. Economists expect another solid employment report for December, with nonfarm payrolls anticipated at 200k and the unemployment rate seen unchanged at 3.7%. The only dark spot is wage growth. Average hourly earnings are projected to have slowed to 5.0% in yearly terms, from 5.1% in November.

As for any risks, the number of people filing for unemployment benefits remained low during the month, so this dataset won’t reflect any real job losses. That said, business surveys from S&P Global noted that employment levels barely rose and job creation almost crawled to a halt, which suggests weakness is slowly creeping in. In other words, the jobs market is losing steam, but it’s probably too early for that to show up. 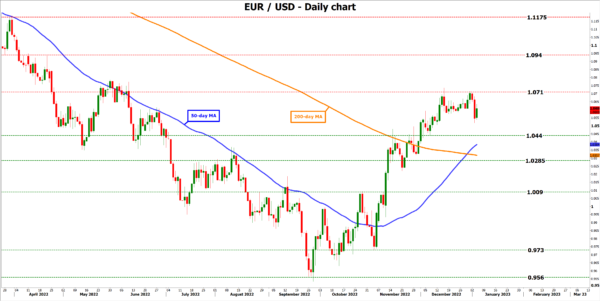 Market pricing currently suggests the Fed will slow down the pace of its rate increases next month. In case of a strong jobs report though, traders might have second thoughts about that, helping to boost the dollar. Taking a technical look at euro/dollar, initial support to any declines may be found near the 1.0440 zone.

On the flipside, a surprisingly soft report could propel the pair higher, with the first obstacle to the upside likely to be the recent high around 1.0710.

Note that the ISM non-manufacturing survey will also be released shortly after the jobs report.

Dollar down, but not out

All told, calls for a bearish trend reversal in the dollar still seem premature. Even though the Fed is approaching the end of its tightening cycle, it might keep rates high for a longer period than other central banks will, because of the aforementioned policy lags. 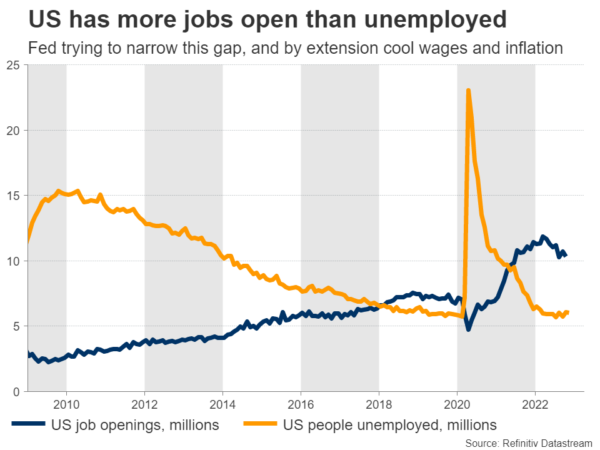 On a simpler level, America is stronger than most economies. Business surveys suggest recession risks are greater in the Eurozone and United Kingdom, China is dealing with the painful deleveraging of its property sector, while nations like Canada and Australia have housing markets that are vulnerable in a higher rate environment.

Historically speaking, the dollar tends to depreciate when the global economy is booming and capital leaves the United States, searching for higher returns abroad. That’s not the case today, hence why it is still too early to envision a sustained downtrend in the reserve currency.