China picked up the torch this morning with the publication of national inflation data. In December, the consumer price index rose from 1.6% to 1.8% y/y. Producer prices, an important leading indicator for national and global inflation, are losing 0.7% y/y, the third consecutive month of y/y decline. While consumer prices matched expectations, producer prices came in well below analysts’ average forecast of -0.1%. 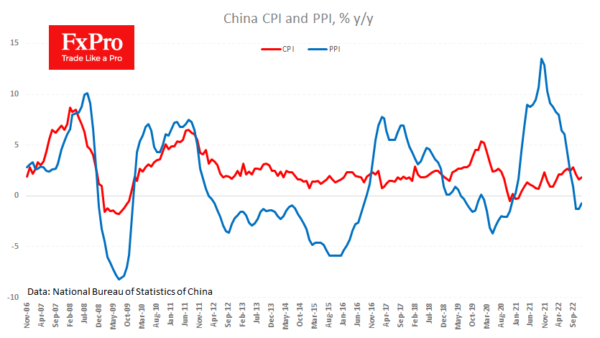 In contrast to much of the world, China faces low rather than high inflationary pressures – the tail-end effect of austerity policies due to quarantines that have stifled economic activity. Some are suggesting a contraction of the economy in the first quarter, and the trend of a sharp slowdown coupled with widespread unrest was a fundamental reason for the December withdrawal of the 0-covid policy.

Overall, the opening of the economy promises to be a crucial pro-inflationary factor capable of pushing up global commodity prices. But China also buys more from Russia and Iran at a discount and is almost a monopoly buyer. At the same time, China is re-establishing coal purchases from Australia, which can also keep domestic prices down. 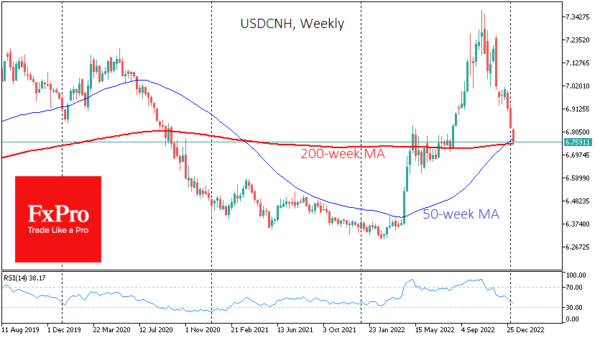 In the same direction, the appreciating renminbi has risen by 2.3% against the dollar since the start of the year and by 8% from its peak in November to 6.75 USDCNH, where the pair had consolidated before from May to August. On the weekly charts, the USDCNH struggles for long-term trends as the pair trades between the 50- and 200-week averages. Overcoming these levels in the last three years has triggered powerful moves. And now, similarly, it could be the starting point for a strong movement.