The Bank of Japan will kick off the central bank policy decisions of 2023 when it begins its two-day meeting on Tuesday, with the outcome expected in the early hours of Wednesday. Although it was only at the last meeting in December when policymakers tweaked their yield curve control (YCC) strategy, a further change in policy cannot be ruled out in January. The Bank’s upper yield cap has come under attack again amid speculation that it will further widen the target band or abandon the controversial policy altogether. Expectations that a stimulus exit is around the corner have propelled the yen in recent weeks, and there could be more gains in store in the near term.

It’s all about the timing

The December decision to increase the band around the 0% target for 10-year Japanese government bonds (JGB) by 25 basis points to ±0.50% came as a complete shock for the markets. The prior ceiling of 0.25% had been under pressure for some time but policymakers had remained resolute in not altering their stance until there was clear evidence of wage growth picking up. Governor Haruhiko Kuroda had provided some subtle hints of an adjustment, but the timing was still unexpected.

This time round, the noises for an exit from easy policy have become louder, but there is again a very high degree of uncertainty around the timing. One media report suggests policymakers want to take their time to assess the impact of the recent widening of the yield band, while another report indicates a further tweak might be needed to improve the functioning of the JGB market.

It’s arguable if BoJ has begun to tighten policy

Japan’s 10-year yield briefly spiked above the upper band on Friday as investors upped their bets that the Bank of Japan will soon join the global tightening race. After the December meeting, Kuroda has gone out of his way to refute claims that the action amounted to tightening, and he does have a point, just not in the intended way. 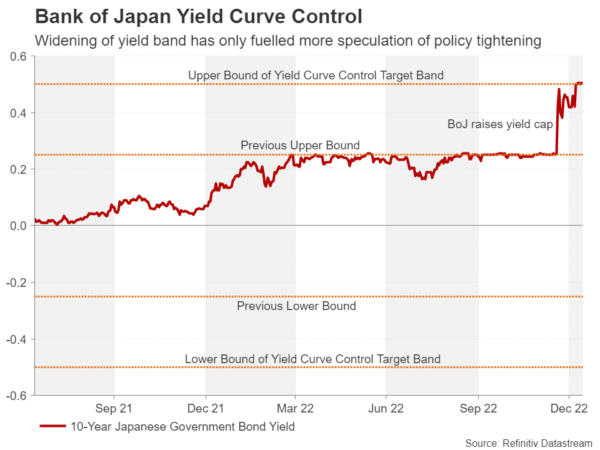 The Bank has in fact had to increase its purchases of 10-year JGBs since the move, which opened the door to a flurry of speculation about an impending exit from YCC. Another tweak, say to widen the band from ±0.50% to ±1.00%, is possible. But what would be the point? The BoJ took its previous decision in the hope of making YCC policy more sustainable. But investors are unlikely to let up in their push to test the BoJ. Even though the Bank holds a large chunk of issued JGBs, the illiquid market also makes it more prone to volatility from selloffs, especially from foreign speculators.

This then begs the question, if a further widening would be ineffective, could the BoJ completely ditch YCC? The odds of that happening by the March meeting before Kuroda’s term expires in April, or right after when a new governor takes over, are rising by the day. But January might be too soon. Although inflation in Japan continues to head higher and is fast approaching 4%, energy prices are retreating so it may only be a matter of time before CPI peaks in Japan too. 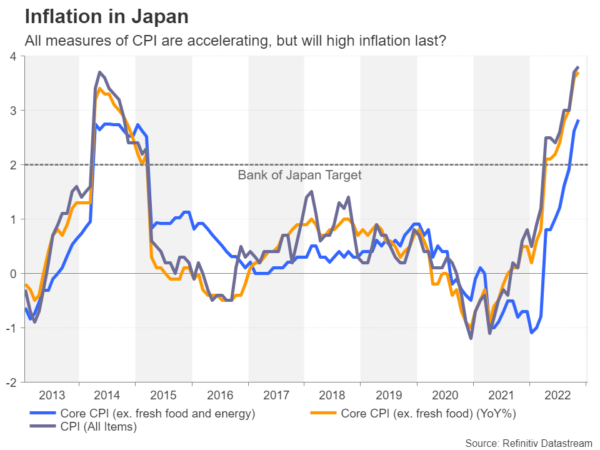 Another advantage for policymakers to wait until at least the March meeting before making up their minds on further policy changes is that Japanese trade unions conduct an annual round of wage negotiations each spring to set pay for the new fiscal year. The BoJ will probably want to wait and see how big the wage increases will be, as this has been a key criteria for policy tightening for some time now.

Wages could hold the key to next policy twist

In spite of real wages declining in recent months as inflation climbs, there are some encouraging signs that pay rises in Japan are finally starting to accelerate. One retailer just announced a 40% pay hike for its employees. Moreover, BoJ officials appear to be toning down their view lately that the current cost-push-driven inflation isn’t sustainable and that only through real wage growth can Japan break free from its deflationary mindset.

If the price increases continue to broaden in the coming months, policymakers are likely to grow more concerned about inflation becoming entrenched, even in the absence of substantial wage gains. There could be some clues on this from the BoJ’s updated outlook report on Wednesday where inflation forecasts are anticipated to be revised higher.

Yen is on a roll

Should the BoJ bide its time and keep its monetary policy settings unchanged in January, but significantly revise up its CPI projections and potentially also drop its easing bias, the Japanese yen could attract more buyers. The US dollar slumped to a seven-and-a-half-week low of 127.21 yen on Monday, brushing the 50% Fibonacci retracement of the January 2021-October 2022. A breach of this support area would become more likely.

However, if policymakers conclude that defending the yield target is no longer tenable and pull another surprise by abandoning YCC, the yen would be set for a more powerful gains, extending the rally until at least the 61.8% Fibonacci of 121.43 yen before aiming for the crucial 120 level.

In the dovish scenario where there is no indication of a near-term policy shift in either the statement or Kuroda’s press conference, the yen could enter a consolidation mode, allowing the dollar to reclaim the 130 handle in the short term.

Markets think a rate hike is also on the cards

There is a slight danger that even in the event of a less dovish-than-expected meeting, any surprise won’t have as much impact the second time given the extent of the yen’s advances recently. In addition, investors are not just betting on an end to quantitative easing, but also for an end to negative rates.

Interest rate futures have priced in about a 35% probability of a rate hike from -0.1% to 0.0% in January, so there is some scope for disappointment. Nevertheless, any respite in yen buying is likely to be temporary as the Bank of Japan seems poised to start tightening at some point in 2023, just as other central banks reach the end of their rate-hike cycle.