Are US Retail Sales the Dollar’s Next Big Test?

Last week, it was again confirmed that the US inflation data is the dollar’s biggest nightmare. The currency tumbled and hit a new 7-month low on Monday as investors were further convinced that the Fed may eventually need to cut interest rates at some point this year. As they seek extra validation to their view, this week, traders are likely to pay attention to the US retail sales for December and the PPIs for the month, both due to be released on Wednesday at 13:30 GMT.

Last Thursday, both the headline and core CPI rates for December declined to 6.5% y/y and 5.7% y/y from 7.1% and 6.0% respectively, matching expectations. However, what came as a surprise and perhaps prompted traders to sell more dollars may have been the monthly CPI rate.

Instead of stagnating as the forecast suggested, consumer prices declined 0.1% m/m, adding credence to the view that inflation may be on a sustained downtrend and that the Fed would eventually need to cut rates later this year, even as some officials continued arguing after the data that no cuts are on the table after interest rates hit their terminal level.

Market participants are now pricing in a 90% chance for the Fed to proceed with a 25bps hike at its upcoming gathering, something also supported by some officials lately, and they are anticipating a terminal rate of around 4.92%. That’s below the Fed’s median dot for 2013, which is at 5.125%. Most importantly, investors are still expecting 50bps worth of rate reductions by the end of the year, while various Fed speakers have suggested that rates will remain steady for many months, once they reach their peak. 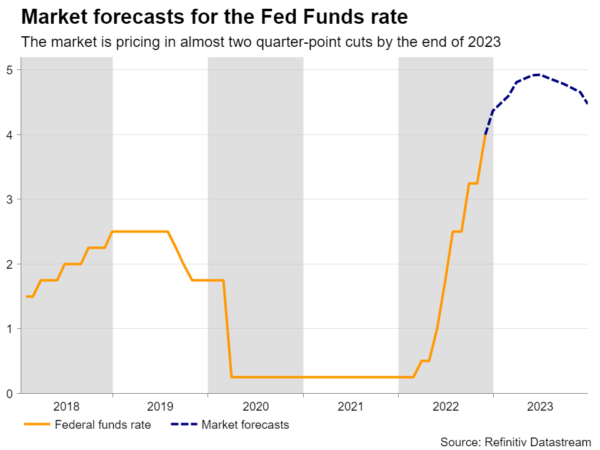 US retail sales to continue deteriorating

This week, both headline and core retail sales are forecast to have declined further and more than in November. Specifically, expectations are for both rates to slide to -0.8% m/m and -0.4% m/m from -0.6% and -0.2% respectively. This means that consumers are becoming more reluctant to spend, which could bring inflation further down in coming months, something also supported by the PPI forecasts. Both the headline and core PPI rates are expected to have continued declining, with the monthly headline print expected to tick into the negative zone just as the CPI rate did. 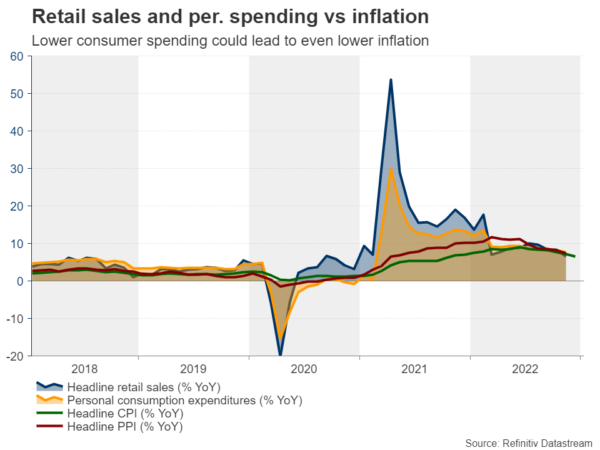 Having said all that though, deteriorating consumer demand also means softer economic growth. Releases relating to economic growth prospects have been worsening, with one of the latest examples being the ISM non-manufacturing PMI for December, which fell into contractionary territory for the first time since May 2020. Coming on top of the further contraction in the manufacturing sector, a shrinking service sector (which accounts for around 77.6% of US GDP) is anything but encouraging. So, another soft retail-sales data set could ring more alarm bells. 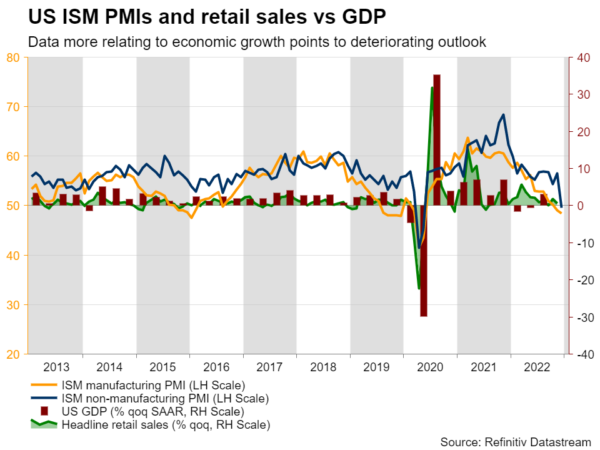 Expectations of softer inflation blended with concerns about the performance of the US economy could further solidify investors’ opinion that the effect of the prior interest rate hikes may not be fully reflected in economic data yet, and that consequently interest rates may need to be cut at some point later this year. This could result in much more dollar selling, especially against the euro and the yen.

With underlying inflation in the Eurozone continuing to accelerate, the ECB is expected to keep raising interest rates more aggressively than the Fed henceforth. As for the BoJ, last week’s reports that officials may proceed with additional action at Wednesday’s meeting to correct distortions in the yield curve added to speculation that the BoJ may be starting its own tightening crusade at a time when the Fed is headed for the exit.

Will euro/dollar extend its recovery to 1.1175?

After the US inflation data, euro/dollar emerged and closed the day above 1.0800. Now, it is pulling back, but even if it falls back below 1.0800, the prevailing short-term trend will remain positive as a higher high is already confirmed.

A potential setback below 1.0800 could trigger buying orders near the 1.0715 barrier and another round of soft US economic data could result in a rebound back above 1.0800. Such a move could pave the way towards the 1.1175 territory, which acted as a resistance on March 31 and provided strong support between November 2021 and February. 2022.

On the other hand, stronger-than-expected US retail sales could encourage some dollar buying and perhaps take euro/dollar below 1.0715. However, the pair would still be above the uptrend line drawn from the low of September 28, and thus, such a retreat may be seen as a corrective move before the next leg north. For the outlook of this pair to shift to bearish, a clear break below parity may be needed.