Will BoC Press the Hike Button One More Time?

After signaling that it will be considering whether interest rates need to rise further on a meeting-by-meeting basis, the Bank of Canada was seen as the first major central bank to end its tightening crusade. However, the stellar employment numbers for December sparked speculation that another quarter-point hike may be delivered at this week’s gathering, on Wednesday, before the curtain falls on rate hikes. Will the BoC meet those expectations? And if so, how will the Canadian dollar react?

Inflation and employment allow another hike

At its December meeting, the Bank of Canada raised interest rates by 50bps, confounding expectations of a quarter-point hike. However, what attracted more attention was the change in the Bank’s guidance, with officials noting that they will be considering whether the policy interest rate needs to rise any further, hinting that this could have been their final move in this tightening crusade.

The market took that statement seriously and immediately priced in no more increments. However, data releases thereafter convinced investors that December may not have been the last time officials pressed the rate-hike button. Yes, headline inflation slowed further in December, to 6.3% y/y from 6.8%, but underlying metrics have not shown signs of a significant slowdown yet. This suggests that headline inflation may be easing due to the decline in prices of volatile items, like energy. With all underlying metrics at 5% or higher, another rate hike cannot be ruled out. 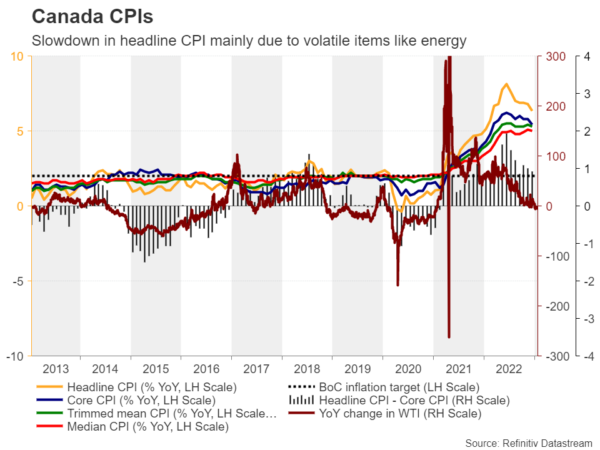 What adds more credence to the argument of another hike is the nation’s latest employment report, which revealed that the economy added 104k jobs during December, pushing the jobless rate down to 5.0%, just a tick above the record low seen over the summer. What’s more, the cooling of inflation since the summer months, combined with the upward trend in salaries, resulted in improvement in real wage growth. Although wages continued to contract, it was at a much slower pace than in May, when they fell at their steepest rate in more than 20 years. 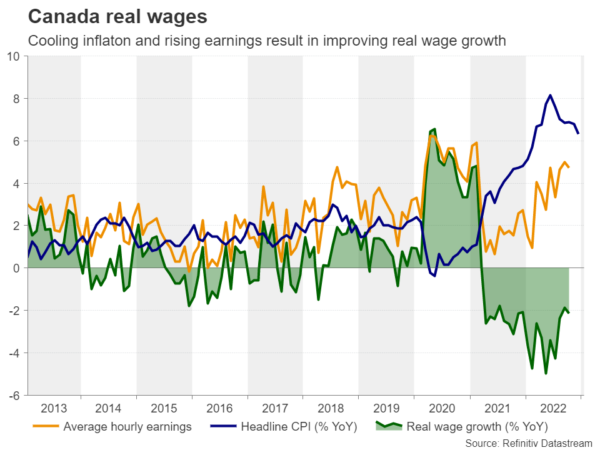 Having said all that though, the BoC business outlook survey for the last quarter of 2022 showed that most businesses expect a mild recession over the next year due to high interest rates curtailing investment plans and consumer spending. Such concerns corroborate investors’ view that this week’s hike may be the last one and that Canadian policymakers may need to start considering rate reductions at some point later this year. 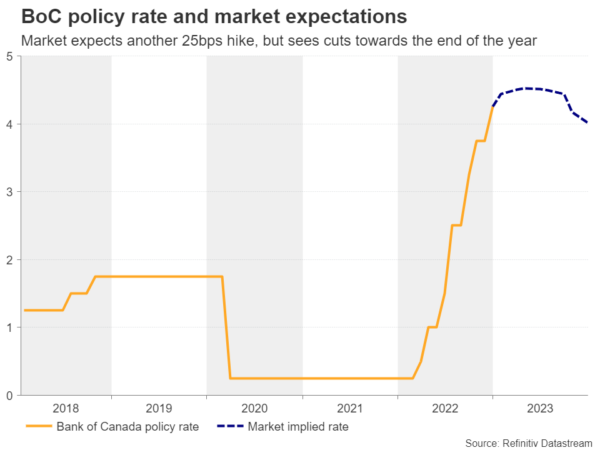 Specifically, investors are currently assigning a nearly 73% probability for a 25bps hike with the remaining 27% pointing to no action. More interestingly, they are expecting 50bps worth of rate cuts by the end of the year.

Risks surrounding the Loonie likely tilted to the upside

Ergo, considering that a quarter-point increment is not fully priced in, the Canadian dollar could strengthen if indeed policymakers decide to press the hike button, and it could gain even more if they reiterate the guidance that they will be considering whether more hikes are needed. That was the wording that hurt the Loonie at the last meeting, but with the market now almost certain that there will be no other rate rise, the same phrase could be interpreted as leaving the door open to additional hikes. Also, any communication underscoring that interest rates will stay untouched for a prolonged period after they hit their peak could add extra fuel given the market’s pricing for cuts later this year. For the Loonie to come under selling pressure, BoC officials would need to refrain from hiking this week or deliver the 25bps and officially announce the end of this tightening cycle.

Putting everything together, the risks surrounding the Canadian dollar arising from Wednesday’s gathering may be tilted to the upside, while in the slightly bigger picture, China’s reopening may be an extra variable with a positive sign. China is the world’s top crude importer while Canada holds the fourth place in terms of production. Thus, any increase in crude demand due to China’s reopening may well benefit the Canadian economy and thereby the Loonie.

From a technical standpoint, the outlook of dollar/loonie could darken upon a break below the 1.3225 zone, which provided support back in November and acted as resistance in July. This may encourage the bears to dive all the way down to the low of September 13, at 1.2950.

For the picture to brighten again, the bulls may need to overcome the 1.3700 obstacle, which provided strong resistance in December. Such a rebound could initially pave the way towards the peak of November at 1.3810, the break of which set the stage for extensions towards the two-and-a-half-year high of 1.3980, hit on October 9.