The Canadian dollar gained on Wednesday after the U.S. Federal Reserve ended its two day Federal Open Market Committee (FOMC) meeting and left the benchmark borrowing rate untouched at 100–125 basis points. The move was expected by the market with investors looking ahead to the December meeting for a third rate hike in 2017.

The loonie gained back some of the losses in the week, but it still down 0.49 in a weekly basis. The Canadian currency reached a high after the surprise rate hike by the Bank of Canada (BoC) on September 6 took the benchmark interest rate back to 1.00 percent. Governor Poloz had proactively cut twice in 2015 to help the Canadian economy withstand the fall in oil prices. With a more stable energy market and a strong economic growth the BoC withdrew that stimulus.

The contraction of Canada’s monthly GDP by 0.1 percent in August had been foretold by various indicators. The Canadian economy was slowing down and the tone of the central bank was changing from the hawkish tone seen in the summer.

Growth in the United States in the meanwhile has been strong with the only concern for the Fed the persistent low inflation. It is that inflation that divides the FOMC ahead of the December meeting. The Fed has surprised this year by ditching the cautious script from years past and into a more proactive role. Chair Yellen has said that at this point waiting on raising rates could be more harmful. The December rate hike could end up being the last monetary policy action from Yellen. She is not a favourite to retain her Chair position. The Fed’s Jerome Powell and Stanford’s John Taylor are now in the lead, with the scenario of one become Vice Chair and the other Chair a growing possibility. 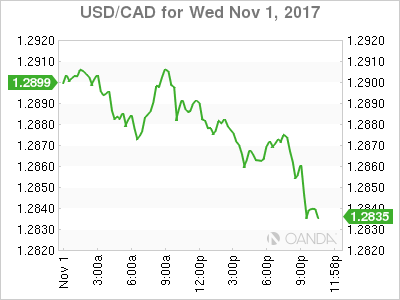 The USD/CAD lost 0.11 percent on Wednesday. The currency is trading at 1.2870 after the Federal Open Market Committee (FOMC) statement saw the Fed hold interest rates again. The lack of new information on what the Fed will do on December make it easier for the loonie to recover some of the lost ground.

Canadian manufacturing showed more signs of slowdown. Manufacturing PMI fell to 54.3 and is now the lowest it has been since January. The reading is still above 50, which is the gauge of growth. Weather related shortages in the United States affected Canadian companies. 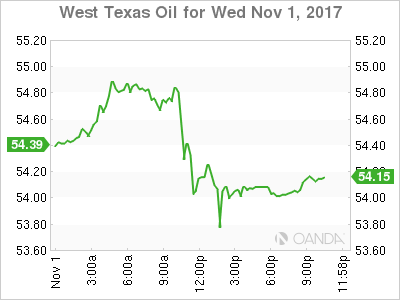 Oil prices fell slightly in the last 24 hours. The price of West Texas Intermediate is trading at $54.06 on a day with see-saw trade action after the American Petrol Institute released on Tuesday night had created anticipation around a 5.1 million barrel drawdown. The Energy Information Administration (EIA) weekly crude inventories showed a larger than forecasted 2.4 million barrels but still short of the API shortfall which prompted a correction in prices.

The cuts to production agreed by Organization of the Petroleum Exporting Countries (OPEC) and other major producers have achieved stability in the oil market and the promise of extending those cuts have taken oil prices to mid 2015 levels. Doubts still remain on how much demand has really recovered. The stability in prices can be easily disrupted as soon as the US shale industry shakes off the effects of the hurricane season and increases the rig count to take advantage of the rising price of crude.