The Dollar found itself vulnerable to heavy losses on Wednesday evening, after minutes from the latest FOMC meeting illustrated concerns among policymakers over the inflation outlook.

Although Federal Reserve official expressed optimism over economic growth and expected interest rates to be raised in the ‘near term’, there was still growing concerns over the prolonged periods of stubbornly low inflation in the U.S. The anxiety over low inflation questions the central bank’s ability to raise interest rates three times in 2018,consequently clouding the prospects of higher rates beyond this year. With expectations saturated over the Fed pulling the trigger before year-end, there is likely to be an increasing focus on economic data ahead of December’s policy meeting. There is a suspicion that investors will closely scrutinize December’s FOMC meeting for fresh insights on monetary policy in 2018 and whether economic projections are trimmed down.

Taking a look at the technical picture, the Dollar was already gasping for air into the Thanksgiving holiday, with the dovish FOMC minutes dealing the knockout blow. The Dollar Index is under pressure on the daily charts with resistance found at 94.00. Bears have broken below the 93.50 level, with the next levels of interest at 93.00 and 92.80, respectively.

Sterling traded within a modest range on Wednesday afternoon, after traders simply snoozed through the U.K. budget statement.

Some bearish action was seen after the Office for Budget Responsibility (OBR) downgraded growth forecast for this year as well as coming years through 2022. With gross domestic product forecasted to grow by 1.5% in 2017, compared with the 2.0% forecast in March, this was a blow to sentiment towards the U.K. economy. Interestingly, losses on Sterling were swiftly erased after Hammond announced stamp duty for first-time buyers on properties of up to £300,000 would be scrapped. With the Brexit related uncertainty impacting economic growth and weighing on sentiment, Sterling still has a tough path to navigate.

Today’s main event risk for Sterling will be the second estimate of the third quarter U.K. GDP which is expected to remain unchanged at 0.4%. A reading below market estimates may invite bears back into the party.

Taking a careful look at the British Pound, investors should be under no illusion that the appreciation witnessed yesterday, had anything to do with a change of sentiment towards the currency. The culprit behind the GBPUSD’s sharp appreciation was a vulnerable U.S. Dollar. Although prices have broken above the 1.3300, it may take more than a weaker Dollar for the current upside to continue long term. Technically, an intraday breakout above 1.3340 could trigger an incline towards 1.3370. Alternatively sustained weakness below 1.3300 should open a path back towards 1.3230. 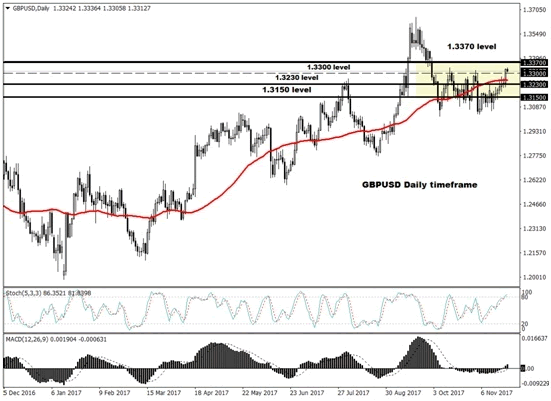 Gold prices marched above the $1289 level during Wednesday’s trading session, after the U.S. Dollar weakened. With investors now questioning the Federal Reserve’s ability to raise rates further in 2018 amid inflation concerns, Gold which is zero-yielding-has received a boost. Taking a look at the technical picture, the breakout above $1289 could encourage a further incline towards the $1300 psychological level. Alternatively, a failure for bulls to keep above $1289 may open a path lower towards $1280. 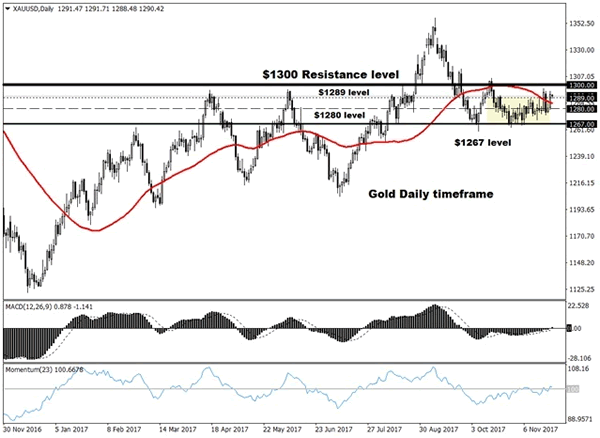