US Tax Bill Heads For Vote, Aussie Up On Mostly Upbeat RBA Minutes

FOREX: The dollar was slightly lower versus a basket of currencies as trading conditions were getting thinner ahead of the holiday period and attention remained on the tax story in the US. The antipodeans kept edging higher versus the greenback though their gains were subdued on a day with no sharp movements among major pairs.

STOCKS: The Nikkei 225 finished 0.15% lower on the day, while the Hang Seng traded higher by 0.9% at 0726 GMT; equities in mainland China and Australia edged higher. Euro Stoxx 50 futures were 0.1% down. Dow, S&P 500 and Nasdaq 100 futures were not much changed; all three gauges closed at record highs the preceding day on growing optimism for the delivery of tax cuts. 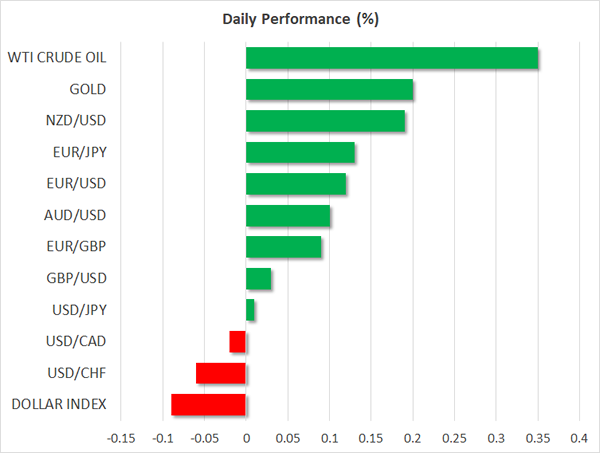 The dollar’s index against a basket of currencies was slightly down at 93.63 after retreating by 0.25% the preceding day. There is optimism among proponents of tax reform that the relevant bill would pass into law. However, there are also doubts by analysts on whether it would have a long-term positive effect on economic growth.

The House of Representatives is expected to vote in favor of the tax bill today, with a Senate vote likely to follow either later today, or on Wednesday. It should also be mentioned that trading activity is getting lighter as we’re getting closer to Christmas holidays.

The kiwi, which added 2.2% versus the greenback in the week that preceded, was 0.2% higher relative to the US currency at 0.7005. Aussie/dollar was up by 0.1% at 0.7667, trading around six-week high levels as minutes from the RBA’s latest meeting showed the central bank being more confident about the economy’s prospects, though it still expressed concerns on consumer spending. 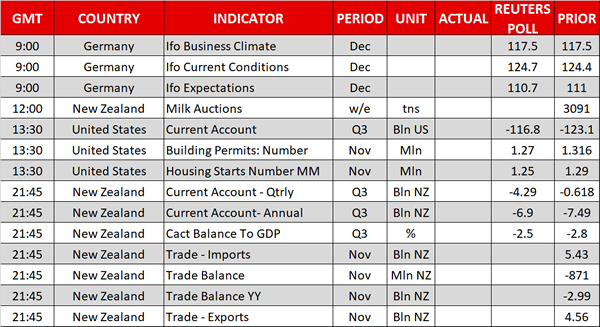 The US tax bill will go through the House of Representatives on Tuesday around 1830 GMT for a crucial vote aiming – according to its proponents – to benefit individuals and businesses with massive tax cuts. Then, Senate lawmakers are also anticipated to vote on the bill either later on Tuesday or Wednesday. Expectations are for the tax reforms to turn into law, with positive sentiment on the tax code strengthening on Monday after two Senate Republicans agreed to back the legislation.

Meanwhile, the US Department of Commerce and the Bureau of Economic Analysis are scheduled to publish housing data and readings on the current account at 1330 GMT. Analysts expect the current account to improve from -$123.1 billion to -$116.8 billion in the third quarter, while they also forecast a slowdown in November’s building permits and housing starts. The number of building permits and new constructions are said to decline by 0.04 million to 1.27 million (-3.1% m/m) and by 1.25 million respectively (-3.2% m/m).

In Germany, the Ifo business climate index, which rates current business conditions and measures expectations for the next six months will be available at 0900 GMT. Particularly, higher assessments on the current business environment are expected to drive the index to a fresh record high at 117.5.

At 2145 GMT, New Zealand will release figures on current account and trade activities. Year-on-year, the current account is forecasted to rise by NZ$0.59 billion to -NZ$6.90 billion in the third quarter, whereas on a quarterly basis the deficit is anticipated to widen to -NZ$4.290 billion (six times larger than in the previous quarter).

Moreover, global dairy auction data are due today (the release however is tentative without a specific time of release), bringing some volatility to the kiwi.

In energy markets, investors will be waiting for the API weekly report to indicate the change in US crude oil stocks for the week ending December 15. 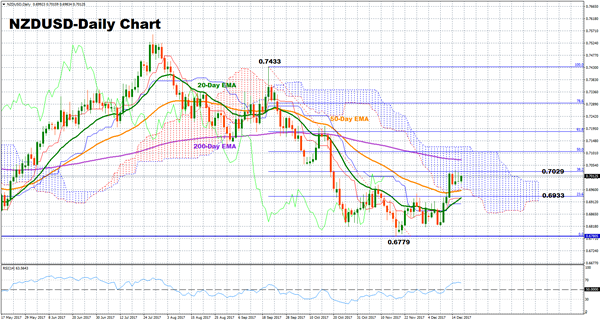 NZDUSD broke above 0.70 for the first time in two months after consolidating not far above multi-month low levels in preceding weeks. The RSI is heading higher, moving above the 50 neutral-perceived level though its ascent has eased somewhat in recent days, suggesting that bullish movements are more likely to emerge in the near-term but ones that are softer in nature.

Trading activity is currently taking place inside the Ichimoku cloud.