Dollar In Recovery Mode, UK Inflation In The Spotlight

FOREX: The dollar managed to recover a part of the previous days’ losses against a basket of currencies that saw it eventually fall to a three-year low during Monday’s trading.

COMMODITIES: WTI was up by 0.2% and Brent crude traded lower by 0.5%. The former was trading not far below a fresh three-year high of $64.89 per barrel hit earlier in the day, while despite the decline Brent was still relatively close to $70.37, its highest since late 2014 recorded on Monday. Gold was little changed at $1,338.71 per ounce, trading around four-month high levels. 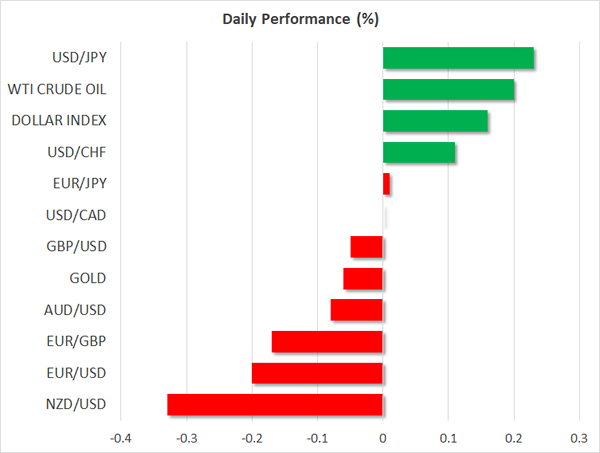 The dollar index, which gauges the greenback against a basket of currencies, was at 90.60, having gained around 0.2%. This compares to yesterday’s 90.46, its lowest since early 2015. The yen lost some ground versus the greenback on worries Japanese authorities may wish to curb the currency’s gains. Those concerns were fueled by some comments by Japanese Finance Minister Taro Aso.

The euro, another major gainer in recent days versus the US currency, retreated a bit, though euro/dollar still remained comfortably above the 1.22 level. On Monday the pair recorded a three-year high of 1.2296 as expectations of ECB tightening – also supported yesterday by remarks by the Estonian central bank chief – and optimism on eurozone’s growth boosted the currency.

Pound/dollar which hit a post-Brexit referendum high of 1.3819 on Monday’s trading, retreated slightly in today’s trading. Aussie/dollar and kiwi/dollar, which yesterday tracked fresh four-month highs, were declining today, most notably kiwi/dollar after a survey by think-tank NZIER showed business sentiment in New Zealand falling to a two-year low in Q4 on the back of pessimism towards the country’s Labour-led government.

Also in focus is dollar/yuan, which is trading around two-year low levels and has some speculating that the Chinese government might intervene to limit the yuan’s gains. 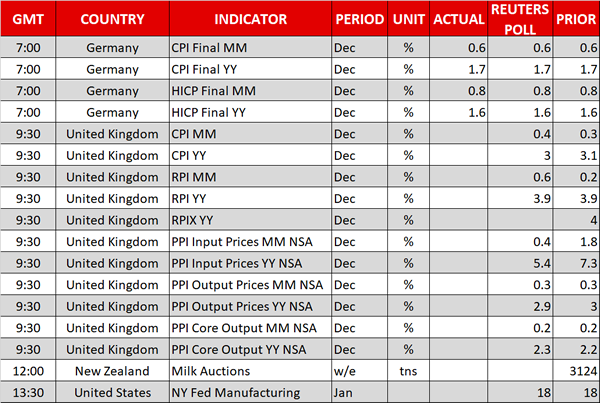 Day ahead: UK inflation expected to ease in December

The UK will publish readings on inflation measures for the month of December including consumer, producer, and retail price indices. However, investors will be mostly paying attention on the CPI measure as this is closely watched by BOE policymakers, the UK central bank’s target for inflation is 2.0%.

According to forecasts, British consumer prices due at 0930 GMT are said to rise by 3.0% y/y in December after reaching the highest growth of 3.1% seen in over four years in the month that preceded. BOE Governor Mark Carney had to write an explanatory letter to the finance minister in when the measure surpassed 3.0% in the previous month, more than 1.0% above the BoE target. If inflation surprises to the upside, not only Carney would have to put his pen on the paper again but also consider whether another rate hike is appropriate.

The New York Empire State Manufacturing index, which tracks business conditions in the state of New York, is scheduled for release at 1330 GMT. Analysts anticipate the index to stand flat at +18 in January.

In commodities, changes in global dairy prices are expected to be reported today, bringing some volatility to the kiwi as New Zealand’s exports are heavily depended on dairy products. The release is tentative though, without a specific time of release. 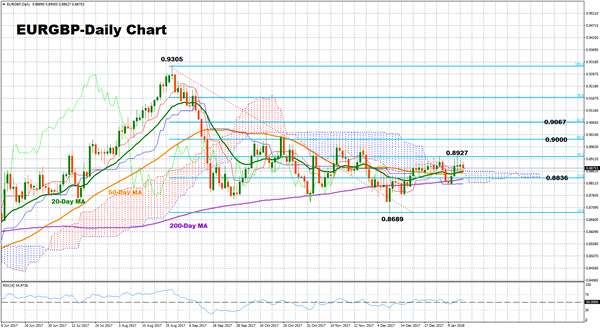 EURGBP looks neutral in the short-term, moving within a relatively narrow range in recent days. The RSI is moving sideways, not far above the 50 neutral-perceived level, pointing to neutrality in the short-term.

Today’s inflation figures out of the UK have the capacity to move the pair in either direction.