Euro Retreats After Breaking Above $1.23, Bank Of Canada Eyed

FOREX: The dollar – as gauged relative to six other currencies – is on the rise after recording its lowest since late 2014 earlier on Wednesday. The euro retreated after climbing above $1.23.

STOCKS: The Japanese Nikkei 225 and Topix indices lost 0.35% and 0.2% respectively after yesterday tracking multidecade highs. Hong Kong’s Hang Seng was little changed at decade high levels. Euro Stoxx 50 futures traded lower by 0.3% at 0727 GMT. Dow futures were up by 0.2%, with S&P 500 and Nasdaq 100 equivalents also in the green, albeit slightly so. It was a bumpy ride yesterday during the US session, with the Dow, S&P 500 and the Nasdaq Composite giving up earlier gains that saw them post record highs. Bank of America and Goldman Sachs will be among US companies releasing quarterly earnings today. 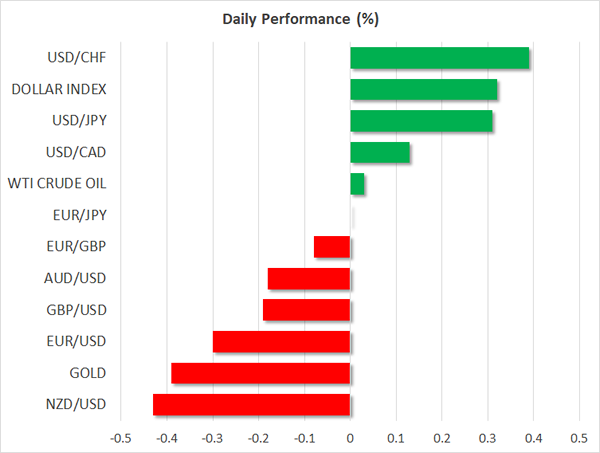 The dollar index was 0.3% up at 90.68 after earlier falling to 90.11, this being a fresh three-year low. Rising market expectations of monetary policy normalization on behalf of central banks other than the Fed was viewed as the catalyst behind the US currency’s recent retreat.

Dollar/yen was 0.3% higher at 110.76. The pair declined in the six trading days that preceded.

Euro/dollar was 0.3% down at 1.2227. Market participants’ sentiment on the pair may not be as bullish after the setbacks in German Chancellor Merkel’s efforts to revive a coalition with the Social Democrats, though it is notable the pair remains above the 1.22 handle, maintaining most of its recent gains. It is also of note that before the decline the pair recorded its highest since December 2014 of 1.2323.

Indicative of the dollar’s rebound on Wednesday: the commodity-linked currencies – the loonie, aussie and the kiwi – were all losing ground relative to their US counterpart, with the same holding true for sterling.

However, the greenback continued trading around two-year lows versus the Chinese yuan as the PBOC altered its fixing, setting its firmest midpoint since 2015. Thursday will see the release of important data out of China, including on Q4 2017 GDP.

Day ahead: Bank of Canada decides on interest rates; US economic data and Fed speeches awaited

A policy meeting by the Bank of Canada (BOC) will be in immediate focus on Wednesday as BOC policymakers are said to start the year with a rate hike. Particularly, analysts predict the central bank to increase benchmark borrowing costs by 0.25 basis points to 1.25% despite inflation being still below the BOC target of 2.0%. Besides that, investors will be eager to hear any clues on the path of future monetary policy tightening given risks arising from looming NAFTA negotiations and an overloaded household debt. The rate decision will be announced at 1500 GMT, while a monetary policy report will be also submitted at the same time followed by a press conference held by the BOC Governor, Stephen Poloz, and the Deputy Governor, Carolyn Wilkins.

Meanwhile in the Eurozone, final inflation numbers will be out at 1000 GMT, with analysts anticipating the CPI to remain at 1.4% y/y in December as was earlier forecasted. However, January’s flash estimates due on January 31 will be of greater importance for the euro.

In the US, the dollar is likely to see some volatility as a number of agencies are preparing to publish economic data today during the afternoon European trading session, while later on, Fed members will be giving public speeches.

In terms of data, the Fed is scheduled to release monthly readings on US industrial production for the month of December at 1415 GMT, probably showing some improvement in the value of industrial output. Then at 1500 GMT, the National Association of Home Builders will publish its January Housing Market Index which measures the level of current and future home sales. In December, the gauge hit its highest level seen since 1999.

At 2130, the API weekly figures on the US crude oil inventories will also be under review.

Turning to public appearances, Michael Saunders, a member of the Bank of England’s monetary policy committee will speak first at 1145 GMT. Then at 2000 GMT, the Chicago Fed President, Charles Evans, will give comments on current economic conditions before the FOMC member and the Cleveland Fed President, Loretta Mester, gives a presentation on monetary policy communication at 2130 GMT. 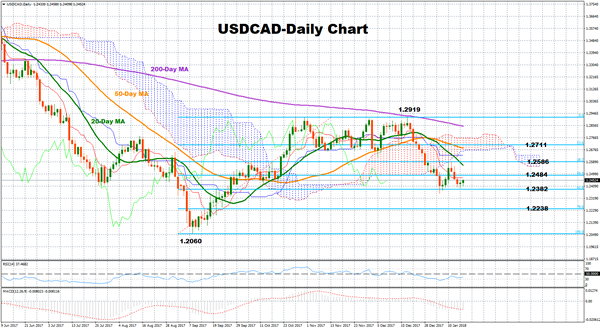 USDCAD stalled its downtrend near 3½-month lows but negative risks have not faded yet in the short-term as the bearish cross between the 20- and the 50-day moving averages is still in place. However, the pair might keep consolidating as indicated by the RSI which is moving sideways.

An extension to the downside, probably triggered by any hawkish messages delivered by the Bank of Canada today, could meet the 61.8% Fibonacci retracement level at 1.2382 of the upleg from 1.2060 to 1.2919 (September-December). Further below, additional support might come around the 78.6% Fibonacci at 1.2238.

On the other hand, if the BOC holds interest rates steady or expresses doubts about the path of future monetary policy tightening, the pair would likely break above the 50% Fibonacci at 1.2484 and move towards the 20-day MA at 1.2564 before it meets the 38.2% Fibonacci at 1.2586, all these being potential levels of resistance.