FOREX: The US dollar index continued to recover on Thursday, trading nearly 0.4% higher and extending the gains it posted on Wednesday on the back of rising US treasury yields.

STOCKS: Asian markets were mixed. Japan’s Nikkei 225 and Topix indices fell by 0.4% and 0.7% respectively, while Hong Kong’s Hang Seng index was up 0.4%. In Europe, futures tracking the Euro Stoxx 50 are in positive territory, suggesting the index could open higher. Over in the US, the three major equity indices – the Dow Jones, S&P 500 and Nasdaq Composite – all closed in the green. Specifically, the Dow advanced an astonishing 1.25% and closed above the milestone of 26000, at a fresh record high. Meanwhile, the S&P and Nasdaq closed just shy of their all-time highs. Futures tracking the Dow, S&P, and Nasdaq 100 are all currently in the green, albeit marginally.

COMMODITIES: In energy markets, both WTI and Brent crude prices drifted slightly lower during the Asian session Thursday. Despite pulling back somewhat, WTI and Brent are still hovering near multi-year highs, supported by a broadly weak US dollar despite the rise over the last couple of days, declining US inventories, risks of supply disruptions in Nigeria, and expectations that major oil producers could extend their current output-cut deal again. In this respect, Russian Energy minister Alexander Novak said yesterday that the oil market is not balanced yet, helping to calm the nerves of those speculating that the OPEC-led supply cuts may be unwound this year. In precious metals, gold edged 0.1% lower, after declining yesterday as well. 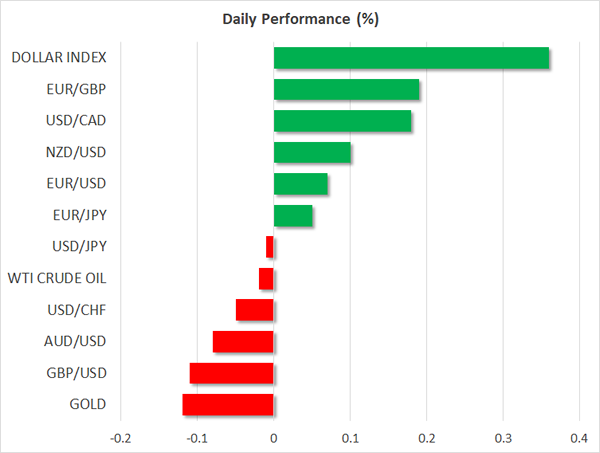 The Bank of Canada (BoC) hiked its benchmark interest rate by a quarter point yesterday to 1.25%, as was widely anticipated. The accompanying statement maintained a relatively cautious tone on further rate hikes, indicating that NAFTA uncertainties are ‘weighing increasingly’ on the outlook and that even though wages have picked up, they are rising by less than would be typical in this environment. The key message from the BoC was that despite hiking now, any future rate adjustments will likely depend on the evolution of incoming data and how the NAFTA negotiations play out. Interestingly enough, market pricing continues to suggest the Bank will hike two more times this year, with the next rate increase being fully priced in by May, according to Canada’s overnight index swaps. The loonie plunged initially on the decision as this was interpreted as a ‘dovish hike’, but recovered its losses almost instantly to trade more or less unchanged against the dollar in the following hours.

The dollar index – which measures the greenback’s performance against a basket of six major currencies- was up nearly 0.4% today, extending the gains it posted on Wednesday. With no clear fundamental catalyst behind the dollar’s recovery, the move is being attributed to the spike higher in US Treasury yields yesterday. Higher bond yields are usually positive for a currency, as bonds become more attractive to hold for investors seeking a higher return.

Elsewhere, sterling surged yesterday amid heightened optimism that the EU and the UK will agree on a transitional Brexit deal soon, perhaps by the end of the month.

Meanwhile, the euro tumbled somewhat on Wednesday, after key ECB members voiced their discomfort with the currency’s recent appreciation. ECB Vice President Vitor Constancio said that he is concerned about sudden exchange rate movements which do not reflect fundamentals, while Governing Council member Ewald Nowotny noted that a strengthening euro is ‘not helpful’. These remarks may have served as a reminder that the ECB is unlikely to sit idle and allow the euro to appreciate rapidly, as that could make it more difficult for inflation to return to its target in a sustainable manner. 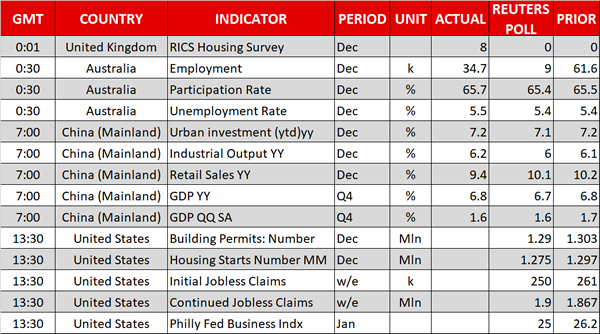 Day ahead: US data on housing & jobless claims as earnings season continues

Some releases out of the US could spur positioning on the dollar during Thursday’s trading: the number of housing starts and building permits for the month of December will be made public at 1330 GMT; in November they stood at a more than a decade high and it will be interesting to see if momentum is maintained. It should be said that weather conditions in the US in late 2017 are expected to have played a role, weighing on the number of housing starts. At the same time, weekly data on initial and continued jobless claims will be released. Individuals applying for unemployment benefits for the first time are expected to fall to 250k from the previous week’s 261k which was a more than a three-month high and marked the fourth consecutive week of rises; though the number was still below the 300k mark that is linked to a robust jobs market. The Philly Fed’s Business index is also scheduled for release at 1330 GMT.

Canada will see the release of the ADP nonfarm employment change report at 1330 GMT. This is not typically a market mover though.

Cleveland Fed President Loretta Mester – an FOMC voting member in 2018 – will be speaking on monetary policy at 2305 GMT.

Oil prices could see some volatility when the Energy Information Administration releases its report including information on US crude stocks for the week ending January 12 at 1600 GMT. Crude inventories are forecast to decline by around 3.6 million barrels, registering their ninth straight weekly decline. This compares to a fall by around 4.9m barrels in the week that preceded.

In stock markets, the earnings season continues with Morgan Stanley being among US companies releasing results today. 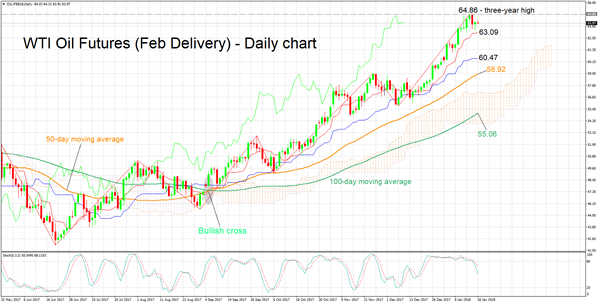 WTI oil futures for February delivery continue to trade not far below 64.86, the highest since late December 2014 hit on Monday. The Tenkan- and Kijun-sen lines remain positively aligned, suggesting that the bullish bias in the short-term is still in place. Notice though that the Kijun-sen has flatlined, this perhaps being an indication that positive momentum is losing steam. Also – looking at the stochastics – the %K line has crossed below the slow %D line, with both lines heading lower. This is a bearish signal in the very short-term.

Should the EIA’s report show a larger-than-forecasted drawdown in crude stockpiles, oil prices could head higher. In this case, immediate resistance could come around Monday’s high of 64.86.

On the other hand, a smaller-than-anticipated decline in crude inventories – or a rise of course – is expected to weaken prices. In this scenario, the range around the Tenkan-sen at 63.09 would be eyed as potential support.