FOREX: The yen extended its uptrend against the dollar, sending dollar/yen lower to 109.10 as investors maintained their risk-averse behavior after the recent sell-off in stock markets. The dollar index, though, was building positive momentum on the back of a weaker euro and pound, climbing to 89.87 (+0.33%). Euro/dollar slipped to 1.2342 (-0.30%) and pound/dollar weakened to 1.3872 (-0.44%) after the ECB board member, Sabine Lautenschlaeger questioned whether the transitional period after Brexit will “really happen”, arguing that Britain-based banks have not yet submitted their license application to reallocate to the Euro area and the deadline was already ticking down. The antipodean currencies were on the backfoot as well. Aussie/dollar fell down to 0.7860 (-0.54%) and kiwi/dollar dropped to 0.7311 (-0.33%) ahead of the RBNZ policy meeting, unable to sustain gains from yesterday’s better-than-expected dairy prices and employment data. Dollar/swissie and dollar/loonie changed hands at 0.9398 (+0.43%) and 1.2513 (+0.20%) respectively.

STOCKS: European stocks managed to rebound after recent losses, following their US and Asian counterparts. The pan-European STOXX 600 and the blue-chip Euro STOXX 50 were almost 1.0% up at 1130 GMT, with every single sector comprising the indices being in the green. The German DAX 30 and the French CAC 40 were higher by 0.77%, the Italian FTSE MIB jumped by 1.05% and the British FTSE 100 increased by 0.75%. US stock futures were pointing to a positive open. 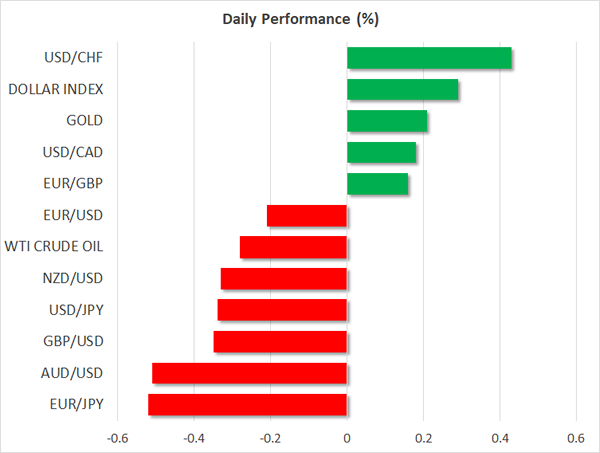 The aussie is viewed as a liquid proxy for China’s economy due to the two nations’ close economic ties – China is Australia’s largest export and import partner – and thus will also be gathering attention as the figures hit the markets.

Upbeat data could incentivize forex market participants to place long aussie/dollar positions. In this scenario, the pair might meet resistance around 0.7893, this being the 38.2% Fibonacci retracement level of the December 8 to January 26 upleg (0.7893 failed to provide support on the way down during Wednesday’s trading and could instead act as a barrier to the upside). This area also includes the 0.79 handle, a level of potential psychological significance. Further above, the focus would shift to the range around the 23.6% Fibonacci mark at 0.7986.

In case of weaker-than-anticipated figures however, aussie/dollar might head lower. Support in this case might come around the 50% Fibonacci mark at 0.7818 (including the 0.78 handle and the current level of the 50-day moving average). Steeper declines would shift the focus to the 61.8% Fibonacci level at 0.7743. Notice that the current level of the 200-day MA roughly coincides with this point. It should be pointed out that there is negative momentum at the moment for AUDUSD, with the pair looking set to finish the day lower on Wednesday after declining in all but one of the preceding seven trading days.

The Worst For China Could Be Over