Today’s release of the US February jobs report may be exactly what stocks bulls wanted in the way of goldilocks economic growth. Steady tightening in labour markets without inflationary growth in pay growth. The 313,000 increase in non-farm payrolls was the highest since July 2016, the unemployment rate held at 4.1% for the fifth consecutive month, while average hourly earnings growth eased to 2.6% y/y from the market-shaking 2.9% –which was revised down to 2.8%.

No game-changer for the Fed

It may be too early to write about this month’s FOMC meeting, which carries a 100% chance of a 25-bp rate hike in the Fed Funds rate target. But the more important question is will the Fed’s dot plot shift members’ views in favour of four Fed hikes for the year from the current three hikes. Today’s earnings data suggests that will not be the case.

Recall that the 2.9% y/y rise seen in the January earnings was emerged with scepticism due to weather-induced decline in average weekly hours. The subsequent pullback to 2.6%, coupled with the fact that the Fed’s inflation target remains at 1.5% does not call for an upgrade in the pace of Fed tightening.

No game-changer for USD

Since FX markets run on expectations, nothing in today’s jobs report or recent US data provide traders to alter their outlook based on faster Fed tightening. Thursday’s ECB press conference highlighted how the central bank faces increasing difficulty at convincing the world that plenty of accommodation remains. In contrast, Fed hawks are at difficulty in justifying faster tightening at a time when the ascent in earnings may reflect a possible end-of cycle phenomenon – a lagging indicator in labour markets.

Today’s report is a fresh confirmation of the status quo (3 Fed hikes in 2018) instead of increasing the odds of a 4th rate hike. With core PCE steady at 1.5% and ascending bond yields looming large over an aggressive Treasury borrowing schedule, it best to not rock the boat. EUR/USD remains closer to $1.35 than it is to $1.15. 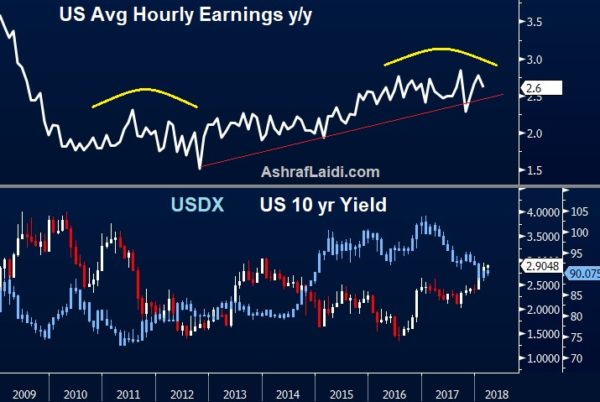 Will The BoJ And The ECB Join The Fed Or Show Strategic Prudence?

US Consumer Price Inflation: Steady as She Goes